Exactly a month ago war broke out in Ukraine,  the first on this scale in Europe since World War II. AFP journalists recount how they covered a conflict that has also shaken their own lives.

“Son of a bitch”, “emmerder”, “grab 'em by the pussy”...  How exactly do you translate a swear word uttered by the French president or any other political figure, so that an American, Spanish or Argentinian reader really gets the gist? Similarly, how to translate a profanity said by an American president for the benefit of francophone readers? Every time a head of state uses an expletive, the result is instant head-scratching and intense debate in the newsroom, explains Sebastien Blanc, head of AFP's French editing desk in Washington, with the input from his English-, Spanish-, and Arabic-speaking colleagues. AFP's first advance team arrived in Beijing on January 11, to set up the agency's technical infrastructure to cover the Winter Olympics, from Feb 4-20. Without them not a single story, photo or video would ever reach clients. But before getting down to work in Beijing, Karim Menasria, François-Xavier Marit and Antonin Thuillier had to pass the first test for everyone coming for the Games: fulfil the ultra-strict requirements to enter the Covid-free 'bubble' put in place by Chinese authorities. And the test started weeks before they even arrived.

"To see her so shaken brought tears to my eyes. I started crying for the first time during an interview. It never happened before in my career, even in the worst situations. Behind the video camera, my colleague Justine stopped filming. Photographer Adek put down her camera. The despair of Rada had taken hold of the room and gave shape to those of Afghan women," writes Anne Chaon, recently returned from Afghanistan, where she met women fearing for the freedoms won over 20 years, or even their lives, as the Taliban gains ground every day. 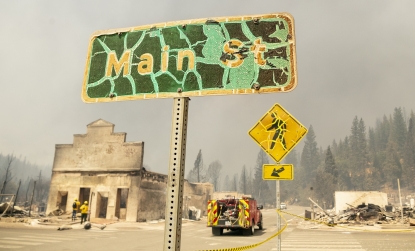 "I’ve been photographing wildfires for years and I have to say, the Dixie fire is a beast," says photographer Josh Edelson, who witnessed first-hand the destruction of Greenville, California and produced an innovative set of 'before and after' shots that powerfully capture the destruction visited upon the town.