At the heart of the epidemic

"Every time I enter a building nowadays, I say a little silent prayer before a little plastic gun is pointed at my head," writes Patrick Baert, AFP's Beijing bureau chief. "After all, the contraption literally holds the key to whether I get in or not."

"Welcome to life in the time of the novel coronavirus in Beijing." 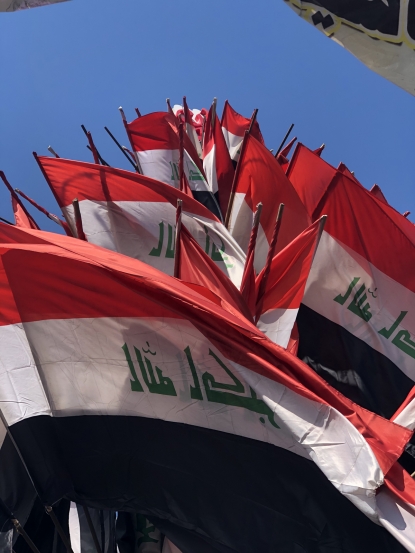 "When the novel coronavirus started spreading in neighboring Iran in February, Iraqis immediately turned to sarcasm. One comment stood out: what could it possibly do to us? We have seen it all," writes Mohamad Ali Harissi, deputy bureau chief for the Gulf and Yemen.

"It was my first time back in Baghdad since being posted there in 2014. The city was so different. Yet it hadn’t changed at all."

Hong Kong -- A friend of a friend in Hong Kong recently said that he didn’t believe the novel coronavirus could be transferred from human to human through airborne droplets. The young, educated professional said this confidently, without irony, to a group of colleagues while wearing a disposable face mask. His source for the claim? A WhatsApp group message that cited an unknown doctor. I was stunned when my friend told me the story. An educated professional falling for such blatant misinformation?

"A satellite photo showing the extent of Australia’s bushfires? No, a graphic generated using NASA’s data. A kangaroo cuddling up to researchers after escaping the fires? No, he was actually thousands of miles away from the blazes, hugging a carer at a wildlife sanctuary. Wombats showed “real leadership” during the crisis by inviting other animals to hide in their burrows? They’ve allowed intruders in their burrows for eons," writes Esther Chan, a digital verification editor in AFP's Sydney bureau.

"As the bushfires spread with unprecedented speed and ferocity in Australia, so had misinformation. In fact the cesspool of rumours, hoaxes and conspiracy theories matched the infernos in their intensity and scale."

"For weeks I’d been dreaming of blue skies and the smell of eucalyptus in the air," writes Glenda Kwek, an Australia native on a post in India. "I was shivering through one of New Delhi’s coldest winters in a century and one of its worst air pollution seasons in recent years and all I could think about was upcoming Christmas trip home to Australia -- fresh air, soft, sand beaches warmed by the summer sun."

"The scene that greeted me was starkly different."