Ukraine: the battle to report the war

Dodging incoming shells is one thing, but AFP journalists covering the war in Ukraine have had to deal with a whole host of other threats, from attempts to control what they report to a civilian pulling a knife on them.

Here nearly a dozen of our special correspondents, many veterans of several conflicts, reveal the difficulties and frustrations of reporting from the front lines

There is the obvious and ever-present danger. That never goes away. Yet what also worries AFP journalists covering the war in Ukraine is the obstacles they face in getting to the front, and what they are allowed to show when they get there.

First they have to deal with the Ukrainian army, which gives – and sometimes withdraws – the passes they need to get through the checkpoints to the battle zones or into newly-liberated areas. 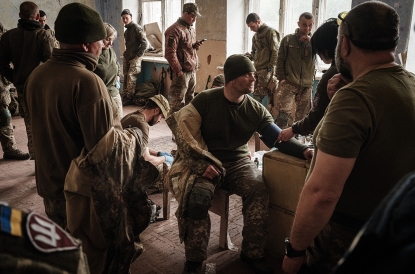 Ukrainian soldiers receive medical treatment in an abandoned building near Kramatorsk after fighting on the front line in the east for two months. April 30, 2022 (AFP / Yasuyoshi Chiba)

“It’s really difficult to work,” said Dimitar Dilkoff, a Bulgarian photographer who was based in Moscow until the Russian invasion, and has done several stints in Ukraine since.

Just “taking a photo can get very complicated”, he said. “If you take a photo or video and publish it, it is very easy for the other side to find the exact location and shell the place.” Sometimes you have to spend a “lot of time explaining that you’re not planning to use the photo, that maybe we will keep it for our archives.”

“The (Ukrainian) army wants you to record what they want,” said Aris Messinis, an AFP photographer in Athens, who has worked in Ukraine on and off since 2014 when Russia annexed Crimea. And that usually is some “success”.

But when they are “losses, they won’t let them be seen, even if it’s injured soldiers, not just dead ones. They don’t want to harm the morale of the public or of the rest of the army,” he said.

“There’s a constant threat that if you go somewhere they don’t want you to go, or if you're reporting where they don't want you to report, that you could lose the accreditation,” said Dave Clark, AFP’s Brussels deputy bureau chief, who has covered numerous conflicts over two decades. 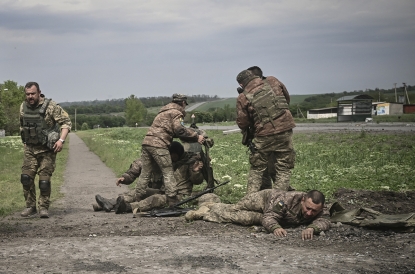 Ukrainian troops help wounded comrades not far from the front line in the Donbas, eastern Ukrainian, on May 21, 2022 (AFP / Aris Messinis)

To protect its journalists, and lower the risk of losing the accreditations they need, AFP sometimes waits before putting out some images, hazes their exact location or finds other ways to work around the army, said Arman Soldin, a video journalist normally based in London.

“You have to walk a fine line, pushing to get as close as possible to the story while not burning bridges with the Ukrainian army,” said Dylan Collins, another video journalist based in Beirut.

Relationships have been built up over time with some army units, allowing access that would have been impossible before.

“We now have an excellent relationship (with some), including with commanders and ordinary soldiers on the ground,” said Daphne Rousseau, a text journalist based in Paris who has done three reporting stints on the front since February. “We follow them, we stay in touch, we send each other Signal (messages),” she said.

It was thanks to such contacts that an AFP team managed to go on a mission to recover the bodies of dead Ukrainian soldiers with a specialised unit in October in Svyatogirsk in the Donetsk region. Another team followed paramedics bringing injured troops back from the “meat grinder” around Bakhmut, the scene of some of the bloodiest fighting in the Donbas. 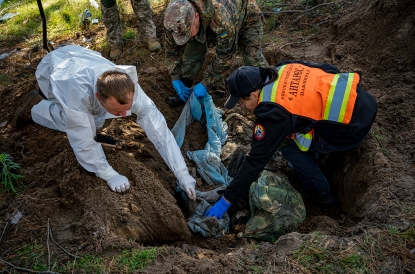 Ukrainian experts exhume the body of a dead soldier in the backyard of a house in the village of Oleksandr, eastern Ukraine, on October 16, 2022 (AFP / Dimitar Dilkoff)

But for Emmanuel Peuchot, who has coordinated the work of AFP’s Kyiv bureau since October, these hard-won concessions are too rare to truly show the scale of the “butchery” on the battlefield, with neither side forthcoming with overall casualty figures.

Dealings with civilians can sometimes also be very tense, particularly in the Donbas region, which has endured eight years of fighting, and where many locals are pro-Russian.

All AFP journalists working in eastern Ukraine have come across hostility at one time or another, regardless of their nationality, with some locals blaming reporters for their areas being bombarded. 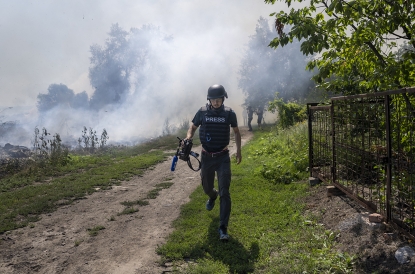 Video journalist Ionut Iordachescu runs for cover during Russian shelling near Bakhmut on July 31, 2022 after which a local attacked reporters with a knife (AFP / Bulent Kilic)

Istanbul-based photographer Bülent Kilic and video journalist Ionut Iordachescu, based in Romania, were attacked by a man with a knife in August after a cluster bomb landed close by. “It was scary,” said Iordachescu. “But in a way I cannot blame him. They’re traumatised.”

“To be honest, when the media arrive, they expect something to happen and maybe to see dead people,” said Kilic. “Being angry I can understand, (but) attacking with a knife is not acceptable.”

Fortunately, such animosity is not widespread. Indeed Collins found some locals are so accustomed to artillery fire they even stop “to answer (reporters’) questions despite the dangers of incoming shelling.”

And even in places like Bakhmut, where Clark said  “a lot of people shouted at us, you would always find somebody” willing to talk. 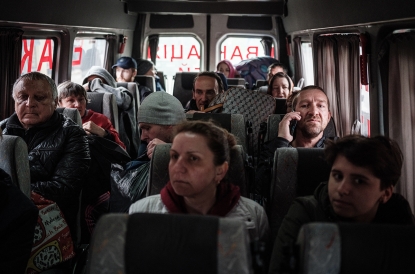 Civilians from the eastern Ukraine city of Lyman are evacuated on May 2, 2022 during a Russian push into the Donetsk region (AFP / Yasuyoshi Chiba)

In eastern Ukraine the conflict is less black and white than in Kyiv, Lviv or Odessa, where patriotic rhetoric is everywhere, said Cécile Feuillatre, who works in AFP’s international service in Paris. The line between friend and enemy is much less clear cut. “It’s what makes the Donbas so interesting; there are nuances,” she said.

The difference between “collaborators” and “patriotic” Ukrainians can be equally blurred, said Rousseau. In the Donbas town of Lyman, she was once introduced to a pillar of the local “resistance” by a Ukrainian police officer. But on her next trip there Rousseau learned the woman had later collaborated and left for Russia. Such about-turns can come down to which side is giving desperately needed aid.

In some recently-liberated towns such as Kherson, the search for “collaborators” can create a “really heavy atmosphere”, said Peuchot, when in reality ordinary people are much more ambivalent and “just want (the war) to finish”. 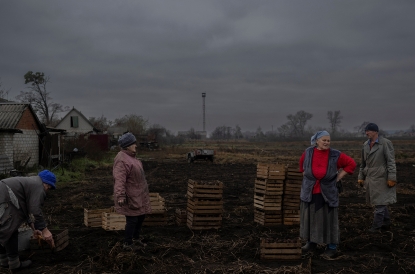 Locals near the front line in the Donbas region pick potatoes in a field near the village of Zarichne, eastern Ukrainian, on November 10, 2022. The woman in red was initially hostile to AFP journalists, saying both Ukraine and Russia had abandoned them (AFP / Bulent Kilic)

To understand the nuances, you have to talk to enough people, and that takes time, particularly when working with an interpreter. These nuances are all the more important when it is impossible to report directly from “the other side”, the Russian side, to balance our sources.

Russia has severely restricted access to its front lines. Despite having a bureau in Moscow for decades, repeated efforts to get authorisation to follow their troops or get access to their side of the front have failed. Even so, AFP journalists in Moscow continue to cover the conflict with Russian sources, but under tightened restrictions from the Kremlin.

“I would like to see the other side, but of course it’s impossible,” said Yasuyoshi Chiba, AFP’s chief photographer in Nairobi, who shot Ukrainian soldiers near Kharkiv. “But I think we are 100 percent doing what we can.” 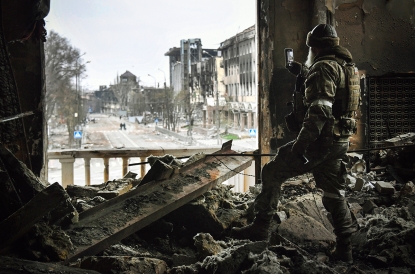 A Russian soldier photographed in the ruins of Mariupol's theatre on April 12, 2022 during an organised Russian media trip to the Ukrainian port on the Sea of Azov (AFP / Alexander Nemenov)

Moscow did organise some press trips to a few “conquered” towns such as Mariupol, Berdyansk and Kherson, before the latter was retaken by Ukraine. AFP took part in these as we were unable to enter those areas by any other means. All the visits were tightly-controlled and our stories made it clear how they were organised.

However, Ukrainian authorities made it plain they were “really upset” that we had gone on them, said Clark. You must not forget that an information war is going on between Moscow and Kyiv, said Rousseau, who said her seven years covering the Israeli-Palestinian conflict had been “hugely useful” in helping avoid being “taken in by what one side or the other are saying”.

Reporters on the ground are helped by AFP’s digital investigation service which checks, and often disproves, misinformation peddled on social media. 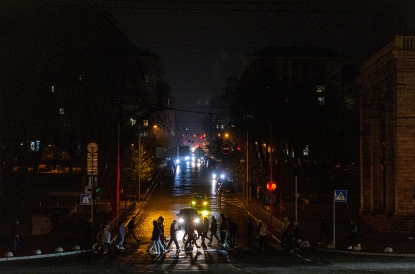 People cross a blacked-out street in downtown Kyiv on November 10, 2022 as weeks of Russian strikes on Ukraine's electricity grid cause power cuts in the capital (AFP / Dimitar Dilkoff)

‘Kyiv is another world’

In comparison with the heavy fighting in the south and east, Kyiv – where correspondents usually finish their reporting trips – is another world. Those who didn’t know Ukraine before the war often say how struck they are by the capital’s modern European feel, with hipster districts just like Paris or Berlin.

That relative normality has been shaken since Russian strikes began to intensify again, with Chiba’s photos of the first drone attacks on the capital in October going around the world. 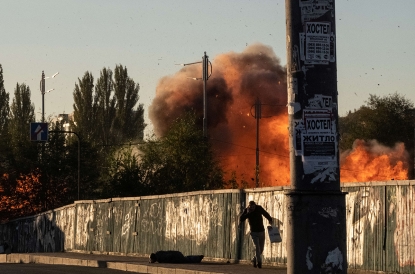 A man falls to the ground during a Russian drone attack on Kyiv on October 17, 2022 (AFP / Yasuyoshi Chiba)

With power and water supplies often cut, Kilic had to work by candlelight during his last trip in November. Yet he was still able to go and see young Ukrainians dancing in a nightclub.

“I have been searching for a picture of people kissing, showing their love for each other. Because in the conditions they face – with no electricity, no water, and missiles coming in – I see young people taking shelter in love.”

Like other photographers, he is trying to capture moments that will endure, that will tell us what it was like to live through this war years from now. 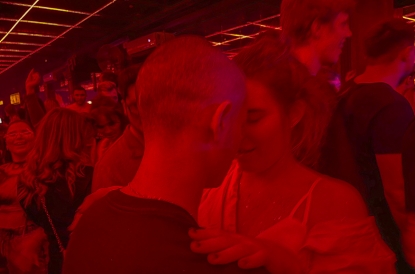 Not that anyone is expecting peace anytime soon. Even if the war no longer dominates the front pages of Western media as it once did,  most of the correspondents are eager to go back. “I feel guilty at the end of each mission because I can leave,” said Chiba. “People living in the basements – they can’t be released from that fear.”

Iordachescu has the same guilt. “There is news fatigue and I think that’s normal, because people cannot stay connected 24/7 to what’s happening in Ukraine.

“I see that even in my country, Romania, which is so close… But it’s a luxury that people in Ukraine don’t have. We need to continue to cover this war, and we have to be relentless in our efforts.” 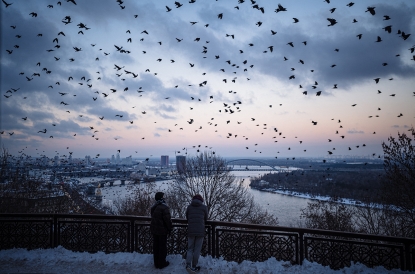 How AFP caught up with ‘The Serpent’