Freelance photographer based in Qamishli, Syria. 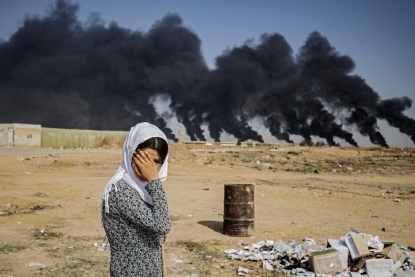 "When my son was born, we named him Avan. It means prosperous and thriving and I hoped the name would reflect the path his life would take," writes Delil Souleiman, a photographer in northern Syria.

"Now it’s a year later and I think -- how could you have given him a name like that? How can anyone have any hope amid all the devastation and destruction in my sad country?"

"The first thing I do when I come home from covering the front in Syria is go to my sister’s house to play with my one-year-old nephew Jan," writes Syria-based photographer Delil Souleiman.

"After bearing witness to so much misery, I feel happy being around him. But sometimes when I look at him -- smiling and laughing, well-fed, well-loved and safe -- the images of the kids I photographed in the conflict come back to haunt me. Barefoot children, covered in dust, their faces sad, putting up their hands to protect their eyes from the sandstorms. And I cringe in pain." 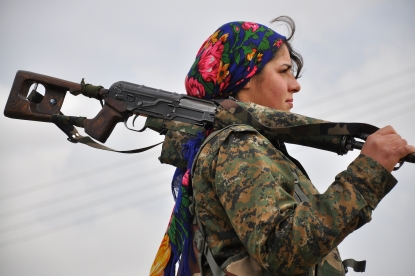 "When I photograph the women fighters fighting Daesh, it reassures me that there is justice in this world," writes photographer Delil Souleiman.

"Daesh has mercilessly killed and raped women, children and the elderly. And here you have girls leaving everything to go and fight them. It gives me faith that there is some justice in the fight between good and evil, between light and darkness."

The men who today document the images of war-torn Syria for AFP came from all walks of pre-war life. Delil Souleiman was interested in art and sculpture, Abd Doumany was studying dentistry, Sameer al-Doumy was dreaming of being a doctor. Today, with their colleagues, they produce stunning, heartbreaking photographs of the destruction wreaked upon their home -- images of bloodied children, of piles of rubble that were once homes, of suffering and pain. These images have shown the outside world what war looks like, they have won them awards and recognition. But these aren’t the images they treasure.

"Photographers who document wars in their own countries, be they in Chechnya at the start of the century or in Syria today, often say the same thing. Their best-known  images -- the heartbreak and destruction of their homelands -- are not the ones of which they are the most proud.

"The images they cherish are those of 'ordinary' life -- stolen moments of normality in their shattered lands. These pictures are at once illusion and defiance. Illusion, because they offer a chance to forget the death and killing all around them, even for just a few moments. Defiance, because they offer a chance to show the world that there is joy and happiness, even in a place where hope is as scarce as it is in today’s Syria." 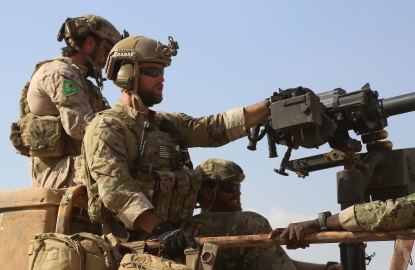 "We were resting, hiding in the shade from the searing heat, when we saw the strangers arrive," writes Delil Souleiman, a photographer in Syria.

"Armed with machine guns and rocket-propelled grenades, the strangers pulled up in pick-up trucks. They stood out right away. Most didn’t look like they came from the region and they spoke English between them, with that distinctive Yankee drawl. A dead giveaway."