A woman covers her face as she stands along the side of a road on the outskirts of the town of Tal Tamr near the Syrian Kurdish town of Ras al-Ain along the border with Turkey in the northeastern Hassakeh province on October 16, 2019. Behind her, plumes of smoke rise from the tire fires set to decrease visibility for Turkish warplanes during the Turkish offensive into Kurd-governed northern Syria. (AFP / Delil Souleiman)

Qamishli -- When my son was born, we named him Avan. It means prosperous and thriving and I hoped the name would reflect the path his life would take. Now it’s a year later and I think -- how could you have given him a name like that? How can anyone have any hope amid all the devastation and destruction in my sad country?

"People had dared dream to that their lands would remain peaceful"

I am a Kurd from northern Syria and I have been photographing this country’s war for years. I have seen death, destruction, despair, suffering. But then I would always come back to the safety of home. The Kurds had self-rule and since they, together with American forces, defeated the Islamic State group’s “caliphate” in the region, people here had dared to dream that their lands would remain peaceful. That’s no small feat for a landless people who have been caught up in power battles between the giants of their region for centuries.

"The past few weeks have turned our world upside down"

There was even a time when I actually thought there was a bit of justice in this world. It was whenever I would photograph women fighting the Islamic State jihadists. Some of these women had been IS slaves and now they were facing and defeating them on the battlefield. It seemed just. But I was wrong and hasty. The past few weeks have turned our world upside down. I no longer feel there is justice in anything. Everything has become absurd and meaningless. The recent days have taught me the truth of this universe -- that it revolves in an indifferent hell. 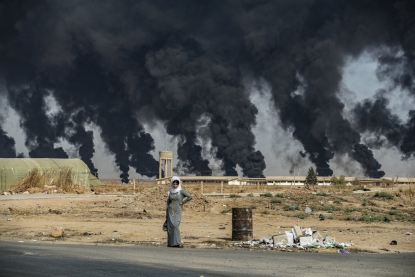 A woman stands along the side of a road on the outskirts of the town of Tal Tamr near the Syrian Kurdish town of Ras al-Ain along the border with Turkey in the northeastern Hassakeh province on October 16, 2019, with the smoke plumes of tire fires billowing in the background to decrease visibility for Turkish warplanes during the continuing deadly cross-border Turkish offensive against Syria's Kurdish forces that has sparked an international outcry. (AFP / Delil Souleiman)

Many Kurds have been in a state of shock ever since US President Donald Trump ordered American troops to withdraw from our area. 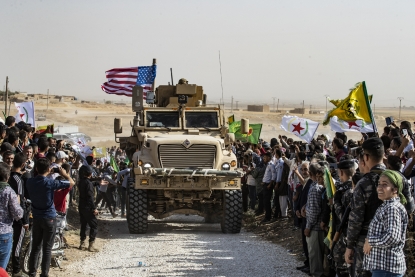 Syrian Kurds gather around a US armoured vehicle during a demonstration against Turkish threats next to a US-led international coalition base on the outskirts of Ras al-Ain town in Syria's Hasakeh province near the Turkish border on October 6, 2019. (AFP / Delil Souleiman)

These troops had not only been the Kurds’ partners in defeating the Islamic State group, they were considered a deterrent for Turkey, which has been fighting a Kurdish rebellion for years and which wanted to send in troops to northern Syria to establish an area free of Kurdish fighters. 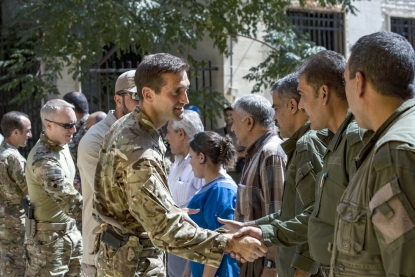 Members of the US-led coalition forces shake hands with local forces from the Tal Abyad military council in the northern Syrian town of Tal Abyad, on September 15, 2019. (AFP / Delil Souleiman)

Following Trump’s decision, Turkey sent in troops and since then, the Kurds don’t have much time to think about anything but defending their areas so their cities will not fall easily. We saw that America did not keep its promise when it evacuated US troops. Kurdish fighters feel they should fight until the bitter end, so they would not live to see the fate that awaits them if they lose the battle against Turkey. They no longer trust anyone but themselves. 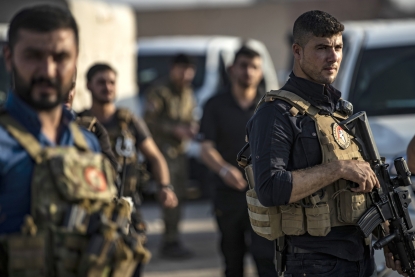 Members of the special forces of the Kurdish-led Syrian Democratic Forces (SDF) are pictured during preparations to join the front against Turkish forces, on October 10, 2019, near the northern Syrian town of Hasakeh. (AFP / Delil Souleiman)

The Kurds gave thousands of our sons to eliminate terrorism. Many Kurds feel Donal Trump betrayed them as has happened throughout their history. 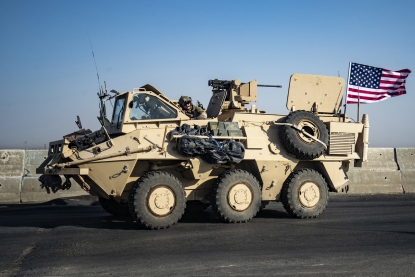 A US military vehicle patrols a road near the town of Tal Baydar in the countryside of Syria's northeastern Hasakeh province on October 12, 2019. (AFP / Delil Souleiman) 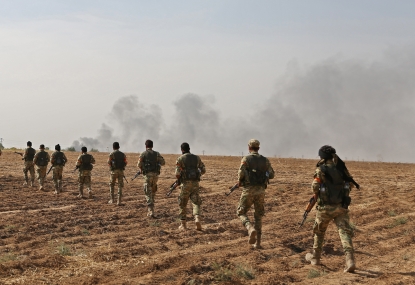 Pro-Turkish Syrian fighters cross the border into Syria as they take part in an offensive against Kurdish-controlled areas in northeastern Syria launched by the Turkish military, on October 11, 2019. (AFP / Nazeer Al-khatib)

I used to photograph battles happening elsewhere and then return home to rest. But now I come from witnessing battles and bombardments to my home, where I find the same fate, the same fatigue, the same absence of security and safety. Fear accompanies us even in bed. 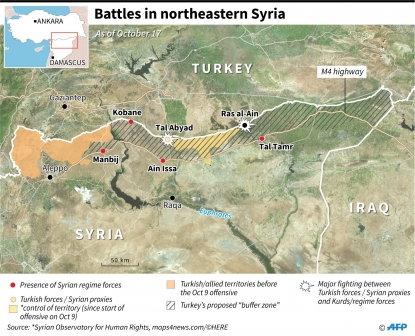 The other day I returned home after covering the fierce battles in Sari Kani (Ras al-Ain). I opened the door and my son was crying because he heard our city being shelled. It was the first time he heard such things since he was born. It terrified him. He could only fall asleep while lying on my chest, as his tears dried on his cheeks. I kept looking at him during the night. He woke up crying, then went back to sleep, terrified.

I wish him happiness. Perhaps fate will be kinder to him than to us and he will know how difficult it was to live through the Turkish attack, which destroyed our dreams of living on our land, freely singing the sad epic songs of our fate. 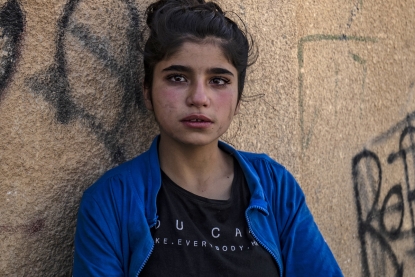 A Syrian girl cries upon her arrival to Hassakeh city after fleeing following Turkish bombardment on Syria's northeastern towns along the Turkish border on October 10, 2019. - (AFP / Delil Souleiman)

I never imagined I would be covering battles like I did, from Kobane to Raqa. And now war has reached my front door, which may be destroyed in the coming days by air strikes or artillery.

"It is difficult to take photos of people dying, their hearts broken because they die knowing their country will be occupied and their headstones will be destroyed"

I honestly never thought I'd feel the world would turn a blind eye to the Kurds in Syria. It is difficult to take photos of people dying, their hearts broken because they die thinking their country will be occupied and their headstones will be destroyed, like it happened to the Kurdish graves in Afrin, a Kurdish-majority area further west in northern Syria that Turkey seized early last year. There won’t even be headstones to bear witness to the Kurdish presence on this land. 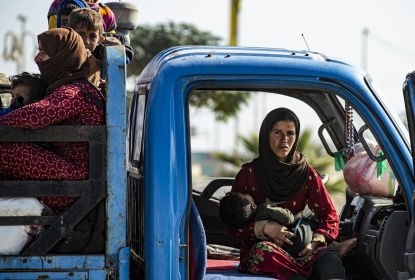 Syrian families fleeing the battle zone between Turkey-led forces and Kurdish fighters from the Syrian Democratic Forces (SDF) in and around the northern flashpoint town of Ras al-Ain on the border with Turkey, arrive along with Syrian Arab and Kurdish civilians in the city of Tal Tamr on the outskirts of Hasakeh on October 15, 2019. (AFP / Delil Souleiman)

Kurds believe they are living in disappointment as they walk to their fate.

I feel history will never forget what happened to us because it keeps repeating itself. It is filled with defeats and disappointments and it feels like winds that carry heavy dust and make it difficult to breathe. 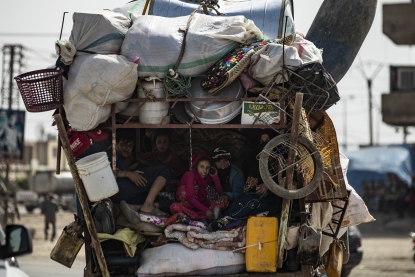 Displaced Syrians sit in the back of a pick up truck as Arab and Kurdish civilians flee amid Turkey's military assault on Kurdish-controlled areas in northeastern Syria, on October 11, 2019 in the town of Tal Tamr in the countryside of Syria's northeastern Hasakeh province. (AFP / Delil Souleiman)

Every time I go somewhere, I tell my wife to take care of herself and our son because I may not come back. She always says, “why are you speaking of death” and starts crying. These painful memories will remain forever. 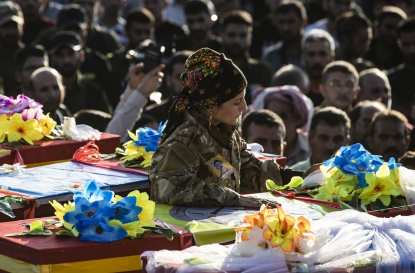 There are always scenes that stand out in your mind when you cover war. And so it is this time around. A woman dancing at the funeral of her brother. She danced and tears streamed down her cheeks. A girl crying over the grave of her beloved. A father and mother burying their son, covering him with dust, knowing that it is the last farewell.

The other day, I saw a mother searching for her son’s body among the wounded and the dead who arrived at the hospital. She was looking at all the faces of the dead, hoping to find her son. Eventually, she just collapsed. She was panting and calling his name. Afterward people told her that her son was dead and that they were unable to find his body, that it had shattered into bits following an air strike on the border town of Ras al-Ain. 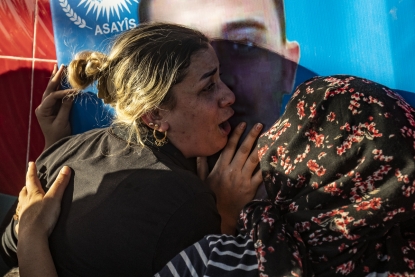 Often as I take photos, my eyes fill with tears. Perhaps because I share the same fate with the people in the viewfinder. 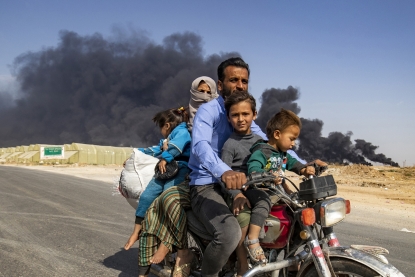 Displaced people, fleeing from the countryside of the Syrian Kurdish town of Ras al-Ain along the border with Turkey, ride a motorcycle together along a road on the outskirts of the nearby town of Tal Tamr on October 16, 2019 as they flee a deadly cross-border Turkish offensive that has sparked an international outcry, with smoke plumes of tire fires billowing in the background to decrease visibility for Turkish warplanes in the area. (AFP / Delil Souleiman)

"Wishes and dreams have dissipated with the winds of dawn."

I write these words as a cold breeze wraps itself around my fingers and an unknown fate awaits this land where I wanted to live all my life with my family.

This blog was written with Menna Zaki in Cairo, Dylan Collins in Nicosia and Yana Dlugy in Paris. 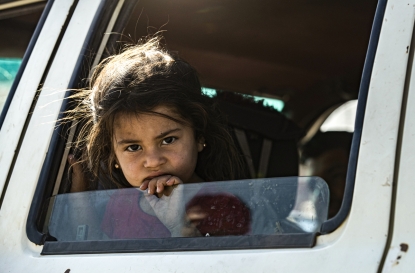 A young Syrian girl fleeing with her family from the northern Syrian flashpoint town of Ras al-Ain along the border with Turkey, peeks out of a car window as Syrian Arabs and Kurds moving away from the battle zone between Turkey-led forces and Kurdish fighters from the Syrian Democratic Forces (SDF), arrive in the city of Tal Tamr on the outskirts of Hasakeh on October 15, 2019. (AFP / Delil Souleiman) 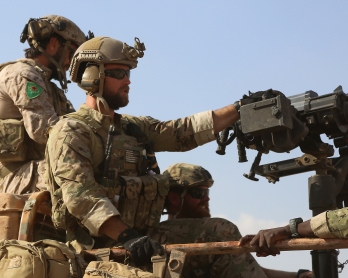 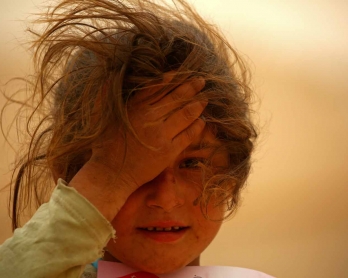 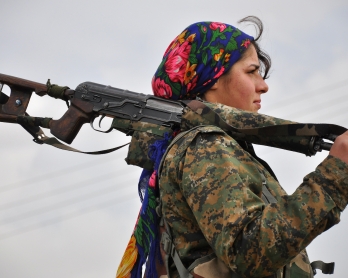 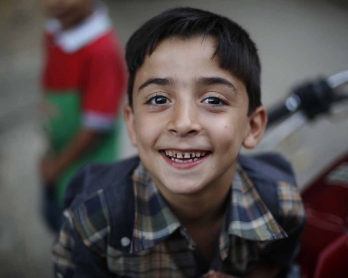