The men who today document the images of war-torn Syria for AFP came from all walks of pre-war life. Delil Souleiman was interested in art and sculpture, Abd Doumany was studying dentistry, Sameer al-Doumy was dreaming of being a doctor. Today, with their colleagues, they produce stunning, heartbreaking photographs of the destruction wreaked upon their home -- images of bloodied children , of piles of rubble that were once homes, of suffering and pain. These images have shown the outside world what war looks like, they have won them awards and recognition. But these aren’t the images they treasure.

Photographers who document wars in their own countries, be they in Chechnya at the start of the century or in Syria today, often say the same thing. Their best-known  images -- the heartbreak and destruction of their homelands -- are not the ones of which they are the most proud.

The images they cherish are those of “ordinary” life -- stolen moments of normality in their shattered lands. These pictures are at once illusion and defiance. Illusion, because they offer a chance to forget the death and killing all around them, even for just a few moments. Defiance, because they offer a chance to show the world that there is joy and happiness, even in a place where hope is as scarce as it is in today’s Syria. 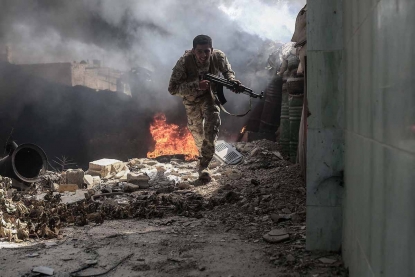 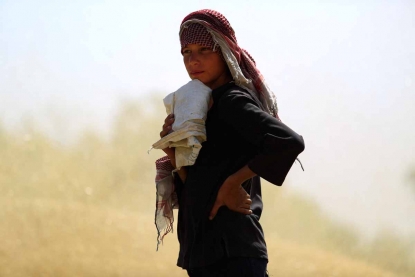 A young Syrian man stands in a wheat field in a rebel-controlled area on the outskirts of Damascus, June, 2016. (AFP / Sameer al-Doumy)

There isn’t only war and destruction, there’s also joy and happiness in the Syrian reality

Qamishly, Syria -- When I photograph daily life, I search for a shimmer of hope and joy, despite the war, destruction, fear and death in Syrian cities. I get excited when I discover hidden angles that are full of joy. In my work, we cover war and bombings and we see a lot of destruction. So we need to photograph daily life, so that people can see that there is another side to the country -- there isn’t only war and destruction, there’s also joy and happiness in the Syrian reality.

I feel so happy when through my lens I see the smile of a child, or a woman sharing a meal with her family at a restaurant, or people enjoying a feast together. On Valentine’s day, I tried to take photos of people celebrating love with flowers. I still have those images in my mind. 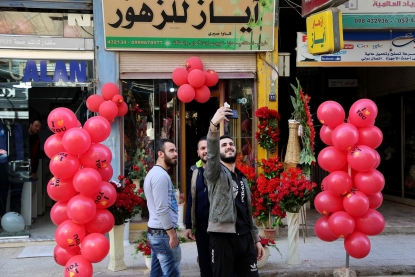 I also make a point of looking for happiness in children. It warms my heart to see children happy in times of war, as they are the ones who have suffered the most from this conflict. It shows that there’s still hope in Syria despite this bloody war. 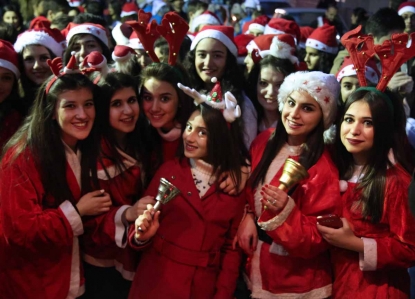 I think that when people see images like these, they get some comfort because it can become repetitive to constantly look at image from war -- death, destruction, killing. It’s only natural that people prefer images that portray some sort of joy.

Each time I take pictures, I come face to face with death. It’s extremely sad and painful when you take photos of dead people’s limbs, of blood pools, of people dying before my eyes and you’re bearing witness to all of it. 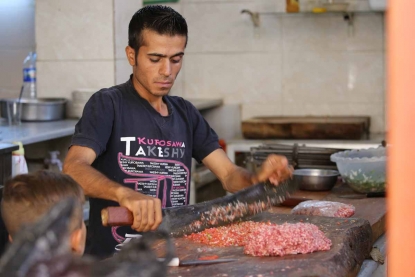 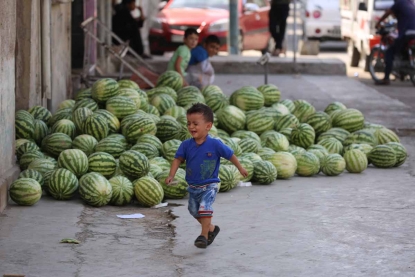 Through my photography I have become a witness to the life and death of so many people. Everything in Syria will fade and change, but these images will remain, documenting the war and destruction. But I hope that my images will also bear witness to the happiness and joy in times of war, a war that will surely end some day... 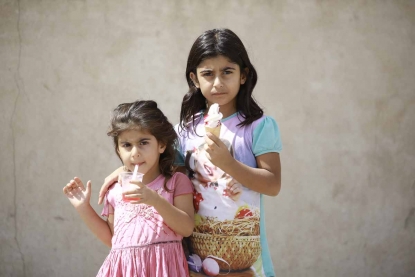 Remedy for a wounded soul

Douma, Syria -- I wish I didn’t have to take pictures of massacres. I wish no massacres were taking place, so that we wouldn’t have to even consider photographing such horrific things.

Seeing people suffer is a huge burden for me. It’s not something that you see once and then forget, it’s something that stays with you for the rest of your life and weighs heavily on your heart. 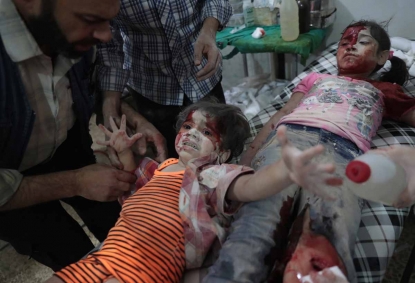 Photographing people when they are enduring the worst suffering of their lives is not a pleasure for me or for them. They are scared, panicked, and worried about their loved ones. All they want to know is whether their relatives are dead or alive. Having someone photograph their fear and misery isn’t exactly a pleasure.

But when I photograph daily life, it’s different. People are welcoming. Maybe because such moments are so rare, they want to share them. 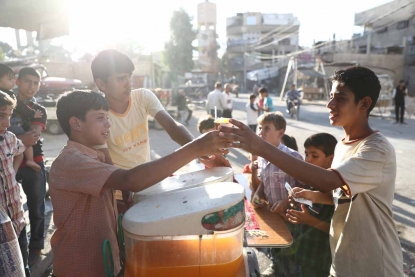 These small “normal” images help me piece together that shattered image of a “normal” life, a life that we no longer know.

To me, photographing “ordinary” things is a remedy for my wounded soul. War has shattered my country. These small “normal” images help me piece together that shattered image of a “normal” life, a life that we no longer know.

I carry my camera with me wherever I go so that I can capture these rare moments. There’s so much beauty in my country, despite the war. The most precious images to me are those of smiling children. 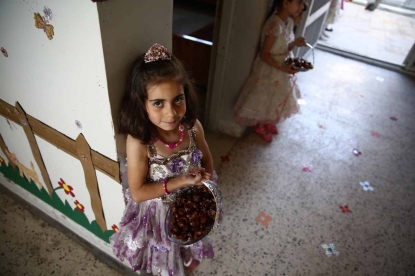 I was a dentistry student before the war and if it ever ends, I would like to continue my studies. But now photography has become a part of me. I can’t imagine myself away from my camera. It’s in my blood. It has awakened something inside of me. I am not the same person I was before the war. Now, I can’t turn a blind eye to suffering, no matter where it happens in the world.

If I could, I would go anywhere where help is needed and offer my help by taking images that tell the truth. 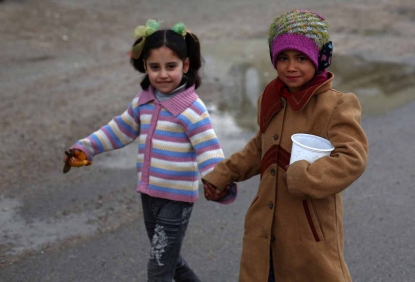 Douma, Syria -- Photographing daily life is an escape. It takes me away from the reality of war. My favorite is taking pictures of children playing and laughing. It helps me forget the horrors of war. 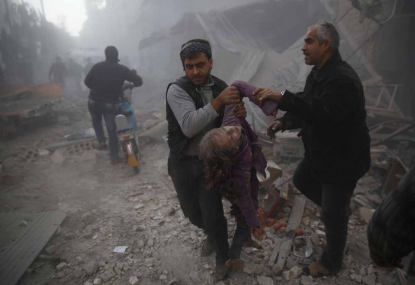 Evacuating the wounded in the town of Hamouria, December, 2015. (AFP / Sameer al-Doumy)

After months of continued bombardments and massacres, and days of dead and wounded children, I never would have imagined that I would see children’s faces with smiles on them. I was so happy when I saw them having fun and playing without a care. 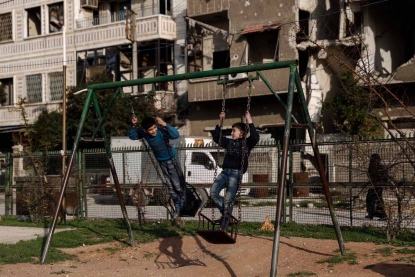 Of course there is a big difference in the way people react to you, depending on the situation. In daily life situations, people react positively to me, they show their happiness. When I am covering destruction and bombing, they react differently, as they are living through a rough moment. I understand and respect their feelings. Daily life photography gets me closer to people and helps me share their happiness and pain.

I think that daily life pictures have more of an effect on people living inside Syria, than pictures of war. Syrians are tired of this war. They live it daily and they are in dire need to take their minds off the hard times they are living through. 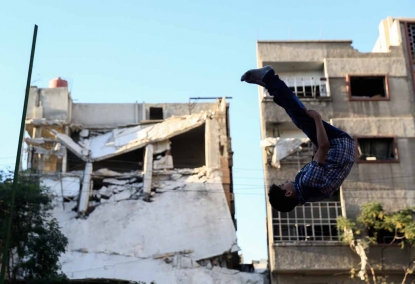 When the war ends, I would like to finish my studies, but I will continue to work in photography, which has become my passion. I think I will focus on people’s lives after the war, how the war affected them psychologically and physically and how they are living with that. I’d like to photograph rebuilding Syria from scratch. 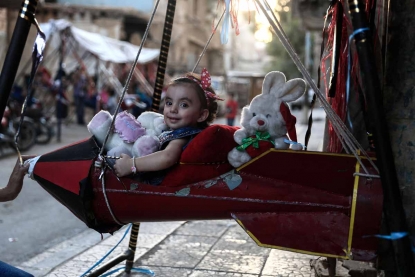 Playing on a swing made from remnants of exploded rockets, Douma, September, 2016. (AFP / Sameer al-Doumy)

This blog was written with Samar Hazboun and Adel al-Salman in Nicosia and Yana Dlugy in Paris. 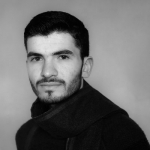 Photographer based in Paris, formerly Syria. Winner of 2016 World Press Photo award for his coverage of the war in Syria.
All posts 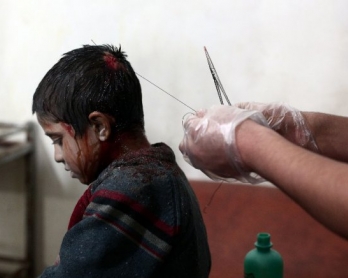 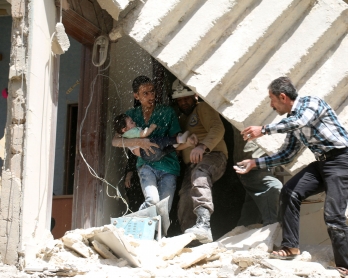 A day of hell in Aleppo