New Delhi -- What's not to like about a festival where you get to throw powder and water on perfect strangers? It's a trip back into childhood, right? Well, not exactly. Not when you're a reporter covering the Holi festival in India.

The truth is, I have been based in New Delhi for Agence France-Presse for the past two years, and I still have not made up my mind about whether I like it or hate it.

When you look at the pictures and videos for the first time, Holi sounds like a fun assignment. It is a joyful mid-March celebration of the coming of spring and the victory of good over evil, a playful festival mostly celebrated in North India.

The festivities last a whole week, and the diversity of the events amazes me. On top of the usual powdery action, Holi allowed me to travel to remote rural villages where I witnessed women beating men with sticks and ripping off their shirts - which is quite a sight in a conservative and patriarchal society! - and a holy man crossing a six-meter tall bonfire and emerging without a single scar, while I burnt my hand filming this feat meters away from a rooftop.

In an already colourful country like India, the celebration of what is also known as the “Festival of Colours” can only be a feast for the camera that would lead to a great photo and video production. Also, the festive atmosphere of the event conjures up visions of merry crowds taking over the streets, like Thailand’s Songkran or Mexico’s Day of the Dead. Think music, mad dancing and controlled chaos; surely it cannot be anything but a fun experience. Yet when I mentioned it to my Indian colleagues during my first year, I realised that very few shared my excitement; most even nurtured a keen hatred for the event. Now, with three Holis under my belt, I am starting to understand why.

… but it is actually not that fun… 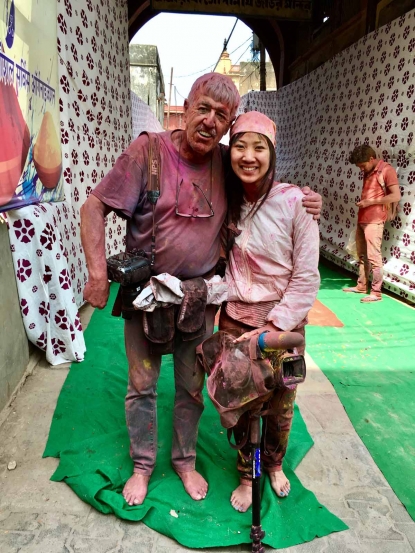 The first challenge is damage-control: how does one cover a powdery mess with a costly camera without having to send it straight to the repair centre after? This issue led me to realise that plastic and tape can be a videographer’s best friends. Over the past two years I have sampled numerous techniques: mummifying my camera with countless layers of plastic film, with holes carved out to free the camera’s buttons and rings; wasting entire rolls of tape to secure it; wrapping it in a waterproof cover; a combination of all of the above. But in the end, there is always a bit of sneaky powder that manages to find its way dangerously close to my expensive sensor.

The second ordeal is, how does one film an event while being inmersed in the middle of blinding powder and deafening music? When the action starts, revellers do not spare reporters and sometimes even target us… Forget about nice sequences and carefully-thought angles: every time I try to get a shot, someone comes in and throws powder, flowers or a whole bucket of coloured water right onto my face. I spend more time coughing, sneezing, dusting and drying my lens than actually filming.

I have also become well-versed in the art of framing other reporters out of my shots: some celebrations take place in narrow temple courtyards in which there can be as many journalists as revellers! Most of the time I can only let the camera roll, blindly adjusting the settings and dodging treacherous attacks and fellow reporters while hoping that someway, somehow, I am managing to capture decent shots.

Unfortunately, being a woman adds an extra bit of unwanted spice to the assignment. Lots of people during Holi absorb generous amounts of bhang lassi, a drink infused with cannabis. I can live with the cheeky hands of children who insist on powdering my face with a little bit too much enthusiasm; but dealing with the groping hands of a crowd of grown men high on drugs or even sober but still looking for trouble is a different story altogether, and I often end up having to punch the offenders to keep them at bay - some as old as 70… 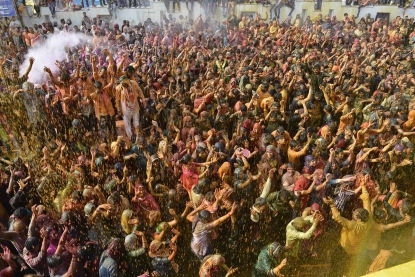 The foreigner factor does play a part, but alas Indian women also find themselves targeted. This sadly takes a lot of the fun away from Holi, and is what spoils it the most for me.

… yet it remains an endearing assignment

However, punches aside, I still enjoy covering Holi. Perhaps the most endearing event of all to me is the widows’ celebration of Holi. Widows in India are usually shunned by society; they can only wear white clothes and are often prohibited from attending celebrations. Holi is the only time of the year during which these barriers are lifted.

Despite having photographers and videographers - me included - crowding around them and sometimes shoving their camera right under their face looking for the best shot, the genuine exhilaration and joy that one can spot on their wrinkled faces on that day is a blissful sight to watch and document.

With these lasting memories in mind, it is usually with mixed feelings that I come back home at the end of the day, leaving a pinkish trail behind me, with the perspective of hours of intense scrubbing and cleaning ahead, my eyes reddened by powders of dubious origin and my hand still hurting after my amateur punches.

One thing I can say for sure is that between Holi and me, it is definitely complicated. Video journalist based in Washington, formerly New Delhi.
All posts 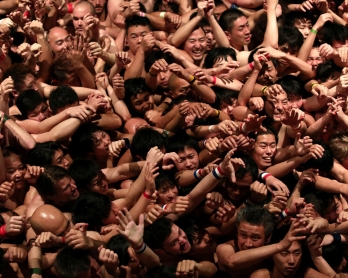 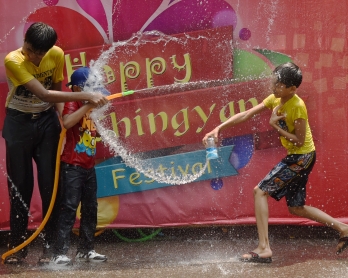 Splashing in a new era in Myanmar