It's pulp galore at the "tomatina" festival in the village of Bunol, near Valencia. (AFP/Biel Alino)

In one photo, a young man was clinging to the bird, trying to rip its head off. In another, a chap held its severed head and a few inches of neck triumphantly out of the water of Lekeitio harbour.

I called the man who had taken the pictures, our AFP photographer in the Basque country.

"The contest is over. They're all standing around the harbour getting drunk."

Rafa patiently talked me through it. Revellers hang the goose -- already dead -- from a cable drawn tight over the water. A competitor hoists himself up on it from out of a rowing boat and tries to rip the bird's head off with his bare hands. Teams of dudes on either side of the harbour yank the cable up and down. If he severs the head before they shake him off, and dives down to fetch it, he can take it home for tea.

It was one of the wackiest folk customs I had come across in Spain, which is saying something. But in my four years covering the place, I got used to the colour and barminess of its countless outdoor games and spectacles. To paraphrase Madness, Spain has a crowd; there's always something happening and it's usually quite loud. 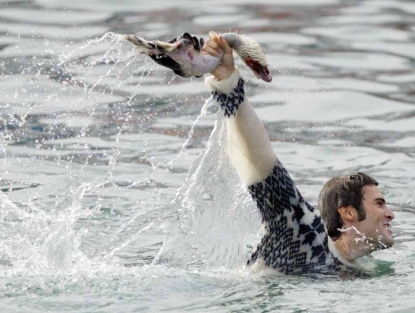 Victory -- a man celebrates ripping the head and neck off a dead goose. (AFP / Rafa Rivas)

In Roses, swimmers plunge into the sea to chase ducks. Across the countryside in July, villagers build bonfires and jump through the flames, walk over hot coals, or rampage through the street dressed as devils and dragons. In Madrid, my kids stared up slack-jawed from their pushchairs as Medieval-style puppets, as high as buildings, paraded through the streets and lined up to dance on the Puerta del Sol.

At Easter, men in pointed green or red hoods with eye slits parade through the streets as effigies of bloody Christs and white-faced Virgins are carried along on people's shoulders. 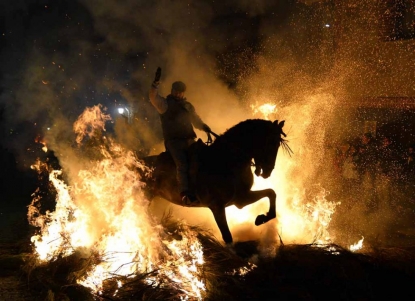 A rider guides his horse through flames during celebrations of the Feast of St. Anthony. (AFP / Gerard Julien)

Other rituals seem more ancient than the Catholic ones. Spain is the home of bullfighting, but it didn't invent killing things in the arena. In the heart of Madrid, the statues of the Roman deities Cibeles and Neptune remind passing motorists of who used to be in charge here.

In Valencia's Fallas festival in March, locals build huge wood and plaster figures and burn them to the din of fireworks. The tourist leaflets say it dates to Medieval times when carpenters would use up their spare wood. I reckon people have been burning sacrifices in springtime for much longer than that. In some Spanish villages, they tie flaming torches to bulls' horns and turn the beasts loose. The tradition is said to date back thousands of years.

I covered the "Tomatina" mass tomato-pelting fight in Bunol. Alright: that one, it seems, really was a 20th-century invention. Waiting in my anorak for battle to commence, I was delighted to see on the sidelines a tradition I had thought unique to my native northern England: a greasy pole. A stake, several yards high and smeared with fat, stood out in the crowd. A young Japanese man in a superhero outfit was trying to scramble up to grab a great ham tied to the top as a prize. He slithered hopelessly back down to a great roar from his fellow revellers.

But as hardship hit in the economic crisis, outdoor gatherings took on a darker function. I spent a lot of nights at Puerta del Sol, Madrid’s most central square known simply as Sol. That square and the streets leading from it to the parliament were the stage for Spain's biggest spectacle of all: the anti-austerity demonstrations, in which ordinary Spaniards of all ages played the lead role.

The revellers at various festivals had seemed so easygoing to me, but those nights they went wild, yelling in fury at pay cuts and job cuts and corruption.

Once I watched fascinated as a mild-looking bald man in spectacles bellowed in the visored faces of riot cops in the Carrera de San Jeronimo. It was two o'clock in the morning and neither he nor the police showed any signs of leaving, so I wasn't going home either.

Another night, near parliament, the police drew their truncheons and chased the crowd, reporters, hooded youths and all, right down the Paseo del Prado. Young women were lashed on the legs with batons as they were running away. One hot summer evening a crowd of thousands lined the Gran Via after midnight to greet a legion of coal miners arriving in the city on foot in their hard hats. They had walked hundreds of miles from the north in protest at pit closures. Like those of their British counterparts three decades ago, their jobs were doomed. They had nothing to do but walk. Thousands of Madrileños came out to welcome them as if they were a trophy-winning football team. They reached Sol in the middle of the night and were on the march again the next morning, all the way up to the Bernabeu soccer stadium and beyond. I got sunstroke walking along with them. I rested on the ground for a few minutes before a riot broke out.

On Sunday mornings I would push a buggy sleepily round the Retiro park and we would stop to watch the puppet shows, where the same social drama played out on a miniature stage. Embodied by floppy puppets, hardworking folk would chase and beat the devils and rich villains who cheated and stolen from them. The show continued on weekdays in the street outside our AFP office, just across the road from the high court. Angry crowds would gather there as bankers and officials accused of fraud and corruption in the crisis turned up to go before the judge.

"Thief! Bastard!" they yelled as one suspect got out of his car: Rodrigo Rato, formerly deputy prime minister and head of the IMF.

Elsewhere, on the doorsteps of apartments in the suburbs, groups of protesters would sit to wait for the police and bailiffs when they came to evict ruined families. "Sons of bitches!" yelled the crowd. It was like a pantomime. But in the crisis most people couldn't afford to go to the theatre. Or the football. Or the cinema. For them, the drama, the tragedy, the score-settling took place in the street. 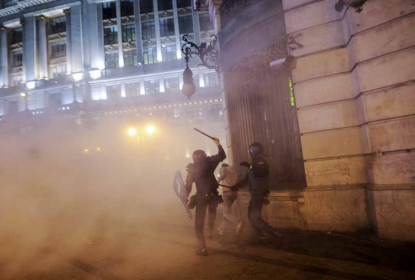 A friend showed up at my door wearing a wrist support. A policeman had twisted his arms behind his back to handcuff him for refusing to show his identity card at a demonstration. The hospital had only given him one support. He had to switch it from one wrist to the other while he waited for his day in court. "Bueno," he said, with a shrug. "Ah well."

It was hard to tell whether anyone was listening to the protesters. The spending cuts and labour reforms went through. When the demonstrators had been chased away and the traffic flowed back round the statue of Neptune, nothing of the spectacle remained.

Demonstrations during a "Stop Evictions" protest in 2014. (AFP/Cesar Manso)

From 2013, the economic growth figures started to improve. The protests tailed off. More than a fifth of the workforce were still unemployed but taxi drivers told me people were starting to go out more on Thursday nights, kicking off the weekend early -- a key indicator of confidence, as we like to write in our economics copy. The queues at the cinema seemed to get longer.

As a foreign correspondent you're in the middle of the action but you know you're just a spectator. An outsider, you're never quite sure you understand what it all means. Yet maybe the spectacle isn't the point -- it's what's going on under the surface. Something had changed. The conservative ruling party claimed victory against "la crisis", but its ratings declined as new protest parties grew.

The spectacles I saw in my four years in Spain changed me. Living for the first time in the Mediterranean sun, I saw life lived where it should be -- outdoors, singing and yelling. I started to feel -- or so I flattered myself -- a little bit Mediterranean myself. A tiny bit warmer, less selfish, more outgoing. I hope I'll take it with me when I move on to Latin America this month.

Revelers happily throw tomatoes during the "tomatina" festival in the village of Bunol, near Valencia. (AFP/Jose Jordan)

Before leaving I had a message from Pedro Armestre, another photographer working with AFP. He was always snapping away at the heart of the action, at bull runs, demonstrations and other boisterous gatherings. He summed up how I felt about my four years in Spain. "The most important things you don't see," he wrote. "You feel them."

RolandLloyd Parry is an AFP journalist wrapping up a four-year posting in Madrid. Hewill start work in Montevideo in November. Follow him on Twitter @rolanddlp 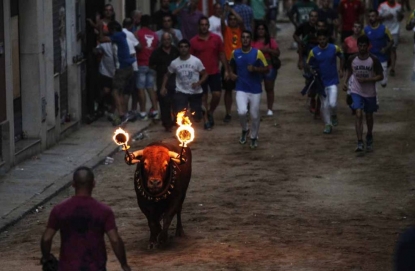 A bull charges through the streets of Meliana, near Valencia. (AFP / Jose Jordan) 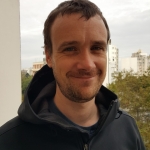 AFP climate change fact check journalist, based in Paris. Previously in Montevideo, Madrid and Washington
All posts
Next post

Becoming an unwitting part of the story