MURSITPINAR, Turkey, October 16, 2014 - In the days before the conflict it was known to local gossips as the "love hill", a place where courting couples would come to chat and even flirt, away from prying eyes. But when Kobane became the focus of global attention this small bump of land by the Turkish border crossing of Mursitpinar became a magnet for the world's media.

The hill offered a grandstand, if sometimes surreal, view of the bitter fighting between the Islamic State group (IS) militants and Kurdish fighters for Syrian town Kobane which is just a handful of kilometres away from the border. Members of the press, joined by crowds of Kurdish spectators from all around Turkey, as well as Syrian Kurdish refugees, clustered on this hill to observe the clashes -- at relative safety. Some clutched binoculars for a better view. The spectators stood by, watching the developments unfold from morning until nightfall. But the feeling of safety could sometimes be illusory. The shells occasionally landed on Turkish soil and a few of them at a distance of less than 200 metres. I heard stories from colleagues who witnessed first hand shelling during a live broadcast. A few days later in the morning, I also witnessed the shelling from a missile 150 metres away from where I was watching the developments in Kobane. I heard the Turkish army responding to the shells -- a routine procedure the military applied under its rules of engagement. Only after shells fell on Turkish soil, did many journalists start wearing bullet-proof vests and helmets.

The hill was also a gathering point for Turkish Kurds to demonstrate against Turkish security forces for not allowing them to cross over the border to join the fighting in solidarity. Clashes between stone-throwing protesters and the army firing volleys of tear gas often resembled a pitched-battle in themselves. The frequent clashes between the Turkish Kurds and security forces illustrated a profound mistrust between the two sides, while generating questions about Turkey's peace process with its own Kurdish community. The two sides were like enemies. The more stones the protesting Kurds -- many of them sympathisers of the outlawed Kurdistan Workers' Party (PKK) -- threw, the more tear gas they inhaled. 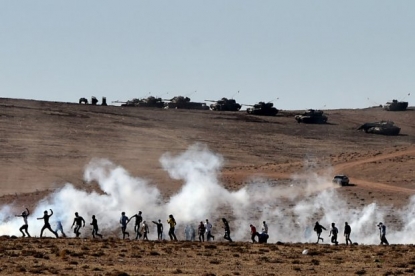 After the conflict both in Kobane and the protests on the Turkish side escalated, the military warned the media through loudspeakers to evacuate the hill and we also felt the effects of the tear gas. But this had, unfortunately, become a kind of ordinary experience for us because of our coverage of the Gezi Park protests last year.

The media were pushed back to a few hundred metres away from the main lookout point but we continued to be surrounded by Kurdish spectators who staged rallies or protests on roadsides or open fields overlooking Kobane. In the end we had to dodge another wave of tear gas fired from army trucks. I was going back and forth to a local gas station to escape the tear gas. 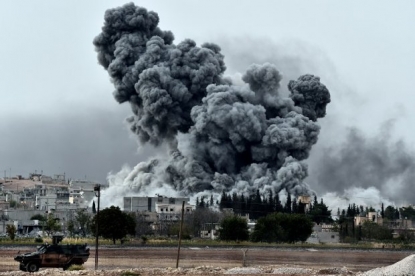 Smoke rises after a strike on Kobane, seen from the Turkish-Syrian border on October 12, 2014 (AFP Photo / Aris Messinis)

To get a better view of the clashes, I found a way with a colleague to monitor what was happening in Kobane from a nearby stone house in a border village evacuated by the army out of security concerns. After convincing members of the family through my translator, I climbed the roof of the house where the traces of bullets fired from Kobane were visible.

"They are fighting but we are bearing the brunt," said 40-year-old Faik Cankaya, owner of the house, pointing to a panel hit by a bullet from the other side. "Bullets have been flying over our heads for days. We are alive by chance," he said. After the evacuation of border villages, I saw crowds of people gathering on top of nearby houses or other hills a little bit further but with a clear view, using binoculars or talking with telephones with their relatives who were fighting on the other side of the border. Mingled with the press, some brought their own carpets to sit on, some munched on sunflower seeds, some found a shelter under the shadow of a tree to avoid high temperatures. But they all watched the fighting from morning to night. With the help of my translator, I witnessed some quarrels between the elderly Kurds shouting at the young they should have fought in Kobane, instead of being a spectator here. Some of them prayed with their face directed to Kobane. 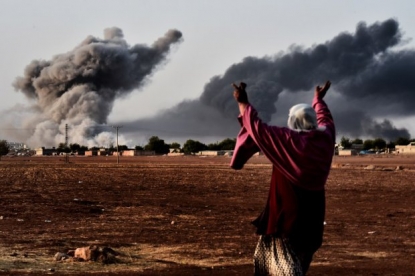 As people are very sensitive and frustrated with the media coverage of the battle, we were often advised to be careful with the language we used. Some Kurdish protesters attacked vehicles of media whom they claimed had even praised IS advance.

Because of strict security controls at checkpoints on the road to the border, I had initially kept my yellow official Turkish press card hanging around my neck. To cover a round-the-clock vigil by Kurdish protesters in a border village before the evacuation, I approached people for an interview but was immediately surrounded by a fervent crowd who noted my card from the "prime ministry." They accused Turkey of helping with IS and even watched over what I wrote in my notebook, and what I did not. I also saw large crowds on roadsides wearing masks. I discovered they were waiting to block the road and stop ambulances carrying "alleged injured IS" militants in order to beat them. The war in Kobane has had direct ramifications in Turkey and as IS advanced from the east, hundreds were seen walking through open fields to the border gate after the main pro-Kurdish HDP party called on Kurds to take to streets. There were no casualties on that night but the next morning was like a battle scene with poles dismantled, tires burnt, damages in government buildings. All shops were closed -- except for few a bakeries.

Turkey has so far received 200,000 refugees -- equal to the population of the main border town of Suruc. A local said: "We are like refugees in our homeland." As we drove through the town to travel to the border, refugees could be seen everywhere. It was not hard to distinguish Syrian refugee men with their traditional dresses or a refugee child who carelessly jumped into the road from a makeshift camp with his bare feet. Syrian Kurdish refugees outside a camp in the town of Suruc in Sanliurfa province on October 11, 2014

The war at Turkey's frontier with Syria united Kurds on both sides of the border, which is on the former Ottoman and long disused railway line. For many Kurds, the border redrawn after the World War I is an artificial one and there are no borders in their hearts, nor minds. They have relatives, kinsmen. I came across a famous Kurdish folk singer on a hill overlooking Kobane. Diyar Dersim, who is from Turkey's southeast and who lives in Germany. He said he turned up at the border region in a show of solidarity for the "Kurdis h revolution." He said: "Kobane has stunning meaning for the Rojava revolution," he said, using the name for the Kurdish part of Syria. Kobane is a breaking point."

After spending whole day in the border town, I stayed in the city of Sanliurfa, which has a population of half a million. It was a surreal contrast. The protests of Kurds mixed with loud music nights for local and international tourists who were still visiting the city. Many hotels were all packed in agreement with tour organisations, as Sanliurfa hosts an array of historic monuments. After being jolted by ambulance sirens, airstrikes, shelling and gunfire the whole day, loud folk music at the hotel would keep me awake at night.

Fulya Ozerkan is an AFP reporter based in Ankara. 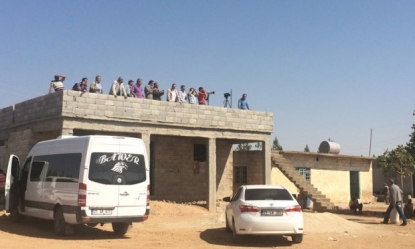