Shuruq (R), a nine-year old Syrian girl without legs, plays on a swing with another child in a park in the northern Syrian city of Aleppo on November 3, 2014 (AFP Photo / Baraa Al-Halabi)

ALEPPO, Syria, November 10 – I came across Shuruq by chance one day, while walking in a playground in Aleppo. The nine-year-old little girl was playing with her brother, two sisters and mother. Since she has no legs, her big brother was pushing her on the swing.

Aleppo was once Syria's economic capital. The town has been ravaged by more than two years of merciless fighting between rebels and Syrian government forces. Daily bombings by forces loyal to President Bashar al-Assad have left thousands of people dead and caused mass destruction. Shuruq's mother says she lost her legs when a bomb destroyed her home. 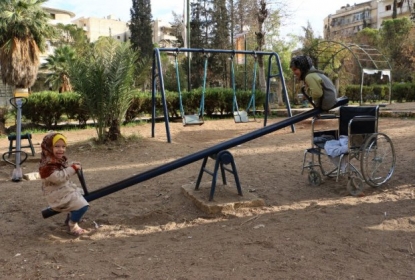 Like often in times of war, though, things are not always what they seem. Someone else in the neighbourhood told me another version of Shuruq's story, saying she suffered from a birth defect. Her father was said to have fled towards a regime-held area, and to be wanted by rebels. Since then her mother has had to raise her four children alone, with no source of income, making her dependent on handouts. Shuruq helps feed the family by selling cookies on the street.

Shuruq is a smart, friendly little girl, full of energy. She learned to walk on her hands and moves around nimbly. I didn't speak to her much -- she was far more interested in playing than being photographed. 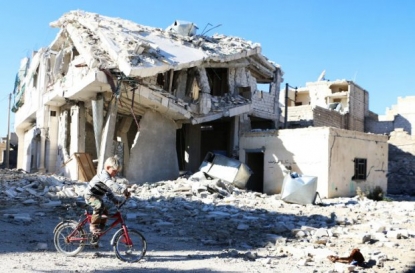 A boy rides his bike past a destroyed building in Aleppo on November 5, 2014 (AFP Photo / Baraa Al-Halabi)

Here in Aleppo, there is a school that has decided to take in all the handicapped children and help them lead a more or less normal life -- whether or not their handicap is linked to the war. Life here is very tough for everyone. Even more so for these mutilated children you often see selling sweets on the street to survive.

The park where I took these pictures lies at the site of a former graveyard. An association turned it into a playground so the children of Aleppo had somewhere to be. Like any playground in the world, it fills with children when the sun shines, and sits deserted when it rains -- and, for this is Syria, when government planes appear in the sky.

Baraa Al-Halabi is a freelance contributor to AFP based in Aleppo. 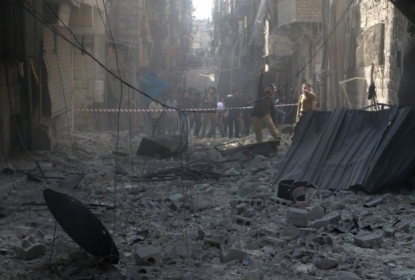 A street of Aleppo is filled with debris following an attack by government forces on October 31, 2014 (AFP Photo / Baraa Al-Halabi)