Marco Longari, AFP's head of photography in Africa, has lived in Johannesburg since 2014. Marco started out as a photographer in his native Rome. He then went to Kosovo as a freelancer in 1998, an assignment that resulted in his first book "Neighbours at War". Two years later, his story with Africa began, when he became AFP's stringer in Rwanda. He went on to become the agency's chief photographer in Nairobi and Jerusalem. His work during the Arab Spring prompted Time magazine to name him Best Photographer on the Wires  in 2012.

When the COVID-19 lockdown began in South Africa on March 27, he decided to tell the story in a different way. Instead of using a digital camera with which he usually works, he decided to go back in time. He bought a LinhofTechnika III, a large format camera that first came on the market in 1946. It required him to move slower, which somehow fit right in with the quietness of the city.

Marco could only find two boxes of black and white film. The images he produced captured the spirit of the city, devoid of its habitual hustle and bustle... it was if the city had lost its color. A narrative to read and hear.

"It was a crazy day, a culmination of various elements that have been brewing and bubbling for weeks during the student protests against raising university fees in South Africa," writes Marco Longari, AFP's chief photographer for Africa.

"The university wanted to remain open, the student protesters wanted to shut it down, emotions were running high and there was a heavy police presence.

"It was a recipe for disaster and that is exactly what happened."

"When I got to Gabon to cover the recent election, I found myself the only photographer from a major global news organization in the country," writes Marco Longari, chief photographer for Africa.

"People ask -- why bother covering yet another election and unrest in yet another African country? I tell them - how can we not? This is where Africa’s modern history is unfolding. If we are going to tell the story of Africa, of the narratives that are taking place on the continent, then we cannot back off from coming to places like these." AFP's chief Africa photographer Marco Longari spent two weeks in the Central African Republic covering the run-up and the voting on on a constitutional referendum in the impoverished country that has been torn by violence since 2013.

"It’s complicated coverage. You can feel something is brewing and things are not settled. There is constant stress, you always have to watch out, you can never relax. And on Sunday, we saw why." 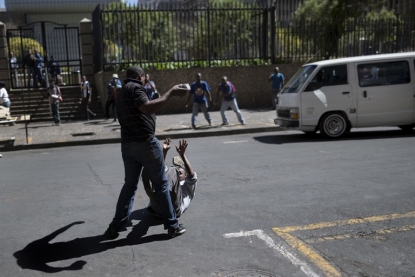 A South African taxi driver hurls paving stones at the head of a foreigner, during xenophobic clashes in Johannesburg on April 15, 2015. AFP photographer Marco Longari explains how he came to witness this brief but spectacular explosion of hatred, in a country where outbreaks of xenophobic violence are a recurring problem.