Civilians diver for cover as fire is directed at the Baya Dombia school. (AFP / Marco Longari)

BANGUI, December 17, 2015 – I’ve been in CAR for about two weeks. It’s complicated coverage. You can feel something is brewing and things are not settled. There is constant stress, you always have to watch out, you can never relax. And on Sunday, we saw why.

CAR is a complicated situation to begin with.

The country has been roiled by unrest since March 2013, when rebels from the mainly Muslim Seleka force ousted veteran Christian leader Francois Bozize.

Since then, there’s been spiraling tit-for-tat violence between Muslim and Christian groups.

It’s a low intensity conflict at the moment. There is no frontline, there is no active shooting every day. But you know that at every corner of the street there are armed people who can cause trouble. There are international armed forces everywhere. Around 11,000 of them are in the country, where much of territory is controlled by either rebels or bandits. 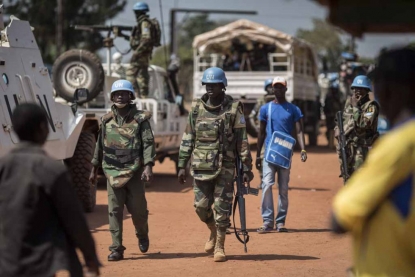 The Muslims are the minority and in the capital Bangui, they live in the PK5 neighborhood. That was the place of the shootout on Sunday, which I and the other members of the AFP team got caught up in.

It was voting day on a referendum on whether to adopt a new constitution. The constitution is aimed at ending the years of violence, which has left around 5,000 people dead and has forced 10 percent of the 4.8-million-strong population to flee. 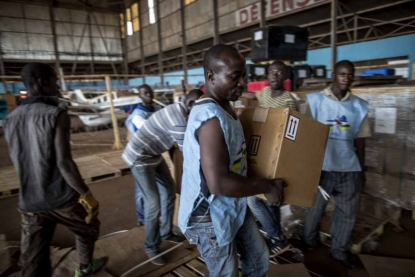 The majority of Muslims living in PK5 are in favor of this, but a minority is opposed to it.

Then people who wanted to vote gathered, demanding that they be allowed to cast their ballots. So there was tension brewing between the two groups since morning. 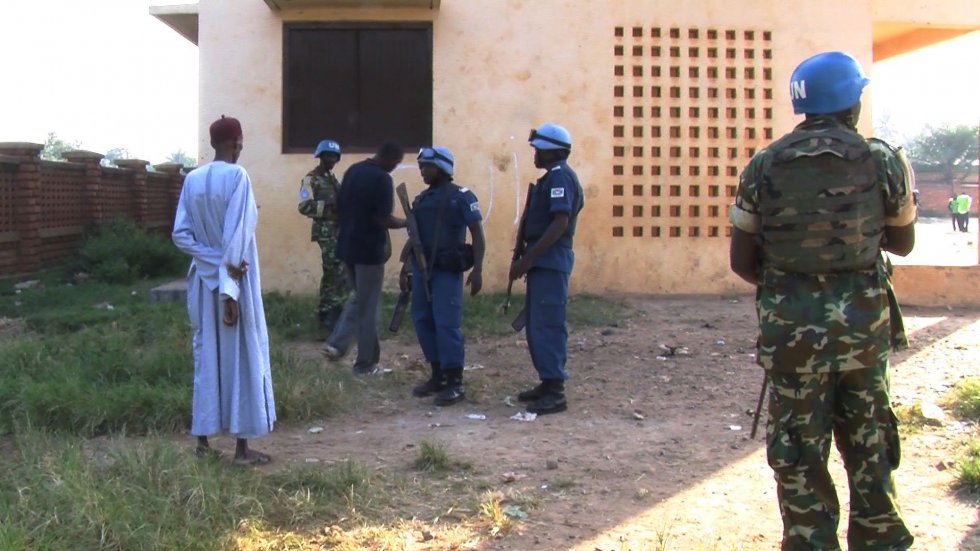 So people gathered outside the school waiting for the voting materials to return. At that point, some of the armed forces of Central Africa arrived. Along with them were some armed militants, the civilian defense for this Muslim neighborhood. Civilian guys with Kalashnikovs and hand grenades. They took positions outside the school in a show of force. That gives you an idea of the tension. There was tension building up for hours. In the meantime, the voting was moved to another school nearby, the decrepit Baya Dombia school. The material was delivered, people stood in line, they began to cast ballots. There was a UN contingent, everything was going according to plan. 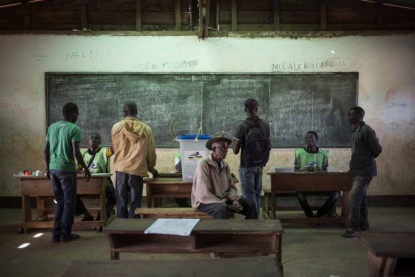 Voters cast their ballots at a polling station in Bangui. (AFP / Marco Longari)

All of the sudden, as the people lined up to vote, shots were fired. The attackers started with fire from light automatic weapons and some people started to scramble for safety. But there was no mass panic. Gunfire is a regular thing in CAR, so there was no immediate panic.

At this point, they began to fire RPGs, toward the school, toward the crowd. The bullets were whistling around past the people. They were really targeting the people at the school.

One of the RPGs hit a palm tree that was just outside the fence of the school, 10-15 meters away from the crowd. The impact cut the palm in two and it just split. The funny thing is that it split in two in slow motion. So you have the two sides of this palm coming down in slow motion amid gunfire.

It was then that people realized the severity of that was happening and they started to run away and scream and the panic began. A Senegalese soldier from the UN contingent runs for cover amid gunfire at the Baya Dombia school. (AFP / Marco Longari)

At that point, the UN soldiers present at the school returned fire and the Senegalese soldiers that were there, they jumped into the crowd and brought the crowd to safety, away from the open space of the courtyard. Another part of the Senegalese troops took up positions and opened fire in the direction of the assailants. A UN soldier takes cover with civilians amid the gunfire at the school. (AFP / Marco Longari)

They returned fire for a sustained three-four minutes. And then some of the UN armored vehicles moved in the direction of where the fire was coming from and possibly chased the assailants away and the attack stopped.

At some point amid the shooting, some young Muslim men rose up from cover, waved their fists in the air and shouted: “We’re going to vote!” It speaks volumes about how sick and tired people are of the violence.

"We have suffered too much. Those who are shooting are criminals who want chaos, but we can't take it any more. We are Central Africans too, and we want peace!" Mahamat Youssouf, a tradesman, told my AFP colleague in another part of the capital.

The gunfire shut down the voting at the school for the day, but voters returned the next day to cast their ballots. They lined up to vote. I have to say, it was a really close call. If one of the RPGs had landed in the crowd, there would have been some serious casualties. As it is, no one ended up getting hurt at the school, but five people died in other clashes in PK5 that day.

People were lingering around, not realizing what was happening, so the UN soldiers did very well to get the crowd to the safety of cover. When the fire started I was outside the fence of the school, that’s where I took the pictures of people taking cover. 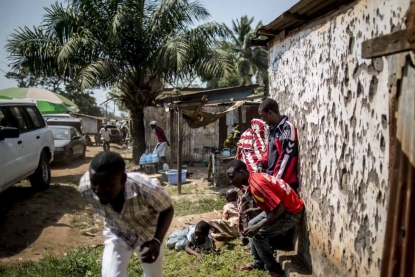 And then I went back inside the school to look for my colleagues. When the attack began to be more sustained I thought the best place to take cover was the stairwell of the school. Then I went across the courtyard next to the soldiers returning fire, trying to take some pictures.

I wasn’t so concerned for my safety, but for the people around me, because they didn’t know what to do.

I’m happy to leave after two weeks, though I’ll certainly be back. There is an undertone of unsafety around in the city. Some parts of the population are openly hostile to journalists, in some areas, it’s extremely complicated to work. Not so much in the Muslim district. They’re welcoming there. They’re an enclave, so they want people telling their story. You can feel something is brewing and that things are not settled. Plus there is a curfew every night, so you have to have a high level of attention to what you’re doing.

I’ve been to quite a few conflicts -- Gaza, Libya, Syria, Georgia, Kosovo, the major conflicts in Africa -– and this certainly wasn’t the worst situation that I’ve been in, but I would say that the attack, on a scale of one to 10, was an eight. It was a very scary situation. The fire was directed at us directly and if one of those RPGs would have landed in the crowd, there would have been serious casualties.

It was completely criminal of these people to fire in there.

Covering the obscure side of the awakening force