A general view shows the skyline and Hong Kong's Victoria harbour, as seen from the International Commerce Centre (ICC) on May 25, 2018. (AFP / Anthony Wallace)

Hong Kong -- When I started as AFP's bureau chief in Hong Kong in 2014, huge pro-democracy rallies known as the Umbrella Movement were erupting onto the streets, earning their name from the rag-tag assortment of umbrellas used by protesters to protect against police tear gas and pepper spray.

Although there were flare-ups of violence, the protests were largely peaceful and the city was filled with hope for change. 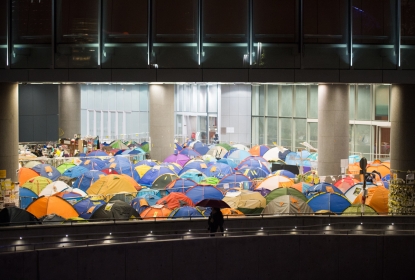 A woman carrying an umbrella is seen at the pro-democracy movement's main protest site in the Admiralty district of Hong Kong on December 2, 2014. (AFP / Johannes Eisele)

This brave optimism, which pitted the economically powerful but small former British colony against the might of mainland China, won Hong Kong’s people worldwide admiration.

For many like me, an outsider living here, it deepened my affection for the semi-autonomous territory where I had already been based for two years.

Hong Kong had quickly won me over with its energy, its pride in its idiosyncratic identity and the juxtaposition of its Bladerunner urban skyline with its trail-laced jungles and outlying islands. 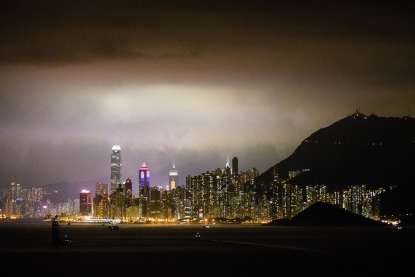 This general view taken late on February 25, 2018 shows ships sailing in the waters off Hong Kong and the city's skyline. (AFP / Anthony Wallace) 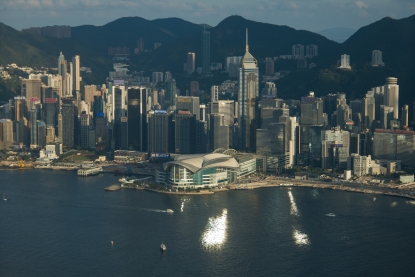 A general view shows commercial buildings in Hong Kong, as seen from the International Commerce Centre (ICC) on May 25, 2018. (AFP / Anthony Wallace)

I made efforts to learn its famously difficult language, Cantonese, and although I still struggle to vocalise an unmangled sentence, I love its sing-song sound, plays on words and inventively filthy expletives.

But it is only in the past few months that I've become aware of the popular idiom translated as "Kill the Chicken to Scare the Monkey”. 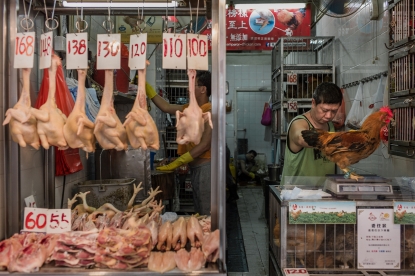 The refrain is shorthand for using heavy-handed tactics to make an example of someone in a bid to deter others.

More commonly used to describe the Chinese Communist Party's repression on the mainland, people are now increasingly using it to describe to me the situation in Hong Kong.

As I prepare to leave the city, 2014’s hopes that Hong Kongers would win a greater say in how they are governed are fast giving way to fears for their future. Political freedoms, which were guaranteed for 50 years when Britain handed the city back to China in 1997, are now rapidly disappearing.

I am among those journalists who have covered the ongoing crackdown against Hong Kong's tiny pro-independence movement, which emerged after the 2014 rallies failed to win political reform.

I’ve reported on how elected pro-independence and pro-democracy lawmakers have been ousted from the legislature, how leading activists have been prosecuted and jailed, and how universities have warned their students against any talk of separatism. 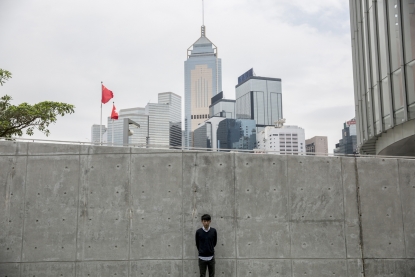 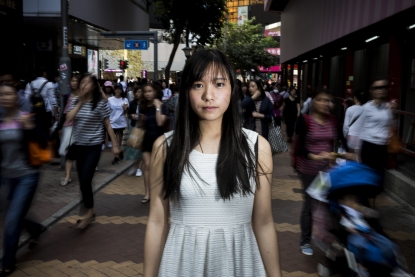 My final months here have been marked by a barrage of further blows against freedom of speech, with many journalists now wondering how new and shifting "red lines” restricting political debate will impact our ability to report.

The most striking of these has been the blacklisting of Financial Times journalist Victor Mallet after he hosted a talk by an independence activist at the Foreign Correspondents’ Club.

After the club refused to cancel the event as requested by Beijing's foreign ministry, it found itself in the eye of a political storm, with Hong Kong officials later refusing to renew Mallet’s work visa and denying him entry even as a tourist, effectively banishing him. 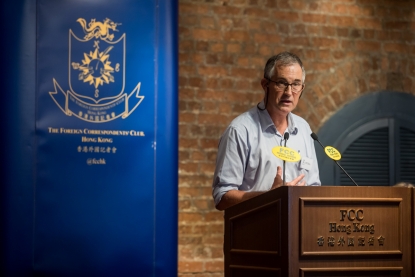 In this photo taken on August 14, 2018, Victor Mallet, a Financial Times journalist and vice president of the Foreign Correspondents' Club (FCC) speaks during a luncheon at the FCC in Hong Kong, during which Andy Chan, founder of the Hong Kong National Party, gave a talk. (Pool/AFP/ Paul Yeung)

The saga prompted journalists to question whether their own reporting would be deemed by Beijing to be providing a platform for unlawful views and are mindful that if they cross the new line, they could also have their visas revoked, as is standard practice on the mainland.

I received numerous text messages from friends and contacts asking whether my visa was safe after Mallet was targeted.

The subject of whose visa was up next and whether that person was likely to be allowed to stay became a major talking point among foreign reporters.

Local media were also in shock. One Hong Kong television journalist who covers the city’s politics told me she was worried about how much longer she would be given a free rein, particularly as Chinese investors pile in to the media sector here. 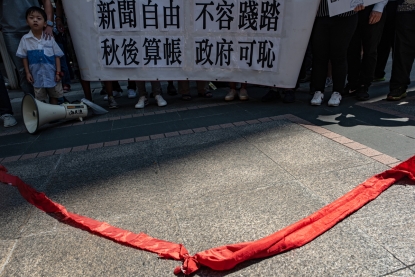 A banner that reads freedom of the press, not allowed to be trampled and shame on the governments vindictive move is seen above a symbolic 'political red line' during a protest after Hong Kong immigration authorities declined a visa renewal for senior Financial Times journalist Victor Mallet, outside the immigration department building in Hong Kong on October 6, 2018. (AFP / Philip Fong)

But that same reporter was determined to continue, and the vociferous local press pack that grills officials daily certainly shows no signs yet of letting up.

The punishment of Mallet has unified foreign and local press in a kind of siege mentality.

However, paranoia has also set in: a leading Hong Kong arts centre recently cancelled talks by dissident Chinese author Ma Jian before reinstating them at the eleventh hour after an embarrassing backlash.

The about-turn highlighted the minefield to be navigated by those willing or forced to toe the new boundaries around Hong Kong’s freedoms.

That kind of self-censorship is inevitable and likely to become more common in a climate where people are afraid of and unsure about what might happen next, and worry about reprisals affecting their careers, their livelihoods and their families.

It’s all a far cry from the heady days of 2014 when I walked through the sprawling protest camp near AFP’s office and experienced the buzz of witnessing and reporting on such an exuberant expression of hope and belief by tens of thousands of people. 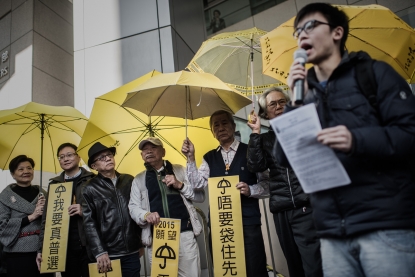 Supporters of the pro-democracy movement hold yellow umbrellas as one of the students (R) summoned by the police addresses the media outside the Wanchai police station in Hong Kong on January 16, 2015. (AFP / Philippe Lopez)

The students leading the rallies had taken inspiration from Taiwan's Sunflower Movement earlier that year, where young protesters occupied parliament over government trade deals with China.

I've also reported on Taiwan since 2014 and have seen some of those protest figures go on to become lawmakers as the island strives to define itself as a beacon of freedom in Asia.

Taiwan has a full-blown democracy and behaves to all intents and purposes as a sovereign country, but China claims it is part of mainland territory and has successfully marginalised it on the world stage. 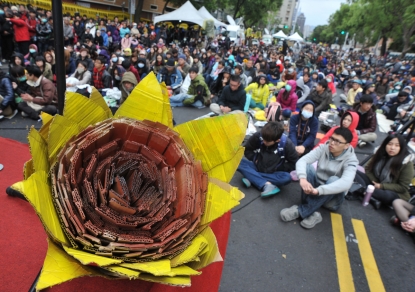 A paper sunflower is displayed as activists rally outside parliament in support of student protesters occupying the building in Taipei on March 21, 2014. (AFP / Mandy Cheng)

In the face of that pressure, Taiwan is trying to push its democratic credentials to win friends globally.

Hong Kong is going in the other direction. 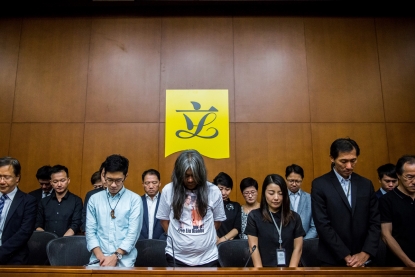 Its freedoms have a 2047 expiry date and although it has rights unseen on the mainland, its ability to push back against China has long been hamstrung by a partially elected legislature fundamentally skewed to the pro-Beijing camp and a leader appointed by a committee stacked with loyalists.

I’ve been told countless times in the last few weeks that I'm "leaving Hong Kong at the right time", which saddens me because I love this frenetic, maddening, non-stop city with its blunt humour and workaholic overdrive, its forested hills and fleets of sampans, ferries, yachts and cruise liners.

But while there are very real fears that Hong Kong is slowly being crushed by President Xi Jinping’s juggernaut, the democratic aspirations of the 2014 crowds have not been entirely extinguished.

Activists and some pro-democracy lawmakers continue to pull no punches in their criticism of the government, there is still some brave reporting and the annual vigil to mark the massacre of pro-democracy protesters in Beijing’s Tiananmen Square in 1989 sees thousands assemble to light candles.

More chickens are bound to be slain, but there are plenty of monkeys who believe that freedom of speech is worth defending and who do not want to see this great city lose the welcoming, entrepreneurial, freewheeling spirit that makes it so special. 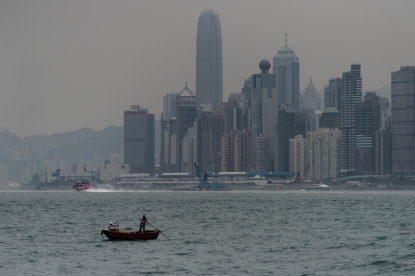 A fisherman steers his boat in Victoria Harbour in Hong Kong on September 29, 2016. (AFP / Anthony Wallace) 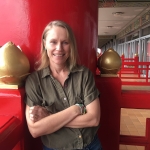