PARIS, June 26, 2015 - A notebook, a transistor radio, a piece of string: for people in a long-term hostage situation a tiny object is sometimes all that stands in the way of despair. Long after their ordeal comes to an end, many still cling on to these small things, like relics from their dark days.

Sometimes life can seem to hang by a thread. During the three months he spent as a captive in the Malian desert, Pierre Camatte had a ritual. Each morning he would write in the sand the number of days since he was seized, and tie another knot on a string plucked from his headscarf before burying it deep in his pocket.

Out of sight of his jailers from Al-Qaeda in the Islamic Maghreb (AQMI), the hostage in his sixties measured out the passing of time, as day followed day in the searing African sun. As if to prove to himself he was still alive.

Five years after his release in February 2010, Camatte carries the knotted fabric with him at all times. In a café in Epinal, a small town in France’s eastern Vosges mountains, he unfurls it on the table. A long black line with 90 knots. One for each lonely day he spent trying not to lose hope.

“The first is for my first day in captivity,” explains the former expat to Mali, his long hair flecked with grey. “On important days, like Christmas or New Year of the day I was freed, I added a scrap of fabric – to mark the occasion.” 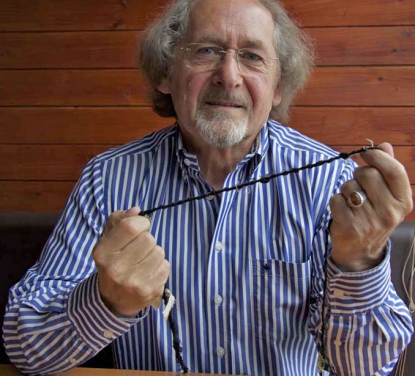 When he was first taken hostage, Pierre Camatte was stripped of everything. His captors seized him in the middle of the night in Menaka, in the country’s east, taking his watch, his smartphone and all of his personal belongings. Out in the desert he was issued with a pair of sneakers, some trousers, a sweat shirt and a headscarf. Isolated in the middle of an arid landscape, without any of his own things or contact with the outside world, a hostage is soon disorientated. They find themselves in a state of shock – which is exactly what the kidnappers want.

“During a hostage-taking, a captive is stripped of his individual identity,” explains Franck Garden-Breche, an expert on victim behaviour in such situations. “His belongings are taken from him, no one calls him by name, he has to seek permission for the slightest everyday gesture.”

“More often than not, his captors give him no indication of time. Psychologically, it ends up breaking him.”

On September 11, 2009, more than two weeks after he was kidnapped, one of his jailers agreed – as if throwing a dog a bone – to let him know the date. From that moment on, Pierre Camatte promised himself he would keep a calendar of knotted string, to make sure he would never lose track of time again.

“Like a set of prayer beads, it was my guide,” he says today. Of course some dates were harder than others. “At Christmas I tried my best to forget what day it was. I was not allowed to dwell on it. If I started thinking about the happy times everyone was having, I was done for.”

After three months of isolation and bullying at the hands of his captors, he tied his 90th knot. It would be the last. After his release, as he was bundled from embassy to airport, the hostage held on tight to his precious piece of string.

Sketching plans for an electric car

Everyday objects can become companions of sorts for people in hostage situations. Many keep a journal to ward off loneliness. Held for 11 months in Niger by the Islamic extremists of Ansaru, Francis Collomp begged until he was given writing materials.

After more than three weeks, the 63-year-old French engineer received a schoolboy’s notebook and a ball-point pen. Confined to a room of three metres by four, he spent several hours each day sketching plans for imaginary inventions – including a car operated by a mini wind-turbine.

His way of escaping from the reality of his cell, shared with fellow detainees, fat spiders and rats scurrying overhead. 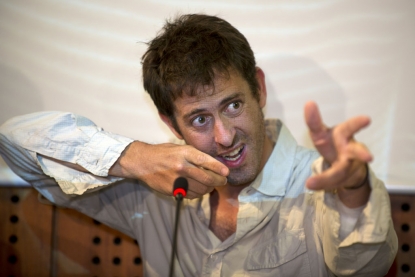 French journalist Romeo Langlois at a press conference at the French Embassy in Bogota on May 31, 2012 after his release by FARC rebels (AFP Photo / Eitan Abramovich)

The other side of the Atlantic, the journalist Romeo Langlois kept a blow-by-blow account of his month in captivity at the hands of FARC rebels who seized him in the Colombian jungle in April 2012, later turning his journal into a book.

Three days after he was kidnapped, the farianos provided him with a sort of hostage survival “kit”. Toothpaste and toothbrush, a tracksuit, deodorant – but also a radio set. And on Thursday May 3 – which is world press freedom day – he was given a notebook.

“It was a spiral-backed school exercise book, with a childish drawing on the cover. By the end of my 30 days in captivity, it smelled ripe. It was stained with caked blood, some mine, and some from squashed mosquitoes,” said the reporter, who won the Prix Albert Londres – France’s highest journalism award – for a video report on a botched Colombian army operation.

While he was being held by the rebels, with an injury to his left elbow, Langlois tried to keep his reporter’s instincts.

“In the jungle, I would spend an hour or two each day writing. It gave me the illusion I was still working as a journalist. I would jot down factual observations, but also my impressions. When I pulled out my notebook, I could see my guards getting paranoid. So I used to chat with them first, and afterwards go and write everything down unseen.”

Stripped of everything, the hostages would go to great lengths to keep hold of their objects. Unsettled by the sight of his captive scribbling day in day out, one of Francis Collomp’s jailers tried to take his notebook to have it translated. Collomp put his foot down.

“I told him I was keeping my book. That he could take a photo of it, but no more. Except that day he had no camera on him – and he never came back to ask again,” said Collomp, who would eventually break free while was his guards was distracted.

Sometimes an object would end up moving from hand to hand among fellow captives.

Detained together in Beirut in 1986, the French television journalists Philippe Rochot and Jean-Louis Normandin had ample time to immerse themselves in a 19th-century literary anthology left to them by their captors. From the first line to the last.

Thirty years later both men still wonder how on Earth the French Lagarde et Michard text book had found its way into the hands of a group of pro-Iranian radicals. But there is no understating how happy the two men were for the distraction it offered – as they whiled away the days inside apartments with blacked-out windows, cut off from the world.

“There was this one jailer, with a beard and limp, I had nicknamed him Quasimodo,” says Philippe Rochot with a wry smile. “When I picked up the Lagarde et Michard, I stumbled straight on some extracts from Victor Hugo’s ‘Notre Dame de Paris’ – and I found a description of the real Quasimodo.” Back in France after 105 days in captivity, Rochot received an unexpected gift: the complete Lagarde et Michard collection, along with a manuscript letter from a certain Andre Lagarde.

“In the time you spent isolated in a foreign land, you were not entirely alone. Happily the best envoys from our cultural past were surrounding you with solidarity – and perhaps, on subconscious level, helping you along,” wrote the book’s co-author.

Many ex-hostages cling to their lucky charm for a long time. Kidnapped for two days in Iraq in 2004, the cameraman Ivan Ceriex held on tight, for two years afterwards, to the prayer beads that remind him of his ordeal.

Tied up and passed from hand to hand, subjected to mock executions, Cerieix ended up being brought in the middle of the night before an Iraqi who spoke perfect English. The former member of Saddam Hussein’s Republican Guard questioned him for two hours.

“After a while he tells me that I have no reason to be detained and that he is going to release me. He even wants to remove my blindfold.”

A staunch atheist himself, Ivan Cerieix never did go to an imam. But he held on to the prayer beads. “They symbolised the end of my ordeal. They became a sort of lucky charm. Like a poker player’s horse shoe. I always knew exactly where they were. And I would count off the beads whenever I found myself in a stressful situation.”

Little by little, as time passed, the need to have the beads close-by began to fade. Today, he doesn’t remember where he put them last. “I don’t need them anymore, it was an experience that has been diluted by now,” he smiles. “I probably left the beads in a cigar box in the back of a drawer somewhere.” Whether surviving as a hostage or coping after their release, it is all about staying strong. “Each hostage will do all he can to protect himself, during and after the event. The more they can stay in that mindset – defensive and mentally active - the less chance there is they will ‘give in’, and become resigned to their fate,” explained the hypno-therapist Franck Garden-Brèche.

It is not unusual for ex-hostages to become attached to a symbolic trinket. “Some objects or activities can help them to prepare for what comes next, for returning to normal life after their release.”

But there also comes a time to turn the page.

Romeo Langlois made sure he left his radio set in good hands. He stumbled across it last year while packing up to leave his Bogota apartment. That day his old friend Vladimir Rodriguez – who worked tirelessly to secure his release, lobbying rebels and the army - was there again to help. So Langlois entrusted him with the relic.

Francis Collomp had written the name of the French entrepreneur Vincent Bollore on page one of his captive’s notebook, with instructions to send him his plans for a green car – should anything happen to their creator. After his release, Collomp met with the tycoon at his Paris offices, and intends to bequeath his plans for inclusion in the businessman’s personal museum.

On the cover of his notebook, there's a row of blank boxes for pupils to fill in: name, class, subject, school. In the last one, Collomp has written: “School of life.”

This article is part of a series on European hostages produced by journalism students at the Institut Francais de Presse in partnership with AFP. Click here to view the full series.

Hostages for sale in Syria