Mexico City -- When you’ve been on a few foreign postings, you start to develop a routine of sorts once you get to a new place. You take your bearings, make your way through the bureaucracy as you apply for residency, soak everything in and see if the stereotypes you’ve heard are true.

When I arrived in Mexico, in addition to my things, my bike, my guitar, I also had quite a bit of cliches -- Mexico is violent, the air is horrid, the roads deadly, earthquakes too frequent, corruption omnipresent and Mexicans… well, it depends if you’re talking about cartel members or not.

After a few months in my new home, I can attest (as I could in my previous postings in Washington and Jerusalem) that there is a bit of truth in nearly all of the stereotypes. Or nearly. First the violence. Not a day passes without someone being violently killed, be it as part of the fight against the drug cartels, gang violence, thefts that go wrong or domestic violence. Official figures tell the story -- 250,000 murders and some 40,000 missing since the government began its fight against the powerful drug cartels in 2006. Some 3,366 women killed as a result of domestic violence since 2015, the highest number in all of South America. Some 100 fellow journalists killed since 2000. People take part in a march demanding justice for the 43 missing students along a street in Mexico City on October 22, 2014. (AFP / Ronaldo Schemidt)

Pollution? Combined with the 2,240 meter-altitude of Mexico City, it makes itself felt right away, especially if you’re not used to it. Taking a full breath without a second thought becomes difficult. Especially when you’re passing a “pesero,” the ubiquitous minivans that spew black smoke at passing pedestrians. Then there are the “camionetas,”  Mexico’s answer to the American SUV driven by the well-off “chilangos” who live in the city’s better-off neighborhoods and seem not to preoccupy themselves with ecological considerations -- they seem to be more concerned with getting home the fastest possible way than with slowing the environmental damage they’re inflicting. Deadly roads? Mexicans welcome strangers with genuine warmth, but on the roads, it’s war. The average Mexican transforms into a tank driver on the road, rushing without hesitation at everything that moves, including vehicles much bigger than his. He prefers to verve out of the way at the last minute, at the risk of nicking a pedestrian, rather than let him pass. The rule of the land seems to be -- don’t ever wait and don’t ever slow down unless extremely necessary (ie almost never). Those who haven’t crossed an intersection in Mexico City have never known the strange, miraculous sensation of making it to the other side in one piece. 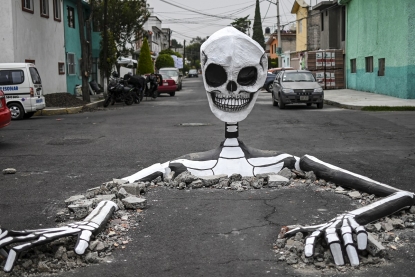 Earthquakes? Their threat is omnipresent and not just in the national subconsciousness.  Every once in a while -- four times in the three months that I’ve been here -- a slight tremor reminds everyone that worse is yet to come. Everywhere you look -- in houses, offices, cinemas, supermarkets, street corners, bus stops, airports -- signs indicate what steps to take and the safest places in case of an earthquake. Just to underline the danger, here and there you run into the damage done by the past big quake, which killed nearly 400 people in 2017. Signs in front of ruined buildings say that they will eventually be rebuilt. No date is specified. 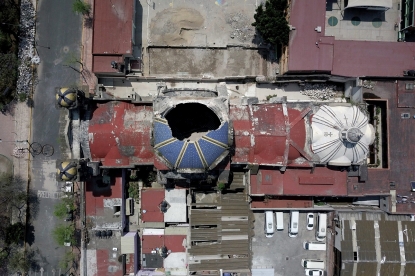 Then there is the corruption. I haven’t witnessed any first-hand yet, but it seems to be the number one topic of conversation with the locals. No-one seems to have taken their president, Andres Manuel Lopez Obrador, at his word when he promised to clean house before his election in July 2018. You get the sense that ordinary people have little faith in their government, starting from police and ending with top ministers. In return, they have little respect for government officials. Doesn’t take long to notice this -- you see how people run red lights right in front of policemen who blow their whistles in protest, but in vain. And pedestrians are then forced to scatter out of the way. At times, I feel like I’m back in Tel Aviv or Jerusalem, another land of somewhat less-than-diligent drivers. Just like there, you see drivers in Mexico look at their cell phones -- especially, it seems, as they’re turning -- before looking up and screeching to a halt to stop mere millimeters from an old lady crossing the street with her dog. But that’s where the similarities end. In Israel, police at least made attempts to stop such behavior. Here, the agents of law and order don’t even bother to move. 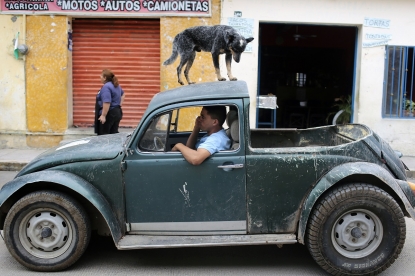 Riding a bike here is quite an experience (aside from breathing in cubic meters-full of pollution). Over the past several years, city hall has made enormous efforts to improve the safety of cyclists whose numbers have steadily increased here like in other major world capitals, especially by making a network of bike paths around the Bosque de Chapultepec, Mexico City’s Central Park. And while these measures are of course welcome, they are a long way from being sufficient. In a country where a driver’s license can be easily bought and where driver’s ed is not mandatory, the knowledge of road rules can be… fluid. And so it is not at all uncommon to see cars on bike paths, or delivery trucks park on them, or (like in Paris) motorcycles using the lanes to beat the traffic. Even pedestrians get in on the game -- I’ve seen many a mother pushing her baby stroller on a bike path, oblivious to the exasperated stares thrown her way. 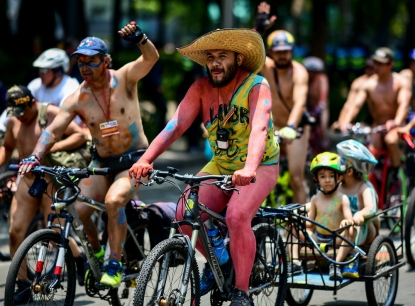 The rise in bikes has led city hall to run education campaigns, where agents patiently explain to drivers that it’s not good to hit a cyclist and that riding a bike in the city should not automatically lead to a cemetery. And each Sunday, cycling heaven -- cars are banned from the city center that’s taken over by thousands of delirious bike enthusiasts enjoying the risk-free rides with family and friends in a festive atmosphere as volunteers yell out the benefits of wearing a helmet. By the end of the day, however, the urban jungle closes in. 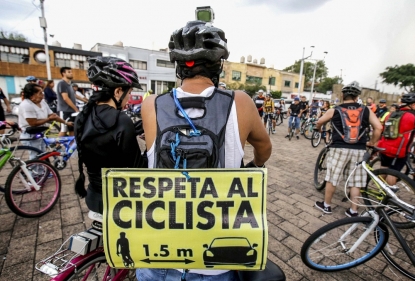 And finally, the Mexicans themselves. What’s difficult here is to reconcile the image that some of them give off -- that of a tendency  toward violence, judging by the number of violent deaths, and the smiles and warmth that you see day in and day out in the people whom you see on the street, in government buildings, museums, restaurants, cafes. 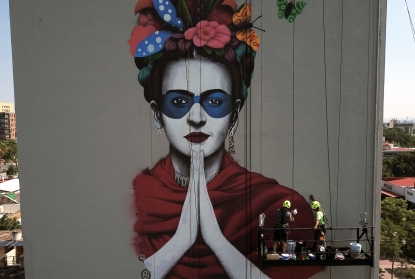 As with any foreign posting, my impressions are sure to evolve as I get to know my home better. With time, my mastery of the language will improve and I’ll start to notice nuances that slip by unnoticed now. Some of the local habits I hope to adopt (especially the immunity to the local viruses so that I can enjoy the rich culinary offerings), some not (like becoming an insane driver). The fun part is going through the motions. Chingale!

English version of the blog done by Yana Dlugy in Paris. 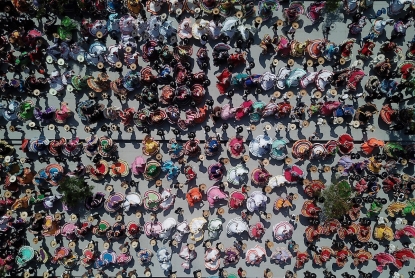 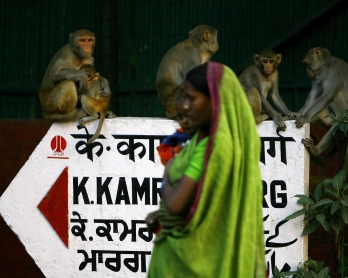