Getting the handshake that shook the world

Washington DC -- Going into it, I knew that the biggest moment would be that first handshake. Possibly of my career. This is the first time that an American president was meeting with a North Korean Supreme Leader. Ever. This moment will never happen again. So I knew that I had to get it right. Don't screw this one up.

Ahead of US President Donald Trump’s summit with North Korean leader Kim Jong Un in Singapore, we all knew we would be capturing history. The “we” are the still photographers of the White House travel press pool, comprised of representatives from AFP, AP, Reuters and the New York Times. Wherever the US president goes, we follow. We have all known each other for years; we’ve travelled the world together and work very well alongside each other. These photographers are professionals and some of the best in the business. 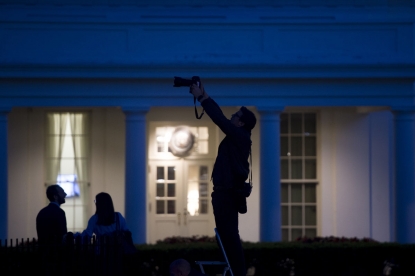 Reporters and photographers work outside of the West Wing of the White House at dusk in Washington, DC, May 15, 2017. (AFP / Saul Loeb)

More than 2,500 journalists were accredited to cover the summit, but the vast majority were located in the press center, miles away from the venue where the two leaders actually met. That meant we were some of the very few people to actually witness the Trump-Kim summit in person.

In total, there were about 25 members of the media (still photographers, video journalists and reporters) who actually got to see this history making day with our own eyes, evenly divided between Americans and North Koreans (plus a handful  from the host country, Singapore). That’s the way everything was -- evenly divided, so you didn’t have the impression that one side was the host in charge. So for every US security officer, you had a North Korean and a Singaporean. 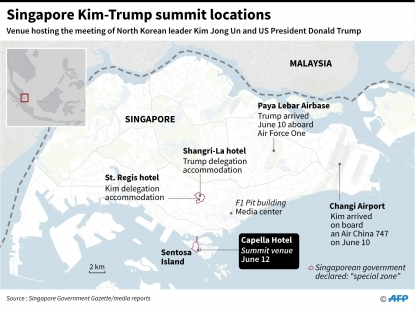 At an event like this, preparation is everything -- you have to make sure that you get a good position, that you have time to set up your remote cameras, and that everything is in working order. I had a scare at the start of the day, when I accidentally stepped into a pond, mistaking it for a walkway, while carrying all my cameras. Wet electronics don’t work very well, but luckily for me, I only ended up with water-soaked shoes and pants.

For the initial handshake, I had two remotes -- one right in front of the spot where they were going to shake hands for the first time and another along the path they would take to walk into their first meeting. (Trump would later point out the remote cameras to Kim Jong Un as they walked, perhaps to explain the clicking sounds the bushes were making). In addition, I had two Nikon D5 cameras with me, one with a 24-70 lens for the wider angle shots and another with a 70-200 for the tighter shots of the two leaders side-by-side.

The North Korean photographers seemed nice enough, but were a quiet group. For starters, none of them seemed to understand or speak English, and none of us spoke Korean. And we got a sense that they were much more nervous and tense than we were (and we were nervous and tense). Which is totally understandable, when you consider the history of North Korea. You could just sense that they were under immense pressure to get the shots and if they didn’t get the photos that they needed, the consequences might be… pretty significant. 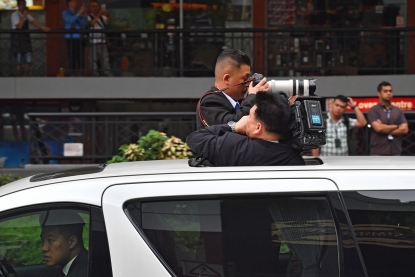 With an event of this magnitude, with this much global interest, taking the photos is only half the battle. The other half is getting them out on the wire – and quickly. The cameras were set up so that as soon as I took a picture, they would go straight to the AFP regional photo desk in Hong Kong via the cell network, where editors were ready and waiting to make any adjustments necessary and send them out into the world as quickly as possible. We all crossed our fingers that the cell network would keep working and wouldn't become overloaded – or worse – jammed by security services.

We knew that the leaders would come out right at 9:00 am. The whole event was timed meticulously. We knew that we would photograph the first handshake and the first one-on-one meeting after that. What access we got afterwards would depend on how the meetings went. But what mattered most was that first handshake. 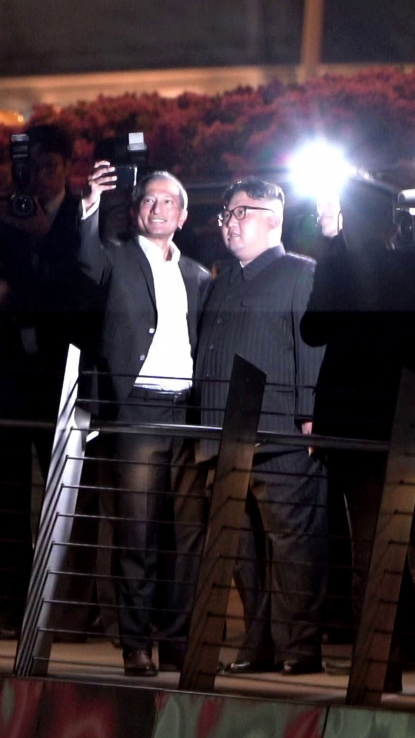 Ahead of the summit -- Singapore Foreign Minister Vivian Balakrishnan (left) takes a selfie with Kim Jong Un the night before the summit, as the North Korean leader took a stroll around some of the city-state's sights. (AFP / Nicholas Yeo)

I’ve been covering the White House for 11 years now and throughout that time, I’ve been able to photograph some pretty unique situations and places all over the world. I’ve covered three US presidents, the queen and the pope; presidential inaugurations and State of the Union speeches. I've also made several unannounced trips with presidents into warzones, including with George W. Bush when shoes were thrown at him in Baghdad. But this was without a doubt the most anticipated event that I’ve ever covered.

At the end of the day it's just two people shaking hands, which is something I've photographed thousands of times before

Obviously you feel the pressure -- I was the only AFP photographer there for the initial handshake. The exposure must be right, the shot must be in focus. But at the end of the day, it’s just two people shaking hands, which is something that I have photographed thousands of times before. (Which is what we just kept telling ourselves).

When the moment happened, it was very well choreographed. They set it up so that visually it was perfect. Each leader came from his perspective side, strode toward each other against a background of American and North Korean flags and then they stopped exactly in the center, shaking hands for a long time, 13 seconds. I'm sure they wanted to make certain that we all got our pictures.

I photographed away, starting with a 24-70 as they walked toward each other to get the overall scene and then switching to a 70-200 during the handshake to get a tighter shot. 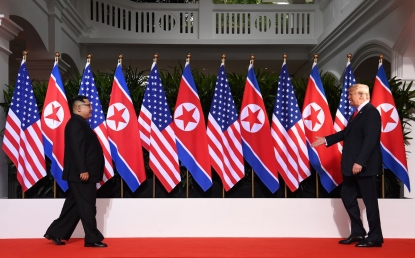 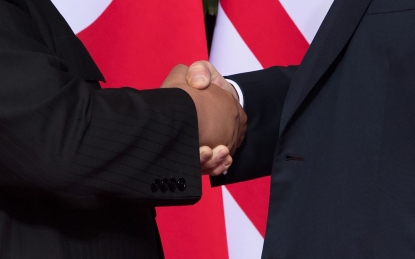 Every time I pressed the shutter on the camera I was holding, the remote cameras were firing as well. The pictures from all of them streamed into the computers of the photo editing desk in Hong Kong, where the editors managed to get them out within seconds. Which was crucial -- both to get that first photo out and also to make the deadlines of the newspapers back in the US, where it was already past 9:00 pm on the east coast.

As I worked, I couldn't shake the feeling of how surreal it all was. Here is this guy, Kim Jong Un, the leader of North Korea, who like his father and grandfather before him had vowed to annihilate the United States, who is hardly ever seen by average people in his own country, let alone be in the presence of Americans. And here he was, shaking hands with... the president of the United States (who just happens to be Donald Trump, former host of "The Apprentice," and one of the most famous people in the world). Just completely surreal. 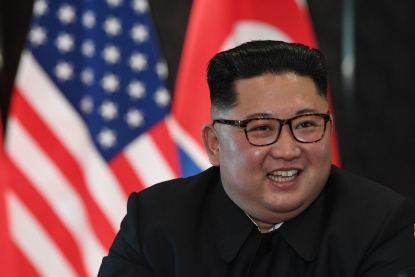 Kim Jong Un smiles at a signing ceremony at the end of the summit. (AFP / Saul Loeb) 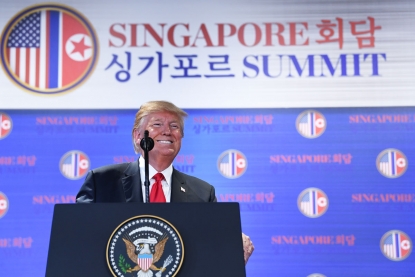 As the White House travel pool took stock of the day's events during the long flight on Air Force One back to Washington, that’s all we kept saying to each other -- “I can’t believe that just happened. Unbelievable. Did we really just see this? The President of the United States, Donald Trump, shook hands with Kim Jong Un?” Whatever your opinion on the politics of it all, it’s something that can only be summed up in one word: historic. 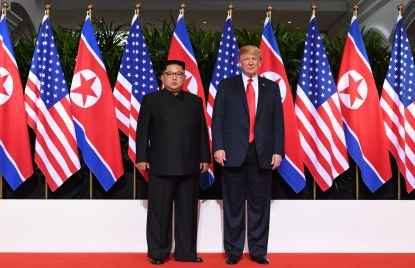 US President Donald Trump and North Korean leader Kim Jong Un pose for the cameras after their first handshake at the start of the summit. (AFP / Saul Loeb) 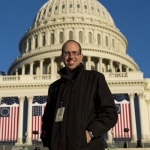 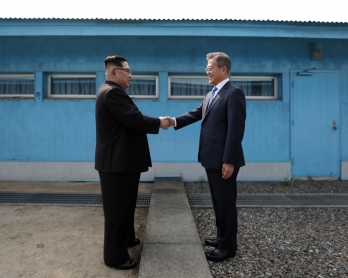 New start or deja-vu in Korea?

Culture shocks in the open sea