A prisoner dying of dysentery at Buchenwald concentation camp, as it was liberated in April 1945 (AFP Photo / Eric Schwab)

PARIS, February 13, 2015 - It comes down to a few dozen pictures by Eric Schwab, preserved in the Agence France-Presse archives. An insignificant number in a photographic fund of more than 30 million digital documents and seven million analog files. But whose value in historical terms is inestimable.

One of the first photographers to work for the modern-day AFP, founded in 1944 as France was freed from Nazi occupation, Eric Schwab was among the very first witnesses to the boundless horror that Allied forces uncovered as they advanced into Germany, liberating the death camps one after the other.

Schwab formed a partnership with the American writer and journalist Meyer Levin, travelling together into the darkness on board their jeep “Spirit of Alpena”. Both were on a painful quest, Levin to investigate the fate of Europe’s Jews in World War II, and Schwab to find his mother who was deported in 1943. The gate of Buchenwald camp, with the words 'Jedem das seine' (To each what he deserves) (AFP Photo / Eric Schwab)

“We had known. The world had vaguely heard,” Meyer Levin wrote in his account of that time, published in 1950 and entitled “In Search”. “But until now no one of us had looked on this…. It was as though we had penetrated at last to the center of the black heart, to the very crawling inside of the vicious heart.”

The two Jewish war correspondents were “among the very first to enter that hell,” wrote the French historian Annette Wiervorka in a recent study entitled, “1945, the discovery” – which is prefaced by Levin’s words.

Born in September 1910 in Hamburg, to a French father and a Jewish German mother, Eric Schwab arrived in Paris in the early 1930s where he cut his teeth as a photographer shooting fashion shows and film sets. When war broke out in 1939, he was called up and briefly saw action in northern France, before being taken prisoner in June 1940, along with thousands of other French troops, after the Allied defeat at Dunkirk. 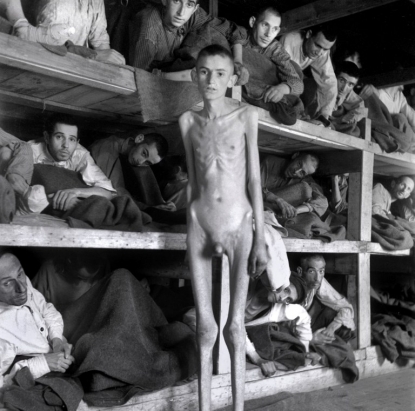 Little is known about that time in his life. But we do know he managed to escape from a train packed with prisoners and bound for Germany, returning to the Paris region and joining the Resistance. Annette Wierviorka’s research next locates him near the Loire River in 1944, fighting with the French Forces of the Interior as the Resistance was then known.

AFP’s pre-war ancestor, the Havas news agency, was taken over by the occupying forces from 1940 to 1944 and renamed the French Information Office (OFI). On August 20, 1944 a group of journalists from the Resistance seize the OFI’s office and issue the first dispatch from a liberated Paris, under the name of Agence France-Presse.

The following month, Schwab begins to work for AFP. Accredited with the US army, he becomes a war correspondent, following the Allied troops in their advance.

In early 1945 he meets Meyer Levin. The powerful encounter marks the beginning of a great friendship, and a shared journey into the world of the concentration camps. 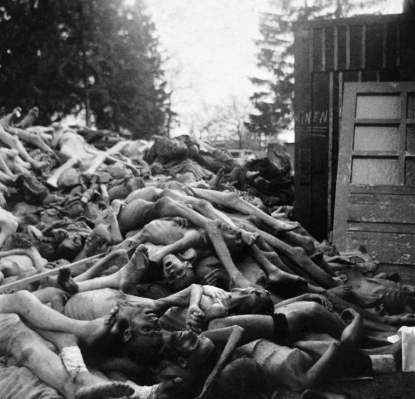 The first they reach, in April, is Ohrdruf, an annex of Buchenwald, in what is today the German land of Thuringe. There are no surviving Schwab pictures of the camp – probably due to a gap in the archives, according to the Holocaust historian Wierviorka.

From there the pair head deeper into Germany, to the camps at Buchenwald, Dachau, Leipzig-Thekla and Terezin.

Schwab’s first known pictures are taken in Buchenwald and Dachau, including the entrance gate to the first camp, bearing the terrible inscription « Jedem das Seine » (« To each what he deserves »).

Piles of skeletal bodies, emaciated faces, the doors to a crematorium, survivors who look like corpses themselves. In two dozen shots, many of them unbearable to behold, he tells the full horror of the Nazi extermination camps. He photographs inhumanity laid bare. 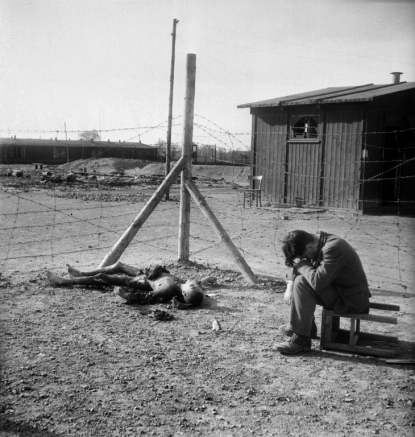 The camp of Thekla, where the Germans locked in and burned alive burned hundreds of plane factory workers ahead of the arrival of Allied forces at the end of April 1945 (AFP Photo / Eric Schwab)

His image of a man dying of dysentery is abominable. Taken around April 12, it shows a man’s hunched, fleshless upper body, his eyes staring emptily ahead. It runs on the front page of the French magazine Franc-Tireur later that month. Another of his shots, taken at Leipzig-Thekla, makes front pages for its depiction of an unidentified man sitting with his head in his hands, a few metres from a dead body.

Among the inmates at Buchenwald, Schwab finds members of the Resistance and journalists who worked for the clandestine media under the occupation. On one photograph of seven survivors, there are two former journalists for Havas: Christian Ozanne, pictured in a prisoner’s black-and-white stripes, and Maurice Negre who would go on to become AFP director general three times between 1946 and 1954.

In Dachau, Schwab photographs the number tattooed on the bone-thin arm of a Jewish prisoner. Another shot shows a man in striped prison garb talking to a woman described as a camp prostitute. 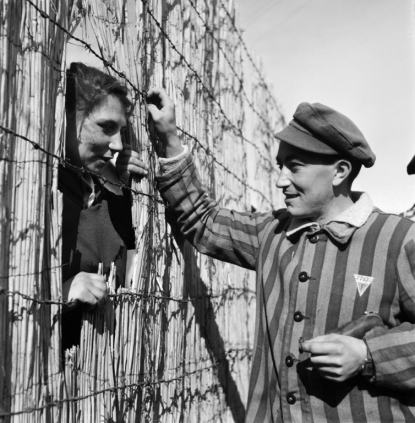 There is also some hope amid the darkness, as with his image of a group of French prisoners standing listening to the Marseillaise national anthem. Or another of a priest celebrating mass for the camp’s dead.

After the horror of Dachau, the two war correspondents witness the capture of Itter Castle in Austria, used to incarcerate high-profile French figures– from ministers and political leaders to generals and diplomats.

Among them were two former prime ministers, Edouard Daladier who signed the infamous Munich Agreement on France’s behalf in 1938, and Paul Reynaud, as well as the generals Maurice Gamelin and Maxime Weygand, the former tennis champion Jean Borotra and Marie-Agnes Cailliau, the sister of General Charles de Gaulle. 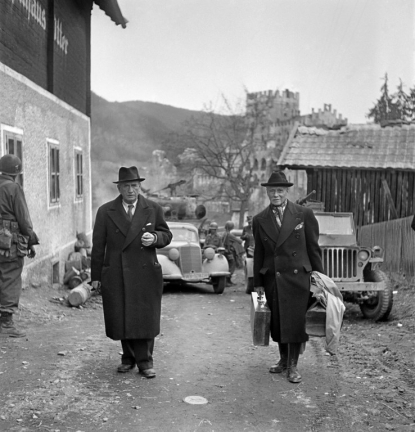 US troops – fighting alongside small contingent of anti-Nazi German soldiers – take the Tyrolian castle on May 5, 1945, allowing Schwab to shoot a fine series of portraits of the illustrious captives and their liberators.

The last stage of his journey takes him to the camp at Terezin, known in German as Theresienstadt, in what is today the Czech Republic. A few days from the end of the war, the region is in chaos as vast numbers flee from advancing Soviet troops towards US-controlled territory. 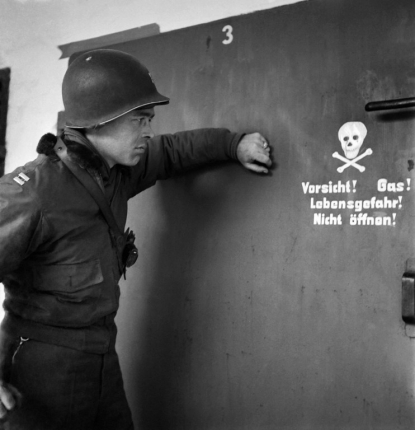 By this point most of the camps have been liberated. Eric Schwab is still searching for his mother, Elsbeth. At the entrance to Terezin, he leaves his travelling companions to head towards the barracks. After some time he returns, with a small woman by his side.

Then aged 56, Elsbeth has managed to escape death and has been looking after child survivors at the camp. It was, of course, an intensely emotional reunion. It would also appear that out of respect he refrained from photographing his mother – or at least from publishing the images.

After Terezin, Schwab and Levin part ways, according to Annette Wieviorka. The first has reached the end of his journey, having miraculously found his mother, alive. The second will pursue his investigation into the annihilation of the Jewish people. 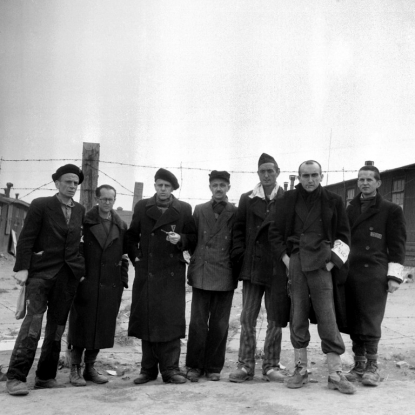 Members of the French Resistance and clandestine press at the Buchenwald concentration camp in April 1945. Among them two former members of Havas: the future head of AFP Maurice Negre (with the pipe) and Christian Ozanne (in striped trousers)

Photographic evidence of the concentration camp horrors was widely disseminated as early as 1945, but Eric Schwab’s work did not earn him the renown of some of the other photographers who documented the camps’ liberation, such as Margaret Bourke-White, Lee Miller or George Rodger.

As often happens with news agency photos, his images were printed in the media but not attributed to him by name. Few people remember his face. Annette Wieviorka’s book includes one of his rare self-portraits, taken with a Rolleiflex camera, in which he poses in a war correspondent’s uniform.

It would take several years for his talent to be fully recognised, particularly the powerful portraiture and composition found throughout his now-iconic works.

For the historian of photography Clement Cheroux, Schwab’s work stands apart in that, as a Jew himself, he was documenting the suffering of his own people. “As the son of a deportee, he was clearly seeing his own mother’s ordeal as he photographed these survivors,” he writes in his book “Memory of the camps”, about the work of Schwab and fellow photographers of that black chapter.

It was Meyer Levin’s son, Mikael, who pieced together the story of the two men’s journey in a book entitled “War Story”, enabling the identification of Schwab’s pictures within AFP’s image fund.

“Mikael was the conduit for his father’s work, but also for Schwab’s,” says Annette Wierviorka. A large part of his work is now collected in the French national library. Schwab’s work was the subject of an exhibit organised jointly in 2004 by AFP, the French national archives and the Resistance Museum of Champigny-sur-Marne. 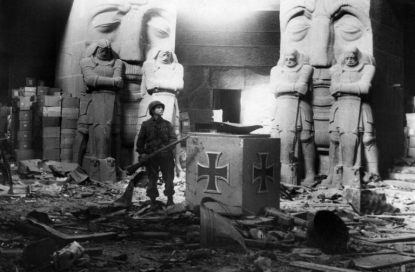 A US soldier in the Leipzig Monument commemorating the 1813 Battle against Napoleon, in April 1945 (AFP Photo / Eric Schwab)

After the war, Eric Schwab and his mother leave France, settling in New York in 1946. For a few years he continues to work for AFP – on far lighter subjects. A passionate jazz fan, he shoots the streets of Broadway, the jazz clubs of Harlem, people swimming off Coney Island. AFP still has in its archives a few shots of Nat King Cole, which he took at a concert at the Apollo Theater in Harlem in 1950.

Eric Schwab leaves AFP in the early 1950s. He goes on to work for various UN bodies in New York and Geneva including the World Health Organisation. He continues to travel widely and takes a particular interest in the refugee question. A picture he took of a family of refugees from India’s Punjab in 1951 is included in the legendary 1962 photo exhibition in New York entitled “The Family of Man.”

Eric Schwab dies in 1977 at the age of 67, leaving no known account of the discovery of the camps, nor his reunion with his mother.

Yves Gacon is AFP’s director of archives and publishing 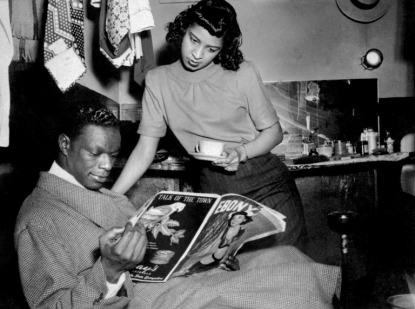 Pianist and jazz singer Nat King Cole in his box at the Apollo Theater, New York in the 1950s (AFP Photo / Eric Schwab)