US President Barack Obama arrives for a press conference at the White House on February 9, 2009 (AFP Photo / Saul Loeb)

WASHINGTON, February 16, 2015 - Photographers covering the White House have to deal with many restrictions on when and where we can snap the president. For most events, we can only work in designated areas which provide little movement and not much choice in how we can take our photos.

One of the ways we can supplement these angles and work around these restrictions is by placing remote cameras in locations where we ourselves cannot physically be - whether it be a high angle in the room, a spot behind the president's podium or somewhere alongside the stage. For logistical and security reasons, there simply could not be a single photographer, let alone photographers from all the wire agencies covering the White House, in these spots.

During a Merkel-Obama press conference this month, a remote was set up on a small tripod behind the stage to capture a different angle of a press conference, whereas I was in a position far in front of the stage. This allowed for two photos of the same moment from very different vantage points: 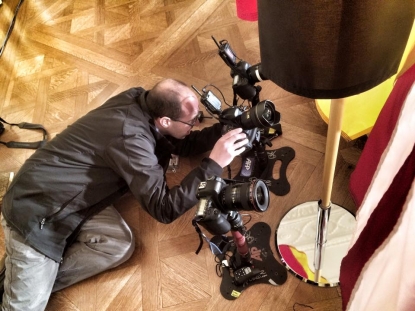 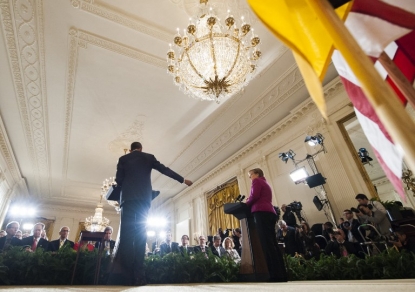 It would look very strange for a photographer to be standing behind the president on a ladder during a press conference - not to mention the Secret Service would never allow it. Plus, this allows one photographer to shoot an event using two very different angles. The use of remotes is nothing new - sports photographers have used them for many years to provide viewers with images from behind the backboard at basketball games, under the water at swimming events and high overhead at hockey games.

In politics, we follow the same theory - put the viewer in a position they'd normally not see otherwise. By using a mini tripod and specially designed clamps, we can place cameras most anywhere. The camera is then fired using a radio trigger from wherever we are standing nearby, or in some special circumstances, we can set the camera to take a photo at a predetermined time.

For instance, for President Obama's second swearing-in ceremony during the 2013 inauguration, I placed a remote camera on the roof of the US Capitol several days before the actual ceremony with a timer that would begin firing the camera when the president took his oath. Because of security considerations, a photographer could not be on the roof during the actual ceremony or in the 48 hours prior.

US President Barack Obama takes the oath of office at the US Capitol on January 21, 2013 (AFP Photo / Pool / Saul Loeb)

Just like doing anything in a highly controlled environment such as the White House, you sometimes have to negotiate on where best to place the remotes. Wherever we as photographers may want to put the remote, White House staff might disagree whether for esthetic reasons (the remote will appear in a television shot for instance) or because it is simply too close to where the President might walk.

Anytime you are dealing with technology, you are bound to occasionally have failures. Sometimes it might just be that the subjects didn't walk where you expected them to walk so the photo you had in your mind never materialized, or your radio signal never got to the remote trigger to actually fire the camera. There's so many different radio signals flying about that it is easy to have interference. Or you might have just set the camera up completely incorrectly with the wrong exposure or focus. You often end up just crossing your fingers and hoping it all works - until you can get back to the remote, look at your photos and see that all that practice paid off (or didn't!)

Using the latest in technology, we can now use our cellphones to adjust the settings on the remote camera, see what the camera is seeing and take the photograph, even though we might not even be in the same room. As news photographers, we are always looking for new and unique angles when we cover events. Placing remote cameras gives us another tool to do this.

A remote camera was placed behind the shrubs in the middle of the South Lawn to get a closer and better angle for a moment of silence to honor victims of the 9/11 attacks, in a position where it would have been distracting to physically have a photographer. 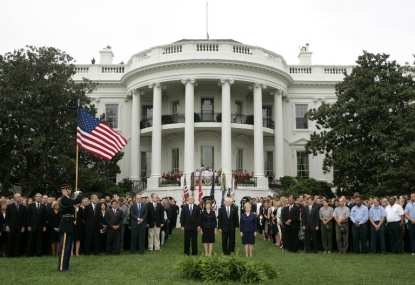 US President George W. Bush, First Lady Laura Bush and the vice-presidential couple hold a moment of silence for victims of the 9/11 attacks, on September 11, 2007 (AFP Photo / Saul Loeb) 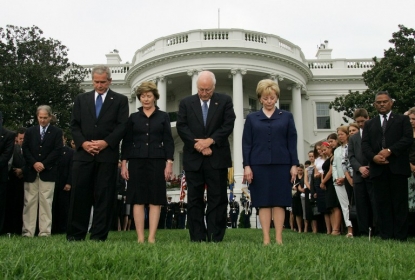 US President George W. Bush, First Lady Laura Bush and the vice-presidential couple hold a moment of silence for victims of the 9/11 attacks, on September 11, 2007 (AFP Photo / Saul Loeb)

A remote camera was used during a state visit by Indian Prime Minister Singh to capture their entrance (with other remote cameras visible along the walkway): 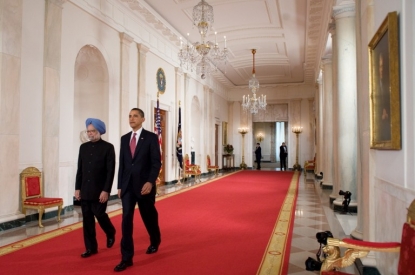 And a remote camera was attached with a clamp to a bar near the ceiling during an Obama statement to the press to get an overall view of the room: 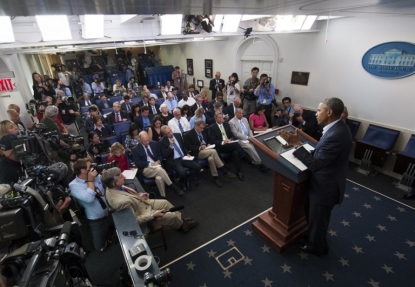 US President Barack Obama addresses the media in the Brady Press Briefing Room of the White House on August 18, 2014

Saul Loeb is an AFP photographer at the White House

A brief game of football on Ukraine frontline