Liwa Desert, Abu Dhabi -- I first saw the desert in 2006, when I moved to the United Arab Emirates for work. My country Iraq, the land of two rivers, is green. We do have some desert areas, but I wasn’t born or raised there. So I was fascinated by this new landscape. Still am.

There is this misconception that the desert isn’t a “picture-worthy” place, that it’s stagnant, unchanging, flat. I disagree. The desert fascinates me and the more I work in it, the more I love it. 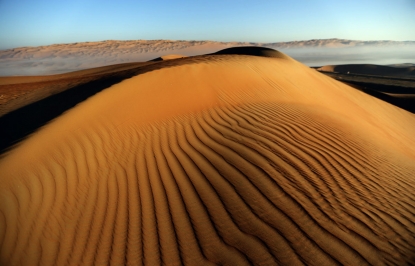 I always try to make sure that I find different angles on anything I’m covering. Dubai is all towers and high-rises. So when I arrived here, I made it a point to leave the confines of the city and head to the desert. 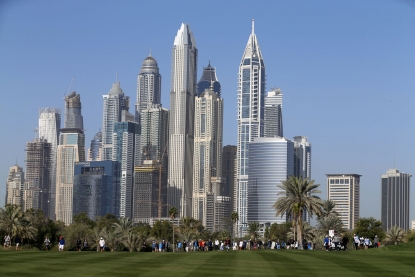 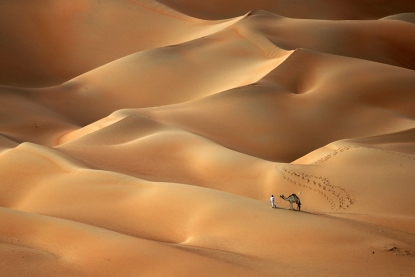 The UAE is very good -- and unique -- in how well it develops and maintains both its urbans centers and its deserts. The deserts here are pristine. There is cell phone coverage almost everywhere, making work (and life) much easier.

I love my trips into this wilderness. They take me away from the routine of the city. No noise, no overcrowding. I usually head to the Liwa desert, which is about 650 kilometers outside of Dubai and a three-hour drive west of Abu Dhabi. I usually camp out with local tribes for three or four days. It’s impossible to get good pictures unless you spend time here and build friendships. The tribe I usually stay with now treats me like part of the family.

The first time I went to visit the desert in 2013 -- my very first trip was to Liwa -- I couldn’t drive all the way in, so I had to walk. When I reached the local tribe, they were praying – so I set my cameras aside and prayed with them. 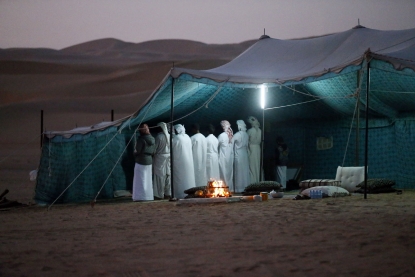 Emiratis gather for prayer inside a tent at the Liwa desert, December, 2013. (AFP / Karim Sahib)

That’s how we met and first connected. They were intrigued by the cameras, so we spent the afternoon talking. I felt it wasn’t appropriate to ask if there was a nearby hotel. But as I was mulling over how to broach the subject, they brought dinner out and told me I wasn’t going anywhere – that I was their guest and would stay with them as long as I needed. And I did. I stayed in one of their tents. 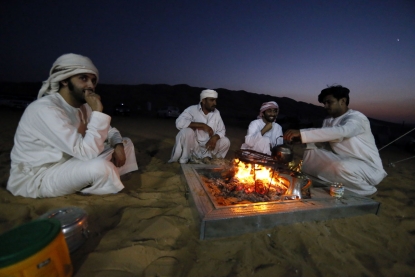 On that first trip, it hadn’t rained in Liwa for about six years. At 5:00 the next morning, it started to pour. I went out with my cameras and snapped a picture of two men guiding their camels across the wet sand dunes. 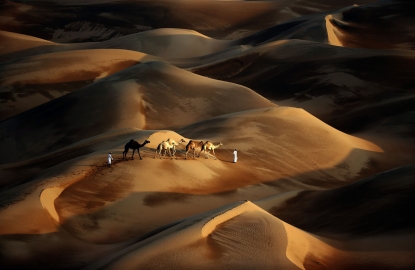 Tribesmen lead their camels through the sand dunes of the Liwa desert after a rare rainstorm, November, 2013. (AFP / Karim Sahib)

By mid-morning, when I returned to the tent, they greeted me with such warmth – they said I was their lucky charm, that I had brought the rain. Now, when it doesn’t rain all year, they joke around with me, “Hey Karim! Where are you? We could use some rain over here!"

Many members of the desert tribes live in Abu Dhabi, but they have a deep connection to their roots. In the desert, they have stables for their camels, which are powered by solar panels and have water storage facilities. 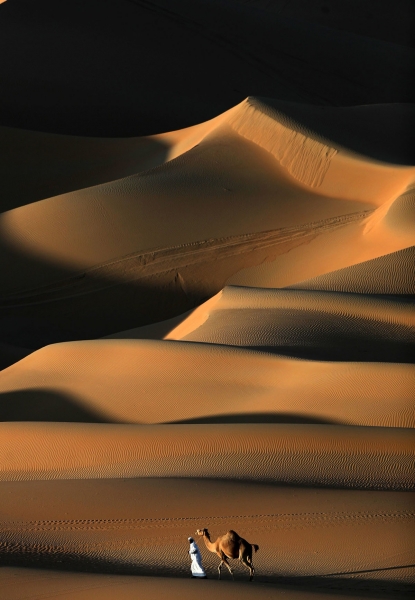 Since that first visit, I drive out to the Liwa desert pretty regularly.

The tribe's hospitality is all-encompassing.

They are generally welcoming to all guests, but now that they know me well, I suppose I am treated in a special way.

I feel like a true Arab here, connected to my Arab roots.

The idea of hospitality and of being one with the earth.

The holy books -- the Koran, the Bible and the Torah -- all say that man is from the earth and will return to the earth.

No place reminds you of the earth more than the desert.

It’s just you and the stars and the earth.

With each trip, I learn more about the culture of the desert.

Through the years I’ve learned where and at what time to position myself to get the best shots. I usually shoot in the morning and then around dusk. During the day, it’s way too hot and the lighting isn’t great, it’s flat.

After 10:00 am, time becomes heavy, so I don’t work in mid-day. There’s always tea, coffee and dates set out for family and friends in the tents, as well as drinking water. In that heat-induced downtime, I catch up on emails and hang out with the families.

For me, the desert has towers of its own, the sand dunes. And these towers never look the same. They change with the light, the seasons. In the morning, the lighting is soft and the sand’s orange. At noon, they’re yellow – almost blindingly white. In the afternoon, they’re a burnt orange – warm, almost like sunset in the sand. 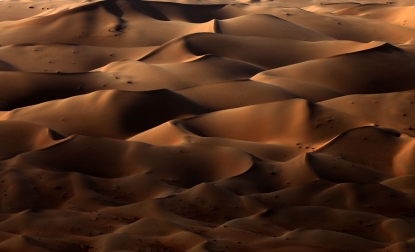 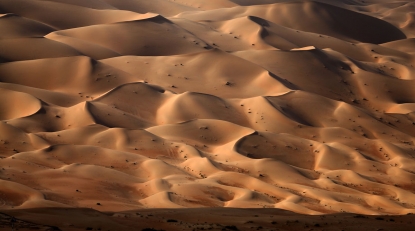 I don’t take drone pictures for the moment, as you need a special license to operate one and they’re hard to come by. So I climb on the dunes to get my aerial shots. 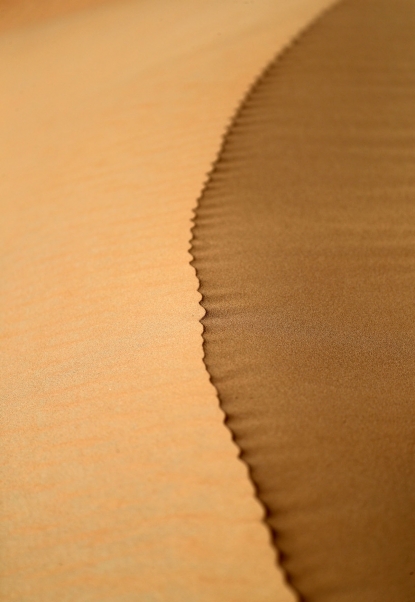 The Liwa is considered one of the region’s largest, around 100 kilometers shaped like a crescent and laced with dunes. It’s endlessly enjoyable to discover them, particularly when they are so pristine -- no footprints, only the sounds of the birds. And the way the light plays on them is almost like an art lesson every time. 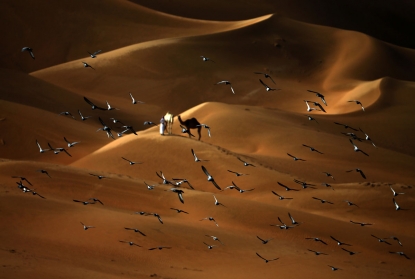 Another fascinating part of the desert for me are the animals. 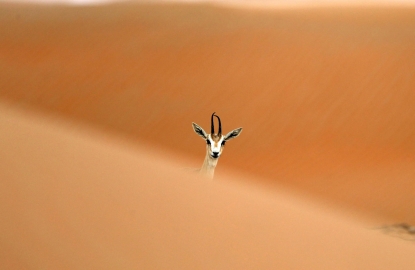 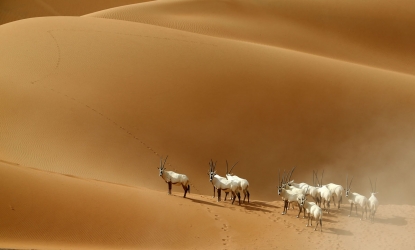 Emiratis have a tradition of falcon hunting -- hunting using falcons to catch smaller birds. The way they take care of their falcons and their camels is fascinating. When they drive around with their birds, the falcons seat in the front seat, the the air conditioning adjusted to the ideal temperature for them. 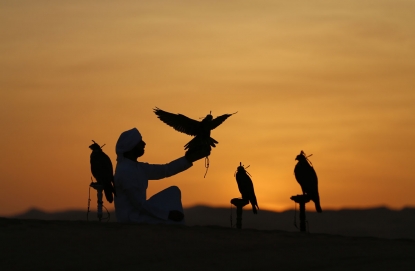 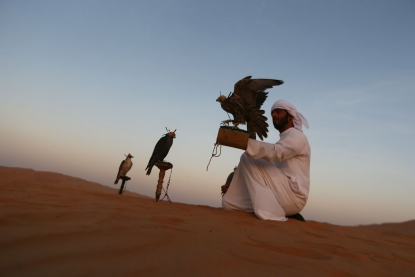 Over my time working here, I’ve seen plenty of tribesmen who live in the cities as well. It’s their their place of residence, their place of work. But their place of belonging is the desert. A feeling I can now relate to.

This blog was written with Natacha Yazbeck in Dubai and Yana Dlugy in Paris. 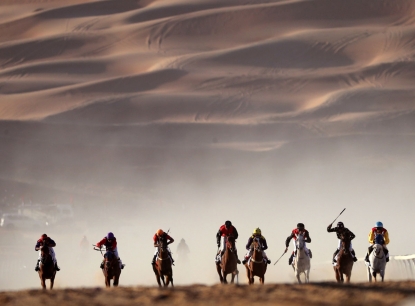 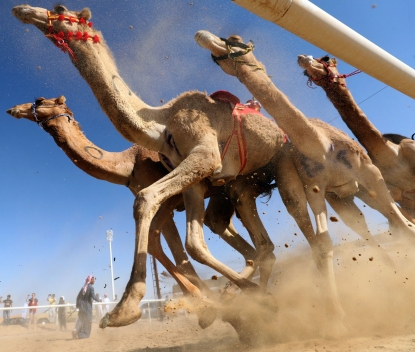 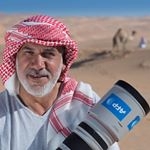 Photographer based in Dubai
All posts 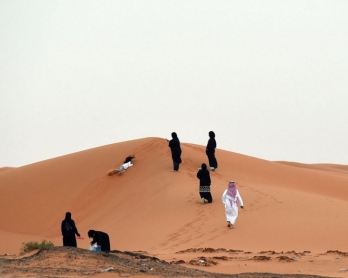