Baghdad: forever on the brink

Baghdad - Stop me if you’ve heard this one before. It goes like this. An Indian shaman visited Baghdad in the 1990s, when Iraq was suffocating under international sanctions targeting then-dictator, Saddam Hussein. He tried to convince a group of Iraqis that magic was real and that he could control it.

But an Iraqi soldier, who had survived both the Iran-Iraq war and the 1990 invasion of Kuwait, wasn't convinced. “What do you call an entire family who lives a month on a government salary worth one dollar?” he asked. “That’s real magic,” the Indian reluctantly replied.

That’s Iraq. A country that lives on the magic of its people, on their mystifying capacity to survive miseries flung at them over the last 1,400 years.  I myself witnessed only the last few years, landing in Baghdad in 2017 to take up a post as Arabic correspondent for Agence France-Presse. 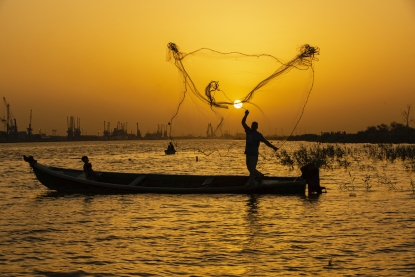 While I may not have been raised in Iraq, I was raised on it. Growing up in Lebanon, I learnt that Iraq is the modern-day heartland of ancient Mesopotamia, the beloved 'Land between the Two Rivers' -- the mighty Euphrates and the Tigris that flow from Turkey in the north to the Gulf in the south.

As a child, Iraq was home to the Kahramana fountain from Ali Baba and the 40 Thieves, it was the land that evoked Shaharazad and Shahriyar, Aladdin and other enchanting characters from the Arabian Nights. In Iraq, they told me, you could walk down a boulevard named after legendary Arab poet Abu al-Tayyeb al-Mutannabi, stepping into the century-old Shahbandar Café. 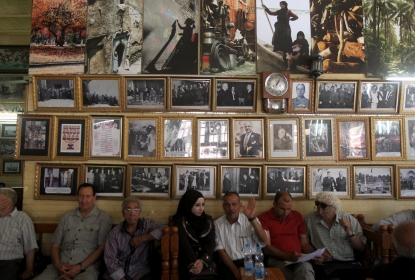 In Iraq, they told me, you would find the birthplace of music: from Ziryab, the oud legend and composer born in Mosul who travelled to North Africa and Andalusia in Medieval Islamic times, through to the ballads of 20th century Iraqi singer Mohammad al-Qabanji, all the way to khashaba, the unique percussive style of music in the southern-most city of Basra.

In Iraq, they told me, you could buy hand-woven carpets and landscapes of the marshes, or hot pillows of bread from corner bakeries. The city’s faded glamour, they said, was priceless. 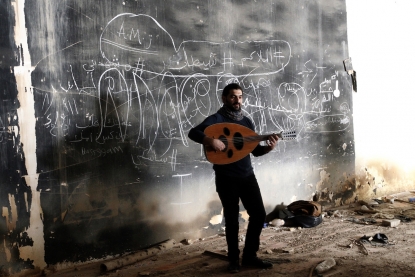 As I grew older, Iraq was the First Gulf War, the devastating sanctions, the Second Gulf War. Iraq was Saddam, the US-led invasion and civil war. Iraq was the rise and fall of Islamic State (IS), the jihadist group that imposed a brutal 'caliphate' from Iraq to Syria, responsible for killing thousands.

Arriving in Baghdad was like stepping into a history book, where the characters look you in the eye, relaying in painful detail how their cradle of civilization was reduced to rubble.

I will never forget Tabarak. The nine-year-old girl, who had just escaped from IS-held Mosul with her elderly grandmother, could not stop coughing. “My father died. Daesh killed him. My mom was wounded with my handicapped sister,” she told me using the Arabic acronym for IS. 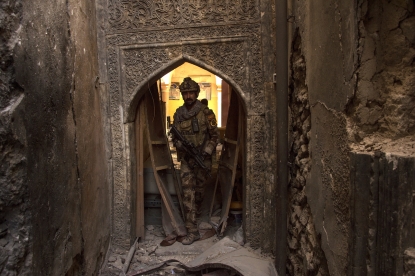 A member of Iraq's Counter-Terrorism Service (CTS) advances in the Old City of Mosul on July 5, 2017 (AFP / Fadel Senna)

I was embedded with Iraqi security forces in Mosul in April 2017, covering their fight to wrest back the city from IS. I had thought myself tough, a Lebanese journalist from a generation raised on back-to-back war and occupation.

But the waves of displaced people streaming out of Mosul paralyzed me. They were burdened with so much, and at the same time had left so much behind.

I tried to control my emotions in front of Tabarak, to hold back a tear threatening to escape down my cheek. I will never forget her smile when she laid eyes on a piece of chocolate, something she hadn’t seen in more than three years living under IS.

Another elderly man who had just escaped asked me for a cigarette, illegal in IS-controlled areas. “This is worth a million bucks,” he said, inhaling the smoke as he sat on the edge of the sidewalk. And I remember two young boys, Ahmad and Suhayb, playing football in their recently liberated neighborhood. Under IS, they were banned from such simple pleasures. 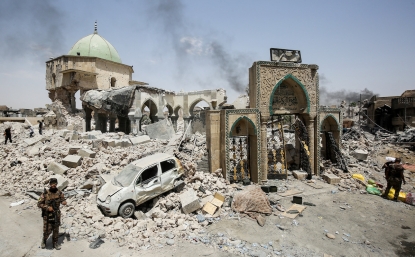 Time in the street, I learned, could be a death sentence. When our team arrived in Ahmad and Suhayb’s neighbourhood in a Toyota Landcruiser – nicknamed “Monica” in Iraq after Monica Lewinsky for reasons no one remembers – the residents looked terrified.

They told me that IS used the same cars to arrest civilians before killing them. “We knew Monicas meant execution and minivans meant lashings,” said Ahmad. I always found Iraqis’ nicknames for cars amusing. 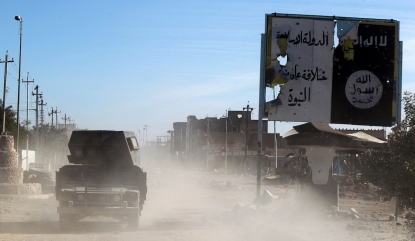 Iraqi counter-terrorism forces drive in the Tameem district of Ramadi, a large city on the Euphrates 100 kilometres (60 miles) west of Baghdad on December 9, 2015. (AFP / Ahmad Al-rubaye)

Big, boxy Chryslers are called “Obamas,” allegedly because former US President Barack Obama drove one.  Other models are named after famed Egyptian actress Leila Alwi and the UAE’s first leader, Sheikh Zayed – and even crazier figures, including Pokemon character Pikachu and the inexplicable Umm al-Khobza, which translates to 'bread mom' a generic name and Iraqi slang for something that can benefit you.

In the northern city of Tal Afar, members of the Hashed al-Shaabi, a state-sponsored network of mostly Shiite armed groups with close ties to Iran, had nicknamed a military vehicle “the Huthi.” They had first seen it used by the Yemeni rebel group locked in conflict with Saudi troops, and the name stuck.

My time in Tal Afar – 12 days embedded with the Hashed in the middle of the desert in August 2017 – wasn’t easy. Temperatures reached 50 degrees Celsius. There was no air conditioning. There was no water to bathe. 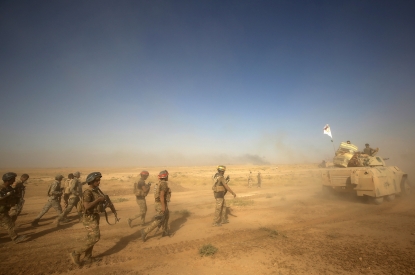 Fighters of the Hashed Al-Shaabi advance towards the town of Tal Afar, west of Mosul, after the Iraqi government announced the beginning of the operation to retake it from the control of the Islamic State (IS) group on August 22, 2017 (AFP / Ahmad Al-rubaye)

But that made our first shower – taken by melting ice cubes from an ice factory in a big water tank using only the sun's heat – all the more memorable. I drank more 'Ayran', a yoghurt-based drink popular in the Middle East, and ate more cucumbers than I ever have in my life, just in an attempt to cool off.

The Hashed was advancing on the heart of Tal Afar in the battle against IS, and I with them. One day, we reached a small lake and didn’t think twice before jumping in. Suddenly, we heard the call to prayer ring out from a local mosque. The Hashed fighters froze.

A single line in the nasal chant could tell the difference between a Shiite-run mosque – seen as friendly – or a Sunni-run mosque that may be harboring IS fighters. The Hashed fighters looked at each other in terror, until the muezzin mentioned Ali, the Prophet Mohammad’s son-in-law and a revered figure in Shiite Islam. They relaxed. “Now we’re sure we liberated Tal Afar,” one of them said. Iraq can’t go long without being in the international spotlight.

Just a few months later in September 2017, as Iraqi Kurds were holding a referendum on independence from the rest of the country, I found myself in Kirkuk. Kirkuk is disputed territory and oil-rich, claimed both by the autonomous Kurds in the north and the federal forces of the south. The late Iraqi president, Jalal Talabani, used to call it “the Jerusalem of Kurdistan.” 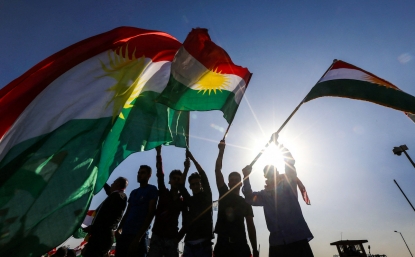 Iraqi Kurds wave flags of Iraqi Kurdistan during a demonstration outside the UN Office in Arbil, the capital of the autonomous region, on October 21, 2017, protesting against the escalating crisis with Baghdad. (AFP / Safin Hamed)

It was September 21, the day of the referendum, and I was scared. Tensions were high in the city. It felt as if war between Kurdish and federal forces could ignite at any moment. If either side sensed I supported the other, I could be arrested – or worse. I came up with a Lebanese name that couldn’t be attributed to any sect or region, and therefore felt safer.

Less than a year later, I was covering mass protests against then-prime minister Haider al-Abadi in Basra. I remember the time because it coincided with the 2018 football World Cup. The government imposed an internet blackout across Iraq in an attempt to stamp out protests, but it mostly meant I couldn’t file my stories or watch the matches. 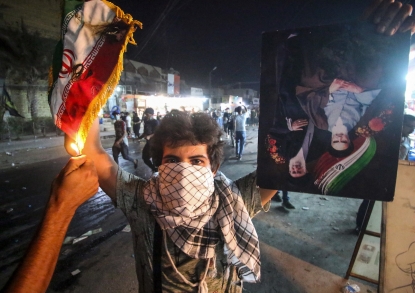 An Iraqi protester holds up an Iranian flag as another sets it on fire for him, next to a portrait depicting Iran's former and current Supreme Leaders Ayatollah Khomeini and Khamenei, during demonstrations against the government and the lack of basic services in Basra on September 7, 2018. (AFP / Haidar Mohammed Ali)

France won the final, and Abadi lost the premiership.

In October 2019, I was at it again. Massive, youth-dominated protests had erupted in Baghdad and across Iraq’s south. The chants were clever, brave, loud: “We want a homeland.” Had they continued, I’m sure those rallies could have transformed Iraq’s political and social future. 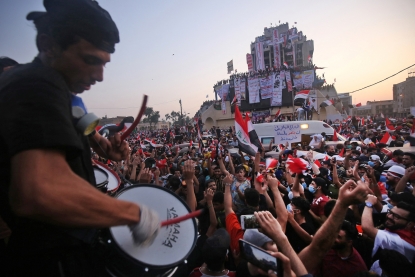 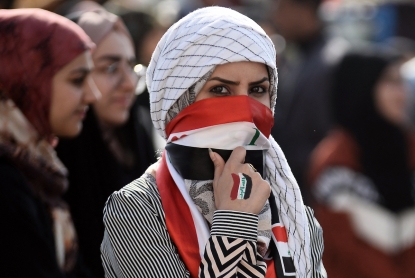 An Iraqi student takes part in an anti-government demonstration in the central city of Najaf on December 11, 2019. (AFP / Haidar Hamdani)

But they were extinguished by dark days and big guns. Threats, attacks, kidnappings. More than 600 dead and 20,000 wounded – with no accountability for the violence still to this day. 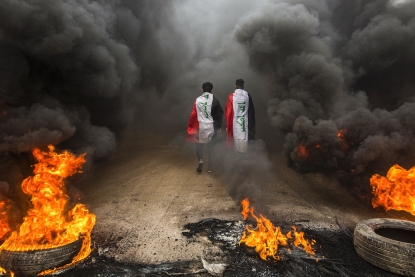 Anti-government protesters in the southern city of Basra on November 17, 2019 (AFP / Hussein Faleh) 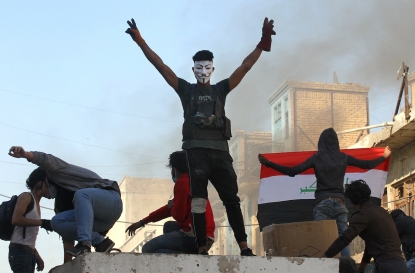 And by January 2020, it was a different ballgame. A US drone strike killed Qasem Soleimani, Iran's most storied military commander and his Iraqi lieutenant, Abu Mahdi al-Muhandis, a senior Hashed commander. Tensions soared and we hunkered down in our bureau, thinking 2020 would bring us World War III. Little did we know that it would be a global pandemic instead.

By spring, the Baghdad international airport where Soleimani was killed was sealed off. Iraq was on full lockdown in a bid to stop the spread of Covid-19. I was stuck in Baghdad, living day and night with my expatriate colleagues in our home-office. 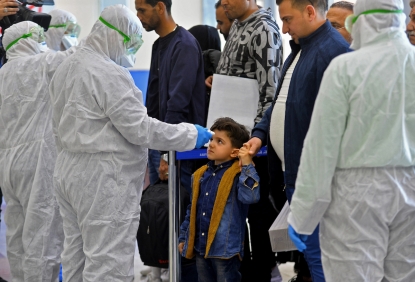 Baghdad’s journalists knew each other well already. But enforced lockdowns made us family. I cooked constantly, perfecting my skills in the kitchen to the joy of my colleagues and roommates.

Mustafa, who works for the Washington Post in Baghdad, was often over for dinner. But he had a bone to pick with me. “Here in Baghdad, we’ve got a square named after Beirut. Why isn’t there a Baghdad Square in Beirut?” he’d insist.

I don’t know why such small moments are preserved in my memory of Baghdad. Or the poem, “The sun is my sun, Iraq is my Iraq,” which was harmonized and served as the dial tone for a top commander in Iraq’s armed forces. Every journalist I knew could hum it by heart. 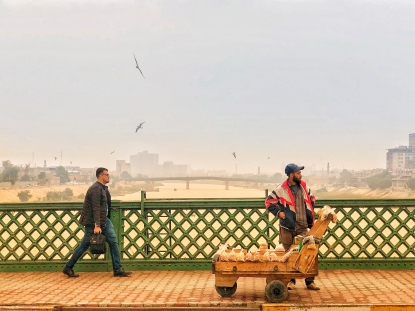 Or “Abu Jassem,” the Arabic nickname for Japan’s former ambassador to Iraq, beloved for speaking the local dialect. Or how then prime minister Adel Abdel Mahdi tried to chat in Lebanese slang with me when he found out I was from Lebanon.

My name and my nationality constantly opened doors for me in Baghdad. But in many ways, I also became Iraqi. I can’t stop saying “khosh,” or Iraqi slang for “good.” Neither can I let go of “tetdallal,” a sweet way of saying “I’m at your service.”

As I prepared to leave Iraq, I expected the country to leave a complex but overall pleasant taste in my mouth. Three weeks before my tenure ended, a rain of bullets killed the renowned scholar, the respected advisor, our dear friend Hisham al-Hashemi. 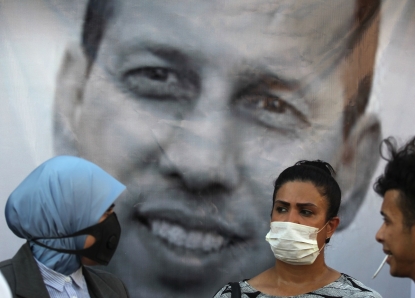 Iraq had been magical. Some of that magic vanished when Hisham was taken from us, but a country like this retains centuries of mysticism. If you lived in it, it lives in you, planting in your heart a question that will forever haunt you: “When will you return?” 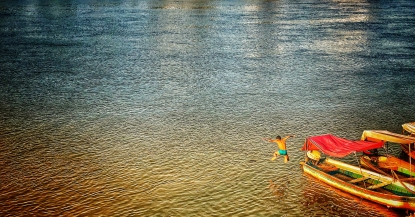 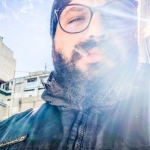 Deputy head of the Arabic Sport desk, based in Beyrouth
All posts 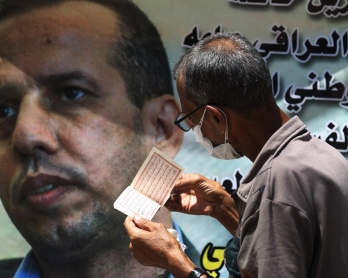 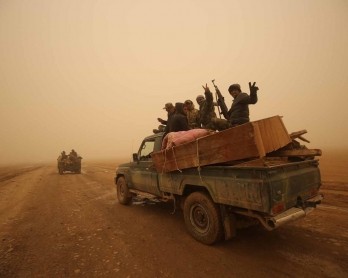 The past we step into