It’s a normal night in my hometown Baghdad: I’m in my living room, reading through streams of messages popping up on Whatsapp. I run a group where dozens of journalists and researchers exchange tips and rumors, and I keep an eye on it throughout the day. My good friend Hisham al-Hashemi, a scholar on jihadist groups and one of the finest political commentators in Iraq, often intervenes to clarify or deny the allegations sent there.

Tonight, his name lights up my screen – but it’s not a message from him. It’s about him.

One after the other, the messages across various Whatsapp groups say Hisham just died. I don’t believe what I’m seeing – I don’t want to believe it. It’s a bad joke, a misunderstanding, another fabrication in Iraq’s notorious rumor mill.

But within minutes, the Ministry of Interior confirms this nightmare is reality: Hisham al-Hashemi, 47, father to four children, razor-sharp researcher, advisor to men in tailored suits and military fatigues, television commentator, mentor to young civil society activists, priceless resource to journalists and my good friend, was just assassinated with a hail of bullets to his head, right outside his home.

Despite the official confirmation, I need to see it for myself. I jump in my car and zip across a few neighbourhoods to his home in a quiet Baghdad district.

Not tonight. The street is teeming with men in uniform. I push through them, blinking through hot tears, to see his car. Its driver’s window is shattered, shards of glass stabbing the pool of blood on the pavement.

Only then does it sink in. 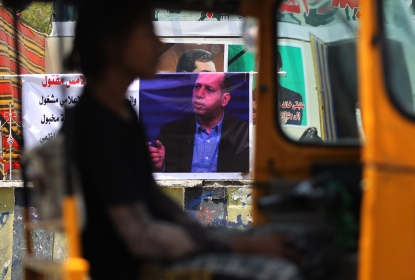 A youth sits in a tuk-tuk near the poster of slain Iraqi jihadism expert Hisham al-Hashemi, who was shot outside his house two days prior, in the capital Baghdad's central Tahrir Square on July 8 2020. (AFP / Ahmad Al-rubaye)

Rewind to October 2019, a turning point for Iraq’s modern history. Our country had climbed its way out of the Islamic State group’s grip less than two years ago, only to be caught in the tug-of-war between our two main allies, Iran and the US.

But Iraqi youth rejected this tired paradigm and took to Baghdad’s Tahrir Square and to streets across the south in an unprecedented uprising.

Their motto? “We want a homeland,” not led by the traditional political elite, free of external influence and focused on the wellbeing of the Iraqi people.

But the price they would pay for expressing such aspirations was higher than any of us expected. During the long months of anti-government protests, several dozen activists were assassinated. 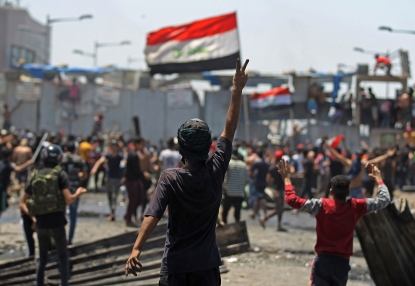 An Iraqi protester gestures the victory sign as some clash with security forces on Al-Jumhuriyah bridge in the capital Baghdad, during an anti-government demonstration on May 10,2020. (AFP / Ahmad Al-rubaye)

Their killings followed a sick formula: masked men on motorcycles shoot at the protesters as they leave the rallies or return home. CCTV footage is leaked to the media within minutes. Security forces pledge to find the perpetrators. Then… nothing.

For many of us, it was deja vu. The dark years of Iraq’s civil war and sectarian conflict -- from 2006 to 2009 – saw politicians, clerics, activists and businessman killed every week. Like all Iraqis, I lost relatives, friends, colleagues and contacts in that bloody melee. I had hoped such violence was a relic of the past but now, I fear the worst of Iraq’s recent history is returning.

Hisham, who publicly backed the rallies when most public figures were too afraid to criticize the government, ultimately shared the same fate as the young activists: cut down in an instant, in the obscurity of night. Looking at his car, I am overwhelmed with memories.

I cannot count the number of times I’d gotten in this car with Hisham, cruising around Baghdad between meetings. Each time, we debated the latest developments in Iraq, taking joy in listening to each other’s analysis even if our country rarely inspires optimism.

Hisham loved Iraq. He had a singular focus: pulling his country out of the economic, political and security crises it was in. Often, we’d drive early in the morning to a low-key restaurant for breakfast with friends, journalists, experts or government officials, analyzing developments over the traditional Iraqi fare -- omelets of ground beef and tomatoes, bowls of broad beans soaked in fat.

He’d jump up before any of us were done eating, excited to get to the first of a half-dozen meetings set up for the day. We would reconnect in the afternoon over glasses of hot, dark, sugary tea and puffs of smoke from narghileh pipes. I remember we could barely get through a few minutes of discussion before something would interrupt us: Iraqis passing by to salute “Dr. Hisham,” or asking him for his analysis on the latest political machinations, or a phone call from a top official. He never said no, glad to share his informed optimism that Iraq really could become better.

Tonight, the hope we shared in his car has been brutally replaced by grief and an icy dread. The dread that comes with knowing three men on motorcycles waited for Hisham to come home, smashed his car window with a rain of bullets, ended the life of a man who had earned the respect of all -– including Prime Minister Mustafa al-Kadhemi –- and calmly got back on their motorcycles and zipped away.

That is the Iraq that killed Hisham, so far from the one we thought we knew during our front-seat discussions. Hisham al-Hashemi at a cafe in Baghdad. (Photo courtesy of Ammar Karim)

He had a hint, I think. Hisham counted as many enemies as he had friends. Sunni jihadist groups hated him for advising foreign governments and the US-led coalition on IS, helping them squeeze its sleeper cells even after the “caliphate” had been defeated. Pro-Iran militant groups in Iraq despised him too: they could not stand his constant push for a strong Iraqi state that could shrug off their stranglehold on government institutions.

Hisham was endlessly accused of being in the pocket of Iraq’s president, or the US embassy, or British intelligence – but those who knew him did not doubt his fierce independence.

He had a signature toothy smile, boyish dimpled chin and twinkling, mischievous eyes that always hinted he knew more than he was telling.

Asked about the fabricated accusations and threats against him, he’d grin and reply softly: “maktoob,” or “It is written” in Arabic -- an Islamic belief that God has already set out each of our fates, no matter how we try to fight it here on earth. 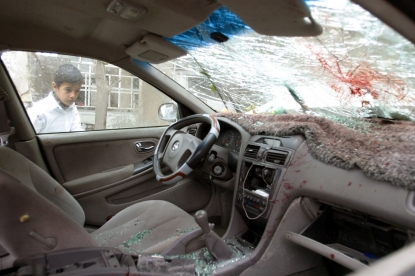 Hisham’s generosity made him famous, beloved, and respected. He always had time for young academics looking for tips on conducting research, or for protesters seeking advice on political maneuvers. He spent long hours every day in meetings with rivals, from presidential advisors and politicians to shadowy militiamen. He patiently answered every question by local and international journalists, guiding us to a better understanding of Iraq.

His unparalleled network allowed him to intervene on multiple occasions to secure the release of activists detained by state-sponsored armed groups or even resolve disputes among armed factions before they got bloody.

Iraqi or foreign, diplomat or journalist, if you wanted to know Iraq, you had to know Hisham. Many of his associates and contacts have already written of the enormous gap in research and reporting on Iraq that will be left by his killing.

But his absence will mean much more than that. To his family and close friends, he was Abu Issa -- “Father of Issa,” his eldest son. He was a loving father to his three sons Issa, Musa and Ahmed -- whose names translate to Jesus, Moses and another moniker for the Prophet Mohammed – and his daughter Khadija. He worked tirelessly to provide for them and their mother, in their modest home in central Baghdad, and cared just as much for his brothers, who lived nearby. Hisham al-Hashemi in one of his many television appearances. (Photo courtesy of Ammar Karim)

At condolences at their family home, Hisham’s grieving brothers and young nephews praised his principles. He refused to use his connections in the government to get them employed or out of trouble, insisting he’d stay clean in a country ranked the 16th most corrupt in the world.

I saw these principles at work often, most recently at Baghdad’s immigration office a few months ago.

I had stumbled across a Nigerian woman who had suddenly been fired from her job as a housemaid, thereby losing her work visa just as the coronavirus pandemic was taking hold. She was being forced to pay for her ticket back home, thousands of dollars she could not afford.

I took to Whatsapp, broadcasting an appeal for donations across different groups and forums where journalists and experts exchanged ideas. Hisham was the first to respond, sending a private message and discreetly coming to meet me later to hand me a wad of cash.

“God grants us wealth so we can share it with those in need,” he said simply.

That’s who Hisham was. One of the finest, most principled men I have ever known, whose honesty and dedication to struck fear in the hearts of Iraq’s masked, armed boogeymen. Hisham, actually, was the one who threatened them – every time he expertly unraveled their propaganda, helping security agencies identify the men behind the masks, or coaching researchers looking to make Iraq a more transparent place, or assisting activists working for a freer future in their broken homeland.

I am still haunted by the horror of the night he died. But his killing could not have been anything but an enormity, for someone who loomed as large as Iraq.

This blog was translated into English by Maya Gebeily in Baghdad. 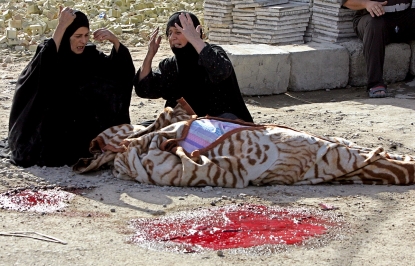