Unstad, Norway -- It’s an addiction. It’s not even that you want to come back. You need to come back. Cold is like that. You become hooked, like a junkie. And this is the only reasonable place to get your high (it takes too long to get to the others). So this year, I decided to take portraits of other addicts like me. Because for once, it got really cold. 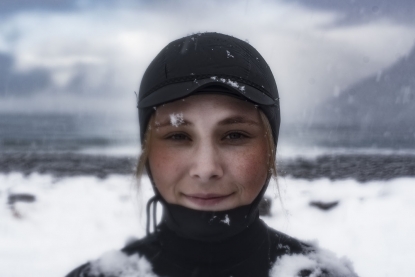 Solmoy Austbo from Norway poses after a surf session, on March 11, 2018 in Unstad northern Norway, Lofoten islands, as air temperature dropped to minus 13°C and water temperature above 4°C. (AFP / Olivier Morin) Leela Krischna from India poses after a surf session, on March 11, 2018 in Unstad northern Norway, Lofoten islands, within the Arctic Circle as air temperature dropped to minus 13°C, with water temperature at plus 4°C. (AFP / Olivier Morin)

Every sport has its hook and I guess for surfing, it’s the simplicity and the water. You don’t need a lot of equipment -- just your board and a bathing suit. And the water just washes away everything that’s in your head. When you’re in the water, you just forget about everything else.

I started surfing and windsurfing when I was a teenager, in the southwest of France where I grew up. I discovered cold twenty years ago, when I met my wife. She is Finnish and comes from the ‘big north.’ So I discovered the ‘big cold.’ And just how addictive it can be. I would go walking on the frozen sea in the winter. The temperature would be around minus 15 Celsius and I would just get into a zone and before I knew it, I’d be 10 kilometers from shore. Cold is really therapeutic. You forget about absolutely everything...

Cold is really therapeutic. You forget about absolutely everything. You just evacuate everything.

So I guess it was inevitable that eventually those two loves -- the surfing and the cold -- would come together. And Unstad, at Lofoten Islands above the Arctic Circle, was the perfect place to marry the two. 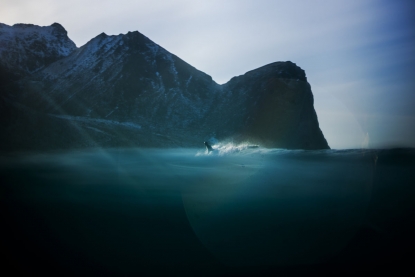 I first heard about it when I read in a surf magazine that Tom Curren, the former Californian world champion in the 1980s, went surfing there. Intrigued, I made a mental note to check it out.

If you want to surf in cold weather, Unstad, high above the Arctic Circle in Norway, is basically the only spot in the world that’s easily accessible. It takes me about six-seven hours to get there from Paris, where I am based -- a flight from Paris to Oslo, then a flight to Bado, then a flight in a smaller propeller plane to Leknes, which is 20 kilometers from Unstad.

There are other cold spots where you can surf of course -- Alaska, Kamchatka -- but they are very remote. It would take days to reach them. This year, however, was different. That cold blast that gripped much of Europe in late February and early March? It reached all the way up here, too, so the temperatures dropped to minus 15C. Plus there was the wind. With the windchill, it felt like minus 25C. Now that’s extreme surfing. A surfer carries his surfboard as he walks through the snow out of the water on March 11, 2018 in Unstad, northern Norway, Lofoten islands. (AFP / Olivier Morin)

Just how extreme? The car was about 50 meters away. By the time you walked from the water to the car, you could feel your wetsuit start to stiffen up and freeze. Then you had to take it off outside (because it’s impossible to take a thick, stiff wetsuit off inside a car), put some dry clothes on, jump into the vehicle and crank up the heat. And then wait for your body to come back to life. Emilie Klerud from Norway stands in a bucket of warm water as she takes off her wetsuit after a surfing session, on March 11, 2018, in Unstad. (AFP / Olivier Morin)

Because of the cold, your body uses more energy, so at the end of the day, you're spent. Much more tired than if you had been surfing in warm waters like Hawaii. You’re exhausted, you’re fed up, you just feel soft on the inside, you collapse into your bed. And yet in the morning, you’re just ready to go again.

One hour in Unstad and I feel like I've been on holidays for two weeks...

Why do it? Because once you’re there, you just forget about absolutely everything. One hour in Unstad and I feel like I’ve been on holidays for two weeks. Make no mistake -- compared to warm-water surfing, it’s more suffering, it’s more difficult, it’s more preparation (instead of just a bathing suit, you have a thick wetsuit, booties, and, in my case when I shoot, fins to move fast in what is often a strong current). Your body suffers. You struggle against the cold. You get so tired. And yet there is so much pleasure in it. It’s not masochism, not at all. It’s just that it’s really like a drug. 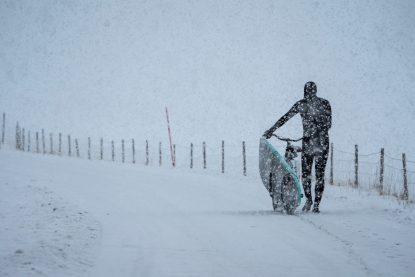 As the snow falls... a surfer carries his board on a bicycle under a heavy snowfall on March 11, 2018. (AFP / Olivier Morin)

It’s just such a huge pleasure. And of course the surroundings only add to the magic. Unstad is surrounded by mountains. So in addition to the physical challenge, you’re surfing in just a mind-blowing beautiful place. It’s not that busy -- this year, the busiest day was my last one there, with just 20-25 people in the water. Then of course, there are the Northern Lights. I mean, what can top that as part of the scenery? And there are the moments that you can only get in a remote place like this. For example, one night, I was trying to take some night photos in the water. We were waiting for the Northern Lights and there was a fierce wind. Before putting on our wetsuits and going into the water, we made a fire on the beach, put some salmon with paprika and onions into foil and cooked it on the flames. It tasted soooo good. It wasn't just the quality of the fish, but the surroundings. The whole package. It's just one of those memories that'll stay with you. 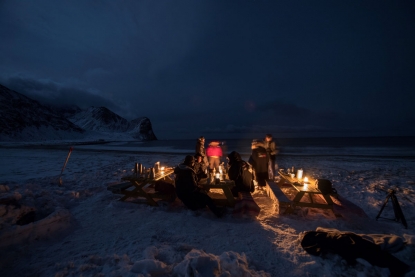 Surfers rest in front of a camp fire after an evening of surfing in Unstad along the northern Atlantic Ocean on March 12, 2017. (AFP / Olivier Morin)

The idea for the portraits came because I wanted to tell the story of surfing as a lifestyle. It’s not just me who thinks this way, there are others as addicted to this place as I am. You don't have to live in Hawaii or California for surfing to be your life. It can be your life here, too. 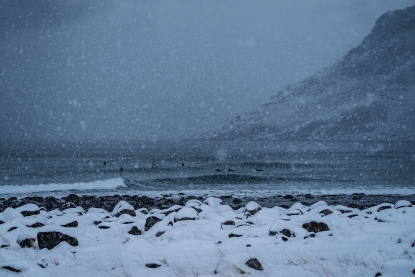 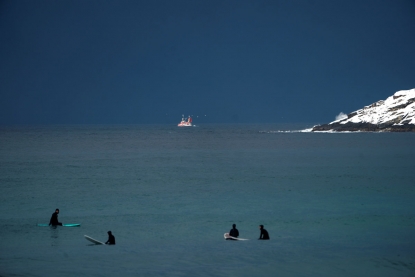 The portraits turned out really nicely. It was probably one of the most natural assignments that I have shot. Everyone was enthusiastic and nice and very natural. And, like me, they all have their reasons for loving to surf in this special place.

Ellen Holgersen, 32, veterinarian: “I prefer the cold water surf, that's why I moved here. I tried living in places where you can surf just outside your doorstep but it was like going to the gym for me, a lot of people and too simple. Here it's more of an expedition because of the cold.” 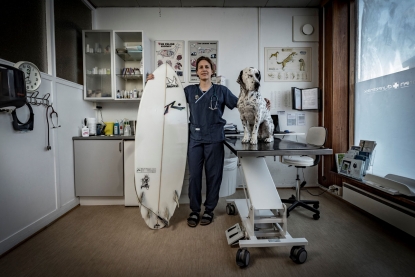 Ellen Holgersen, 32, veterinarian, poses on March 7, 2018, in Svolvaer, northern Norway, Lofoten islands, where she moved a year ago. "My whole life I have been moving and taking my education wherever I can surf. Living here in Lofoten has been a dream for a long time because it combines my passion for surfing and the mountains. I prefer the cold water surf, that's why I moved here. I tried living in places where you can surf just on your doorstep but it was like going to the gym for me, a lot of people and too simple. Here it's more of an expedition because of the cold. I love the feeling that you come up from the ocean and you're just freaking cold. You have to change really quickly and then put your feet in a bowl of hot water, in front of the fireplace. Also we have nice clear days, not too many people out and the beautiful scenery, it's the whole package. I enjoy it more than Bali or the south of Europe." (AFP / Olivier Morin)

Lisa Blom, 38, hotel manager: “Lofoten is like a big playground for grownups…. Surfing is life. It's a must. It's the same for me as breathing, eating, sleeping, being with my family. There are quality waves here, they're consistent. When you're not surfing there are heaps of other things you can do -- hike, ski, kayak, stand-up paddle, fish... ” 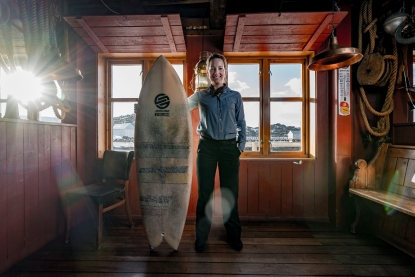 Lisa Blom, 38, from Sweden, a hotel manager in Kabelvag, poses on March 7, 2018, in Svolvaer, northern Norway, Lofoten islands. "Surfing is life. It's a must. It's the same for me as breathing, eating, sleeping, being with my family. There are quality waves here, they're consistent. When you're not surfing there are heaps of other things you can do, hike, ski, kayak, stand-up paddle, fish... Lofoten is like a big playground for grownups. Winter surfing is best because the waves are usually bigger but during the summertime (when the light never goes out), the social scene is fantastic, hanging out on the beach and camping..." (AFP / Olivier Morin)

Ole Kristian Fjelltun-Larsen, 34, coffee shop and B&B owner: “Winter is more challenging, it’s like an extreme form of meditation, with an extreme contact with nature.” 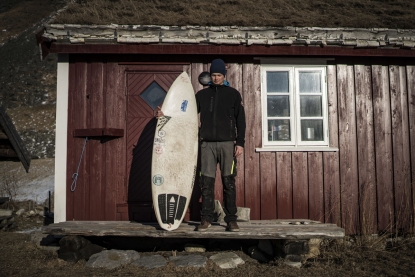 Ole Kristian Fjelltun-Larsen, 34, a coffeeshop and B&B owner, poses on March 8, 2018, in Unstad, northern Norway, Lofoten islands. "Surfing to me is relaxing and good exercise. The weather doesn't bother me that much. When it's warm, it's very different. Winter is more challenging, it's like an extreme form of meditation, with an extreme contact with nature. In winter, you get very tired physically, the body uses a lot of energy to keep warm, but your head gets really relaxed, you forget about stuff, you calm down and big problems become smaller problems. The feeling when you're done is really good. You rush to the beach in your car to get there, you drive too fast and when you go home, you're driving too slow." (AFP / Olivier Morin)

Nils Nilsen, 26, an employee at a fishing factory: “Surfing to me is peace of mind, quiet inside my head. One focus, that’s it.” 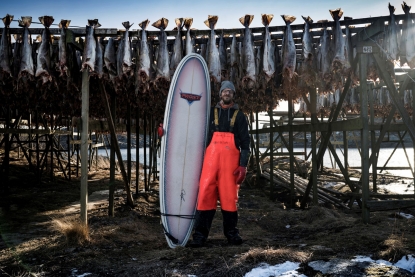 Nils Nilsen, 26, an employee in a fishing factory, poses on March 6, 2018, front of arctic cod in Henningsvaer, northern Norway, Lofoten islands. "Surfing to me is peace of mind, quiet inside my head. One focus, that's it. Of course it's challenging yourself, I guess. Whatever the season, if I have the time, I'm in the water. I have been to Portugal a couple of times, up and down the coast." (AFP / Olivier Morin)

Unstad is another planet, another world. It’s just completely zen here. I think this very northern atmosphere makes it like that. You get the same vibe in Lapland.

When you’re out here, you’re not the same anymore. You know you’re way up north and there is less of everything -- people, tourists, hikers. But more of that special feeling that you get with the cold. I guess you can call it the Arctic spirit. 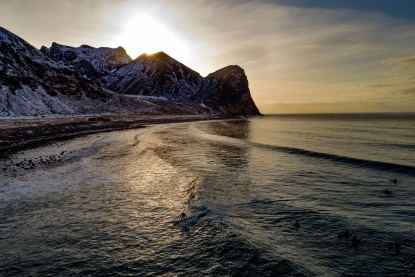 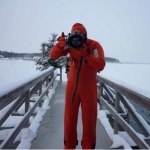 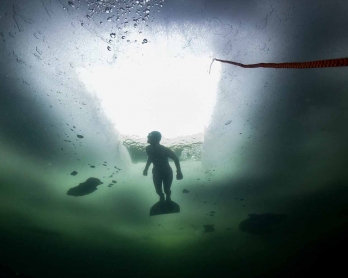 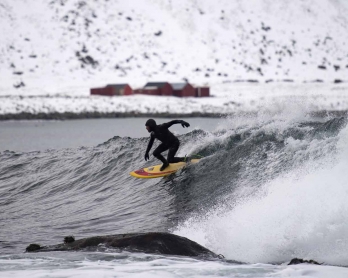 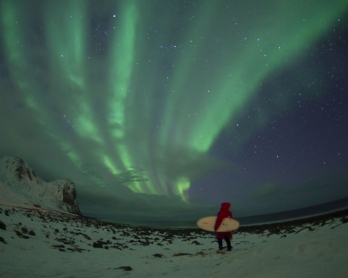