Zimbabwe's 'end of an error'

Johannesburg -- I had just stepped out of the shower, wrapped in a bath towel and my hair dripping, when the sound on my cell phone filled me with dread. The ringtone signalled that messages were pouring into a WhatsApp group that was usually very quiet. One glance at the screen confirmed it -- "this death is going to happen exactly the way I had been hoping to avoid," I thought before frantically starting a long flurry of calls.

The death in question was that of Robert Mugabe, the liberator-turned-despot founding father of independent Zimbabwe, where I was born and raised. As a Zimbabwean and a journalist who has been working in the region for more than 20 years, Mugabe has been a fixture of my life. I started my journalism career when he had already been in power for a decade. 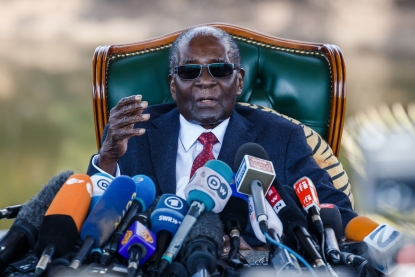 Robert Mugabe addresses a surprise press conference on July 29, 2018, on the even of the country's first election a year after he was ousted from office. (AFP / Jekesai Njikizana)

The death of a major figure like Mugabe is something journalists like me prepare for, especially if the figure is getting on in years. Obituaries and angled stories prepared well in advance were dusted off and refreshed every time he went abroad for medical treatment.

Turned out I was wrong.

While I was in that shower, our fact-checker alerted us that there were murmurs on social media that Mugabe, 95, had died in Singapore where he often went for medical treatment. By the time I stepped out of my bath, our office WhatsApp group dedicated to news of him and that had been very quiet for months, was crackling with messages like a popcorn maker. I began frantically dialling, trying to confirm the passing.

I got through to two of his close associates, who told me that he was dead, but refused to go on the record. You can’t announce someone’s death based on unnamed sources, so I kept trying. In between the phone calls and texts to officials and his family, and calls from the editor on duty in Paris, my colleague who was already in the bureau saw the tweet from Mugabe’s successor, announcing the news.

The story was out. I could finally leave my house and got to the office, beating the Johannesburg morning rush traffic. As I prepared to fly to Harare, I was struck by the fact that there was hardly any public reaction back home to the death. Aside messages of condolences from prominent faces and tweets from some individual Zimbabweans, no-one seemed to publicly mourn the passing of the founding father of independent Zimbabwe.

Maybe too early, I thought.

I landed in Harare early evening. The city was going about its business as if nothing had happened. Supermarkets, bars and nightclubs were open, I got stuck in the early evening traffic gridlocks of downtown Harare while driving from the airport. There was no outpouring of emotion on the main streets of the capital. State TV ran programmes devoted to him, but other  TV programming went ahead as scheduled.

Tomorrow, I thought to myself. Tomorrow I’ll find some outpouring of grief… or relief…. or something.

The next day I walked around the streets for hours, but the only sign that I could see that there had been a death of a prominent person was the flags that flew at half mast. No-one -- not even top government officials --seemed to have cancelled their planned Saturday parties or weddings. It was business as usual. 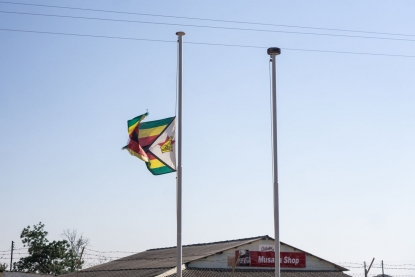 A Zimbabwe flag flies at half mast on September 16, 2019 in Murombedzi township, Zvimba district, a week after Robert Mugabe's death. (AFP / Zinyange Auntony)

The majority of Zimbabweans -- who are bearing the brunt of  Mugabe's economic legacy that saw one of Africa’s most prosperous countries dive into ruin -- were too busy with the daily grind of trying to put food on the table. One of the many people I spoke to said he’d be happy to toast to the death but was too broke to afford even a pint of beer, let alone champagne.

I found that most people couldn’t care less that he had died. As one colleague commented immediately afterward -- Mugabe’s death was an “end of an error.” 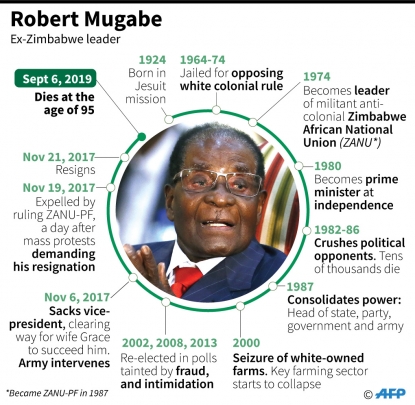 I myself had mixed feelings. On the one hand, I could understand the barely lukewarm reaction from ordinary Zimbabweans to his death. On the other hand, I had been preparing for this death for years and this was turning out to be….. quite anticlimactic.

The main memorial service was held at the giant China-built National Sports Stadium in Harare. But it was barely half full. I expected a bit more people. 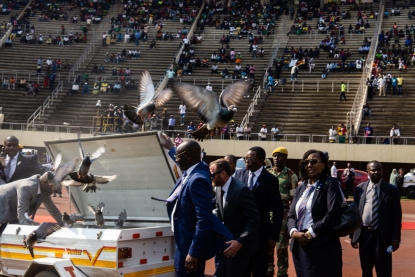 The few who did attend were very vocal, as they reminisced about the bad Mugabe days, but insisted that those were better than the ones under his successor. Another group chanted pro-opposition slogans from the bleachers.

But while the whole scene was anticlimactic, it didn’t lack for drama.

Mugabe's family started off by snubbing the government, saying they wanted him buried in his natal village in Zvimba, since he was the paramount tribal chief there. Eventually, they gave in and agreed that Mugabe would be buried at the National Heroes Acre, a shrine in the capital, where he himself had presided over dozens of funerals of independence war guerrillas.

I vividly remember how livid he would get at each eulogy or in his annual heroes commemorative speeches - launching blistering attacks on his political opponents, activists and Western governments. His speeches were generally lively, but he got especially animated whenever he spoke at the Heroes Acre.

"Those who were hurt by defeat can go hang if they so wish. If they die, even dogs will not sniff at their corpses. Never will we go back on our victory. We are delivering democracy on a platter. We say take it or leave it!” he shouted, in remarks aimed at his then opponent Morgan Tsvangirai, weeks after the 2013 disputed elections, the last ones he contested. During the next elections five years later, after having been toppled from power, he was bitter, vowing to vote for the opposition rather than for the people who “tormented” me. He took his bitterness to the grave. 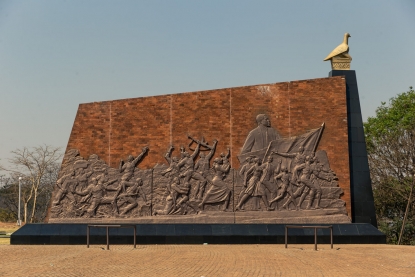 A mural at the National Heroes Acre monument in Harare shows Robert Mugabe as the Great Leader taking his people to freedom, September 12, 2019. (AFP / Jekesai Njikizana) 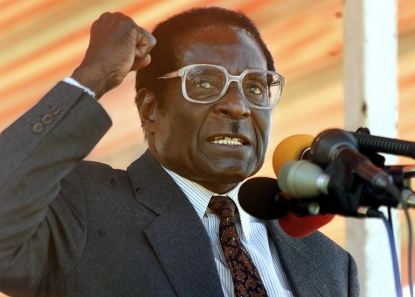 Zimbabwean President Robert Mugabe at a rally in a suburb of Harare, June 17, 2000. (AFP / Odd Andersen)

His funeral didn’t take place until three weeks after his death, a rather long wait to bury the dead in Zimbabwe, where funeral vigils last on average three days. During those weeks, his body was never kept in a morgue, but either at his Harare house or the rural Zvimba village, waiting for the construction of a special monument that the government had hoped to turn into a tourist attraction.

But that was not to be. Shortly after construction of the monument began, there came a surprise announcement -- Mugabe would be buried at a private ceremony in his home village after all. His family argued that Mugabe had not wanted to be buried in Heroes Acre because he had been ridiculed by his onetime allies. So the founder of Zimbabwe was laid to rest without a red carpet ceremony or an expensive casket and a heavily fortified grave. 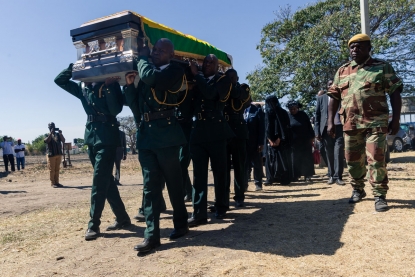 The coffin of former president of Zimbabwe Robert Mugabe arrives for his burial at his home village in Kutama, on 28 September 2019. (AFP / Jekesai Njikizana)

The ceremony, in the courtyard of his rural home, could have easily passed for that of an ordinary Zimbabwean -- a couple of hundred mourners, none of them senior government officials. Defense Minister Oppah Muchinguri Kashiri later said “it was sad” that he had been buried in a private lot that members of the public were unlikely to ever access.

I had came to Harare expecting to see vivid emotion and to bury the man who set Zimbabwe free and then drove its economy and freedoms into the ground. Three weeks later, I left a country that didn’t really care and funeralled-out from all the machinations about his burial.

He may be gone, a little forgotten, but Zimbabweans are still waiting to shake off the legacy of the economy that he drove into the ground and that his successor appears to be struggling to revive.

It may be a long wait. 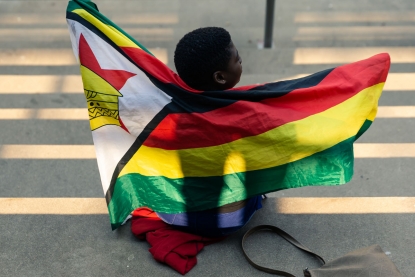 A child holds a Zimbabwe's national flag as he sits at the National Sports stadium where the official funeral for Robert Mugabe is to be held in Harare, on September 14, 2019. (AFP / Jekesai Njikizana) Journalist based in Johannesburg.
All posts 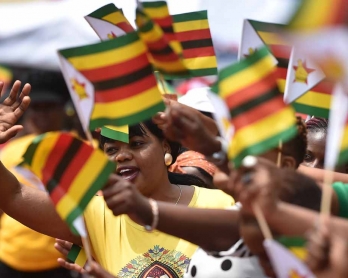 Proud of Zimbabwe at last 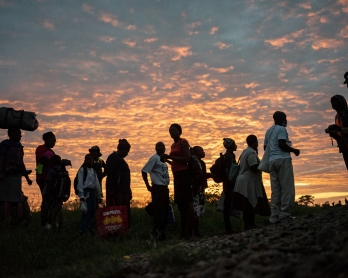 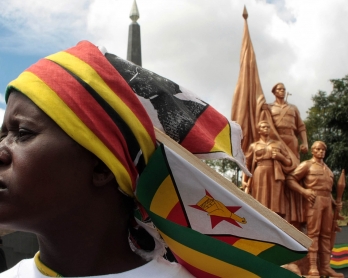 Stuck on pause in Zimbabwe

Mad days in the court of King Donald

China then and now