Rada. She was the first person who came to mind.

My colleagues and I wanted to profile Afghan women who had conquered all through their force of nature, and who stood to lose everything if the Taliban swept back to power. Rada exemplified exactly that: a strong personality, headstrong even, uncompromising, an artist, a woman’s activist and totally unflappable. 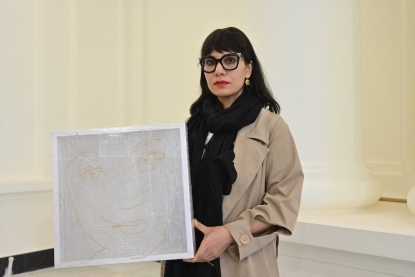 I had seen her cut down to size diplomats, colleagues and ‘experts’ who naively asked whether she was ‘really representative’ of Afghan women.

‘How could I be anything less?’ she’d retort with an imperious look. Left unsaid, but clearly implied was ‘what picture do you have imprinted on your brain? What box do you put Afghan women in?’

She asked if we could switch from an open phone line to the encrypted messaging service Signal. It took five hours of one-on-one talks and the intervention of mutual friends before she agreed to speak on camera. Rada was scared.

But this time, something had changed. To my surprise, she hesitated when I first called. She asked if we could switch from an open phone line to the encrypted messaging service Signal. It took five hours of one-on-one talks and the intervention of mutual friends before she agreed to speak on camera. Rada was scared.

Initially, I was overjoyed to return to Kabul for the first time in nearly three years, a city where I had lived and reported from 2016  to 2018. I was full of emotion, as the plane made its slow descent over the arid, dusty peaks and beige pleated sheets of the mountain ranges that rise up around Kabul. 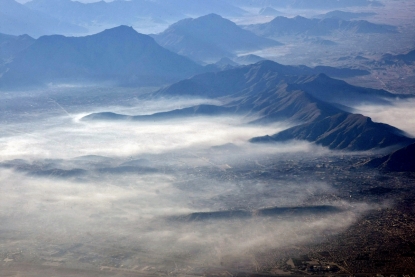 But the feverish joy of seeing old friends rapidly dissipated. People confided their fear and suffering. Gripped by uncertainty and terrified about what may lie ahead, people tried to imagine the future while planning for the worst. Those, who in late May still questioned whether they wanted to leave, were rapidly making plans by late June, hoping that they still had time to escape.

Since then, the Taliban have only gained ground. Details that filter out from districts they have seized, often with barely a fight as poorly motivated and often unpaid Afghan government troops simply desert, have only increased the terror in a country at large that feels abandoned by the rest of the world. Fighters with Afghanistan's Taliban militia stand with their weapons in Ahmad Aba district on the outskirts of Gardez, the capital of Paktia province, on July 18, 2017. (AFP / Faridullah Ahmadzai)

In cities especially, those who are educated, activists, thinkers, writers, protesters, are moving targets. Between September 2020 and May 2021, the authorities have reported 180 targeted assassinations of journalists, judges, lawyers, human rights and women’s rights activists. They have been shot dead or blown up by car bombs.

The NDS, the Afghan intelligence service, sometimes warn people who are ‘on the list’. Others receive threats -- night-time calls or ‘night notes’ little slips of paper left on doors – or feel followed.

Whether the threat is real or imagined, the result is the same: each potential target reduces their movements, abandons any form of routine, such as going to the gym, going out to dinner with friends… ‘I keep turning around, walking in the street,’ says the young director of a radio station that he runs from home since closing their offices last November.

The Taliban claim none of these assassinations. But to those who feel targeted, it is clear that the Islamist fighters are cleaning up before taking power. The authorities, who publish these statistics daily, have opened no investigations, nor promised to do so. 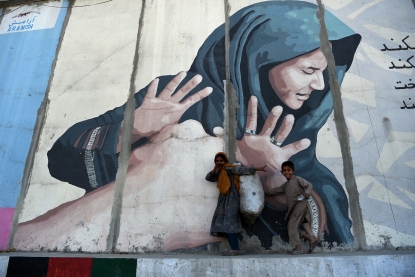 Children carrying a sack with garbage walk past a mural along a roadside in Kabul on September 22,2020. (AFP / Wakil Kohsar)

When I call Rada, I also contact other women, lecturers, researchers… ‘I really want to talk to you, but no pictures,’ they say. One of them was explicitly threatened on Twitter. Some say that they are ill or isolating– Covid is hitting hard at the moment. Others are already abroad and not sure they’ll return, even if they don’t say it.

Rada, again, hesitates. She has already had to leave behind pressing business and seek shelter, this winter, in a neighbouring country. She came back, despite everything, to finish preparations for her annual exhibition on March 8, international women’s day. But she made it an online event. ‘Organising a private viewing, as we did in the past, would have been too dangerous for guests,’ she explained. 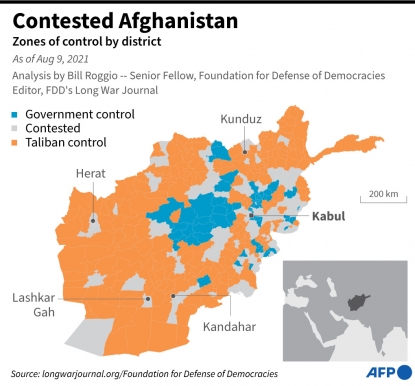 She limits her movements, hardly goes out, hardly sees friends and never sleeps more than two or three nights in the same place, and rarely at home. Her car stays in its garage. It could be used to identify her.

One of her best friends, Fatima, was the first to be assassinated in June 2020. She was on her way to work at the Afghanistan Independent Human Rights Commission when a bomb, placed under her car, killed her and her driver. Fatima, known as Natasha to her friends, was a queen of the proverbial dance floor. Just 24 years old, she had two masters and spoke five languages. She had just returned to Kabul after five years studying overseas.

After agreeing to an on-camera interview, Rada spent a long time hesitating over the location before opting for the house of a female friend: somewhere she felt safe but also ‘Afghan enough’ to convey the attachment she has to her country.

‘There is no guarantee of holding onto our rights.

Leaning against toshaks (the large cushions that line the floor of Afghan sitting rooms) she expressed her anger over the accelerated and unconditional nature of the US withdrawal that has imposed no demands on the Taliban. ‘There is no guarantee of holding onto our rights. This agreement is a betrayal that legitimizes the Taliban,’ she said. 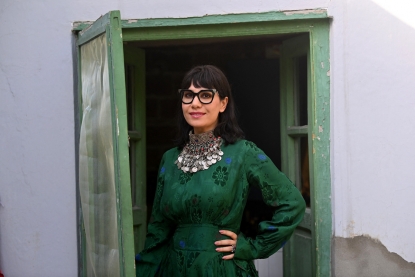 She spoke of queens throughout history, of architects and builders, the education that she and her sisters received with the blessing of their mother and father, despite their background in the rural north. Her independence, her achievements were won with their support.

‘Today, it’s difficult to keep hope. Every day could be the last. And it’s not only me, we all feel the same thing. What’s going to happen tomorrow, will I still be alive?’ 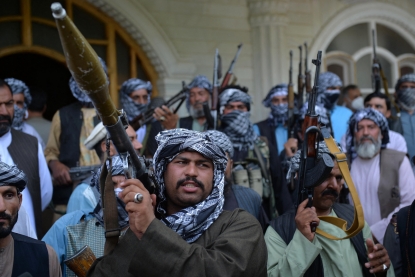 Armed men who support the Afghan army against the Taliban, in Herat, July 9, 2021. (AFP / Hoshang Hashimi)

To see her so shaken brought tears to my eyes. I started crying for the first time during an interview. It never happened before in my career, even in the worst situations. Behind the video camera, my colleague Justine stopped filming. Photographer Adek put down her camera. The despair of Rada had taken hold of the room and gave shape to those of Afghan women. Turkey refused her a visa. France, last we heard, was still an option. But before leaving, Rada wanted to put her work in storage. 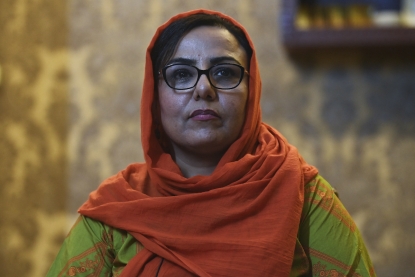 We met two other women for this series – Mary Akrami, who opened a shelter for women fleeing domestic abuse, and Laila Haidari, the ‘mother’ of drug addicts in Kabul to whom she offers a refuge, care and a life after drugs – also doubted their place in a future Afghanistan, if the country fell again into the hands of extremists. 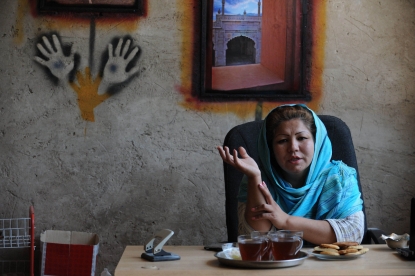 Some experts and observers like to believe that the Taliban have changed. But witnesses in the districts that have fallen back under their control contradict such optimism: women, forcibly banished behind the burqa, are forbidden from going out unaccompanied, without a marham – the term for a male relative who acts as a chaperon, girls schools are largely closed or reduced to a few classes for those aged under 12. A road in Arghandab district of Kandahar province on September 30, 2020. (AFP / Wakil Kohsar)

In the Taliban’s southern heartland, around their former bastion in Kandahar, Taliban fighters are settling bloody scores with government employees they consider traitors.

Rada, Mary, Laila tremble, and men with them. No one can today reassure them or assure them that night will not befall Afghanistan again. The only question, to be honest, is when. 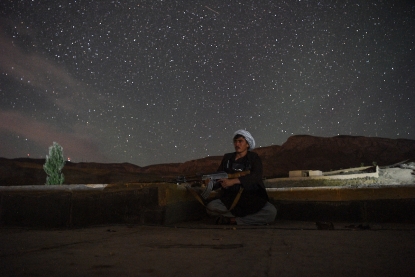 An Afghan militia fighter keeps watch at an outpost against Taliban insurgents at Charkint district in Balkh Province, on July 15, 2021. (AFP / Farshad Usyan) 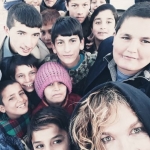 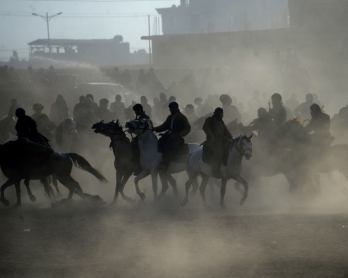 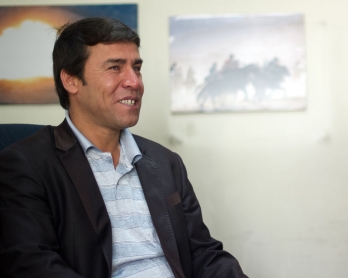