KABUL -- His milky eyes were the saddest that I have ever seen. Those eyes -- the eyes of a teenaged boy kept as a sex slave by a police commander in a godforsaken corner of southern Afghanistan -- screamed for help. In silence.

I found myself in that godforsaken corner because of an image.

Some months ago, I was struggling to stay awake at dawn after reporting another grisly all-night Taliban attack in Kabul’s diplomatic quarter. Slouched in my chair, groggy-eyed, I was poring over photographs by my talented Kabul bureau colleague Wakil Kohsar.

One of them jolted me wide awake — an Afghan soldier apparently kicking the mutilated body of one of the suicide attackers, his booted foot in mid-air, frozen in time. The surreal portrait captured the reactionary anger after a horrific spasm of violence. But it was something else about that picture that stayed with me — the bomber’s youth.

That image inspired this story on a teenage suicide bomber, a wannabe boxer captured alive in the southern province of Kandahar. His tale offered disturbing insight into how Afghanistan’s roiling conflict has regressed into a hidden war on children. In the fog of the conflict, horrible crimes are being perpetrated against children — by both warring parties.

And then I uncovered something even worse -- the widespread practice of holding child sex slaves by police in southern Uruzgan province and how the Taliban are using them as Trojan Horses to kill their abusers.

The custom of child sexual slavery — bacha bazi — is a centuries-old practice in Afghanistan, which US officials have called a culturally sanctioned form of male rape. The boys, typically aged between 10 and 18, are feminized, sometimes wearing makeup and bells on their feet. They are usually kidnapped or sold by their desperately poor families to the powerful elite — warlords, politicians and police commanders — who keep them for personal servitude, sexual pleasure and as a symbol of authority.

When I first stumbled upon this story through a well-connected source in Uruzgan, I didn’t believe it. Could the Taliban be infiltrating Western-funded Afghan police by exploiting their lust for boy sex slaves?  The war tactic is redolent of the Middle Ages. But as I started digging around, multiple sources began corroborating the story.

Reporting on the deeply sensitive subject was fraught with security risks as bacha bazi is largely practiced with impunity by powerful rogue policemen. Careful to not let them get wind of my investigation, I quietly beavered away for two months under the guise of researching other stories from Uruzgan, all the while secretly interviewing sources and gathering facts.

I was stunned by the sheer scale of the child abuse

Every time I pored through my reporter’s notebook, I was stunned by the sheer scale of the child abuse. Practically all of Uruzgan’s 370  local and national police checkpoints have boy slaves -- some up to four. Some commanders refuse to join an outpost unless there is a bacha there. Others threaten to leave if their bachas are taken away. Bachas have also prompted jealousy and gunfights between commanders. “The Taliban are not blind to notice that this addiction is worse than opium,” one provincial judge told me.

Reporting on this story was heartbreaking and one scene in particular I will never forget --  the sad, milky eyes of one child slave I encountered in the remote Uruzgan village of Dehjawze, a surreal netherworld.

At a checkpoint in the middle of a blooming opium farm, with caged birds and a rabid dog tethered to the entrance, the boy, with kohl-lined eyes and bleached blond curly hair, sat in a corner, quietly refilling tea glasses for the guests of the local police commander, who openly flaunted his “beautiful bacha”.

The commander, a hulking middle-aged man, made no effort to conceal that he had been forcibly holding the teenager for two years, speaking in a tone that made me sick: casual, vain, remorseless.

I was eager to talk to the boy, but the commander was watching over him like a hawk. I held back, careful not to add to his troubles. I’ve seen plenty of sad eyes in my reporting career, but none so sad. He was wordless but his silence was screaming for help.

There are many others like him, mute victims of bacha bazi. Many of their captors are so possessive, they won’t tolerate other men talking to them for fear that they might steal them away.

“Poor parents have come begging to us: ‘(Paedophilic) policemen are kidnapping our children. Do something! Stop them!’” a local official told me.

'Do you think police commanders will leave us alive if we probe their crimes?'

This official was so afraid to talk, he was speaking in a whisper in his own office: “Do you think police commanders will leave us alive if we probe their crimes?”

The most heartbreaking detail I discovered is that many local parents are afraid of dressing up their children, fearing they might get kidnapped by paedophiles. Their fear is a reflection of how deeply entrenched child abuse is and how the perpetrators largely have a free hand.

The victims are mostly “bacha bereesh” — boys without beards. A pervasive and perverted joke among local young men is that you step out of your home without a beard at your own peril.

Bizarrely, bacha bazi is neither considered as homosexual behaviour, which is popularly demonised as a deviant sexual act prohibited in Islam, nor as paedophilia.

The practice is so accepted culturally that during the course of my reporting, one local man asked me, only half jokingly: “Do you want a boy for the night?” I felt a knot in the pit of my stomach.

You can understand how the Taliban, who banned bacha bazi during their 1996-2001 rule, have managed to use these boys to mount insider attacks. A boy who has been tortured as a sex slave is ripe to take revenge on his tormentor. In many cases, killing their abusers is their only escape from servitude.

So the children are victimised twice -- first as sex slaves by their captors, then as killers by the Taliban.

My exclusive report prompted President Ashraf Ghani to launch a “thorough investigation” as he promised to do whatever it takes to punish child abusers in security ranks.

It also sparked international condemnation, with some observers asking if foreign aid should be contingent on government action against institutionalised child abuse, especially as it has a detrimental bearing on the security situation.

But shockingly absent in this entire debate is a critical question that should be the centerpiece of the discussion: what, if anything, is being done to recover children held captive at security outposts?Many have also demanded swift police reforms and slammed NATO for apparently empowering sexual predators in Afghan forces as a “lesser evil” in the fight against the Taliban.

Since my report, I have raised this question with a number of officials — only to receive evasive answers. The Afghan government has promised justice, saying it has zero tolerance for bacha bazi.

There are likely hundreds of child sex slaves in Uruzgan alone. Real justice, the only conscionable justice, will be to set them free — and stop the silent screams in their eyes. 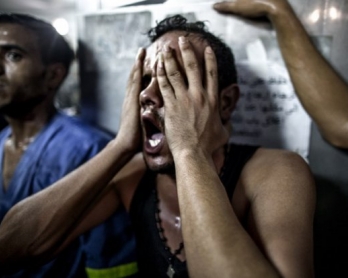 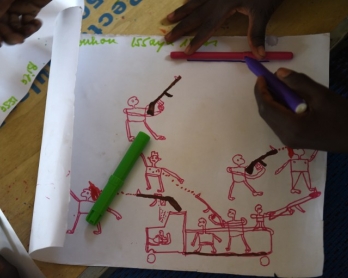