The dramatic rescue of US swimmer Anita Alvarez by her coach at the World Aquatic Championships was shot by AFP photographer Oli Scarff using an underwater robot camera developed by his colleague Francois-Xavier Marit. Here Oli tells how he captured this heart-stopping moment Budapest – As so often, the drama came out of nowhere. Anita Alvarez had just finished her solo free artistic routine in a pool at the Alfred Hajos swimming complex on June 22, when photographer Oli Scarff sensed something was wrong.

He was getting together his images of her performance on his laptop, when something made him look up.  “I saw that Anita’s coach Andrea Fuentes was in the water, and I could see a dark shape at the bottom of the pool.

“Immediately I knew what had happened, so I went straight back to the robot,” which Oli had only just been trained to use. “She had fallen to the bottom of the pool. I used the robot to photograph her and the rescue as Andrea reached her and was able to track them the whole way to the surface.”

Oli took some 100 shots – with AFP colleague Peter Kohalmi photographing the rescue from outside the water – before whittling the rescue down to 10 step-by-step images.

“As soon as it happened I knew it was a big story, a major incident. But we didn’t know what her condition was, so I waited” before sending the pictures, Oli said. 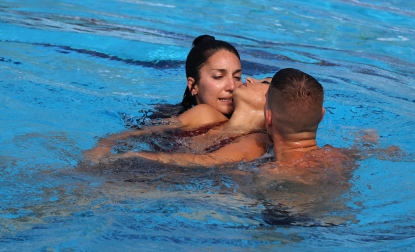 US coach Andrea Fuentes (left) cradles Anita Alvarez in her arms after rescuing her from the bottom of the pool during the world women's solo free artistic swimming finals in Budapest on June 22, 2022 (AFP / Peter Kohalmi)

Shaken as he was, the next competitor was in the pool only moments later, and Oli had to continue shooting.

“When I have photographed in places where it is dangerous, mentally you are ready. But the speed of the transition from shooting something that is so beautiful – and artistic swimming really is – to photographing something close to someone seemingly losing their life” was a jolt.

“I was very shocked and a bit shaken for a long time. I still am a little actually. I had this unique perspective on it. Everyone else was watching it through the water, and I could see it really clearly through this camera.” US swimmer Anita Alvarez (centre) hugs her teammates after the women's team free artistic swimming finals at Budapest 2022 World Aquatics Championships on June 24, 2022, two days after she was rescued after losing consciousness in the pool (AFP / Peter Kohalmi)

Happily, Alvarez made a rapid recovery and at the end of the competition “there was an announcement that she was doing OK, so I thought then we can send the pictures, Oli insisted.

The images went around the world in minutes, picked up by major media outlets. They were five of the six most shared images on Facebook within 24 hours.

Alvarez too was shocked when she first saw the photos. But now the 25-year-old swimmer, who was back at the pool to support her team-mates two days later, thinks “they are beautiful in a way”.

“To see me down there in the water, so peaceful, so quiet, and to see Andrea coming down with her arm outstretched trying to reach me, like a superhero,” she told Spanish daily El Pais.

“Sometimes the most peaceful place on Earth is underwater, when you sit at the bottom of the pool in silence,” she added. “You are with yourself. I love that. Sometimes I need that moment. And in the photos it all looks very natural.” 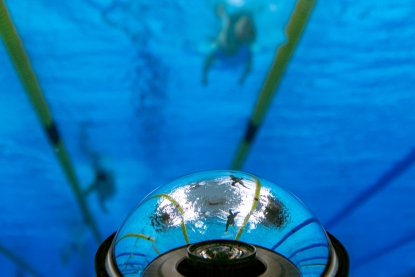 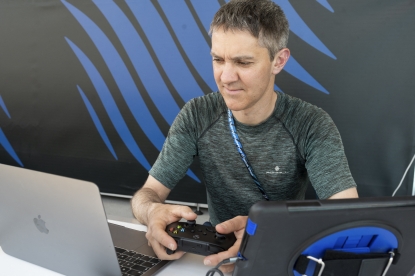 Oli, 41, who is based near Manchester in Britain, has covered World, European and Olympics swimming championships with Francois-Xavier – who he calls “AFP’s Mr Swimming” –  during his seven years as a stringer for the agency.

Ironically, Francois-Xavier had only just trained him how to use the robot, which is controlled much like a video game. “It can do anything a normal camera can,” Oli said.

While his images have won huge acclaim, he is modest about his achievement and keen to point out that it would not have been possible without Francois-Xavier’s pioneering work. “My phone almost melted with the number of notifications, messages and emails I was getting,” he added.