BAGA SOLA, Chad, April 13, 2015 – We are on the shores of Lake Chad in the Dar-es-Salam refugee camp, a dusty, crowded site sheltering some 5,000 people who fled over the border from northern Nigeria to escape the Boko Haram insurgency.

For security reasons, the authorities have grouped together all the Nigerians seeking refuge on the Chadian side of the lake. Dozens more men, women and children continue to arrive here each day. 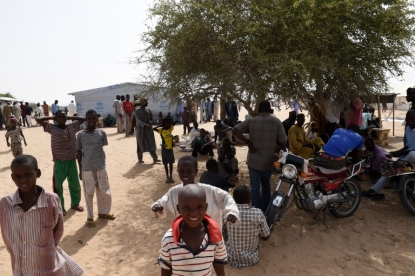 Nigerian refugees at the Dar-es-Salam camp near Baga Sola in the Chad Lake region on April 7, 2015

We arrive here on Easter Monday in the afternoon. I am travelling with Celia Lebur, a text reporter in AFP’s Libreville bureau. The place is parched by the burning sun, with midday temperatures at this time of year soaring above 45 degrees Celsius (110 Fahrenheit). The tree in this picture is probably the largest in the camp. There is not enough shade to go around.

There’s nothing here for people to do. You can sense the bitterness among the refugees, placed in a situation of enforced idleness far from their homes. Among them are a great many children. Some are here with their families. Others lost them in the chaotic flight from Nigeria. The humanitarian groups present on site are doing what they can to reunite them with their kin. 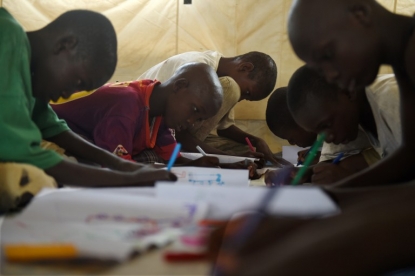 Young Nigerian refugees during an art therapy workshop at a camp near Baga Sola on April 6, 2015 (AFP Photo / Philippe Desmazes)

Under a large white tent UNICEF has been holding art therapy workshops for young refugees. I have seen this once before, during the conflict in Ivory Coast a few years ago. It’s a common technique used to help children in war zones overcome their trauma - and also a way to fill the endless days in the camp.

Organisers hand the kids felt-tip pens and large white sheets of paper, and suggest a theme. It can be nature, animals. On the day we visit, they ask the children to draw what they saw when Boko Haram attacked their villages. 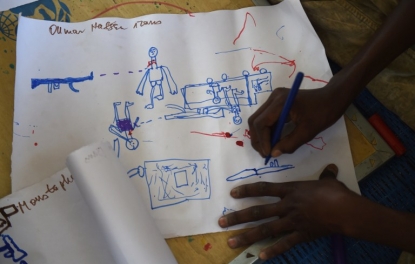 A Young Nigerian refugee draws an attack scene during a workshop at a camp near Baga Sola on April 6, 2015 (AFP Photo / Philippe Desmazes)

The result, which Celia describes in detail in her story on the camp, gives you the shivers. "This man is in his home. He is repairing it but he hears gunfire outside,” one child explains. “When he goes to see what happens, a Boko Haram fighter comes in front of his house, shoots and starts a fire. The man tries to leave, but he can't find a way out.”

Yet none of the children appear crushed by their ordeal. They have lived through unspeakable horrors, and it’s clear from their drawings they still bear scars. But in our presence they seem in every other way like normal, happy children. I am especially fond of this picture of a little boy and his improvised toy, a pot lid he chases with a wire hook. 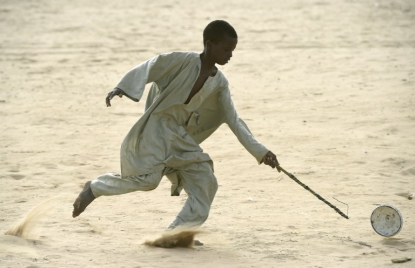 A Nigerian refugee plays on April 6, 2015 at a camp near Baga Sola (AFP Photo / Philippe Desmazes)

These are children from northern Nigeria, one of the most chaotic parts of the country even before the Boko Haram uprising. They are accustomed to a tough life.

Nigeria is still close by, less than 20 kilometres from the camp. Chad has deployed troops to the area to counter the threat of Boko Haram violence which has spilled over the border in recent months, bringing trade to a standstill on Lake Chad.

In February, Boko Haram staged its first deadly raid on Chadian soil when militants crossed the lake on canoes and torched N’Gouboua, a town of 6,000 people some 40 kilometres from the camp. The traces of their attack are still plain to see. And two days before our visit, a new Boko Haram ambush left seven people dead in a neighbouring village.

Philippe Desmazes is an AFP photographer based in Lyon 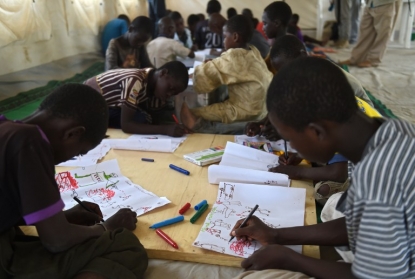 Young Nigerian refugees during an art therapy workshop at a camp near Baga Sola on April 6, 2015 (AFP Photo / Philippe Desmazes) 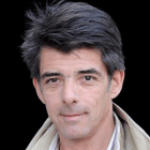 Seeking the soul of Istanbul on the Bosphorus