Caracas -- Blood stains on the ground. That’s how my masochistic relationship with Venezuela began.

It was a spot at a plaza in Caracas where three people had been shot the previous day and someone had placed an image of the virgin, along with some flowers and candles. It was 2002 and I had flown in to cover the turbulent days that followed the failed coup d’etat against President Hugo Chavez.

Ever since, things between Venezuela and me have been complicated.

I had gone to the country several times to cover special events, like the death of Chavez and the election of Nicolas Maduro in 2013. And in September 2015 I began a stint as AFP's bureau chief. 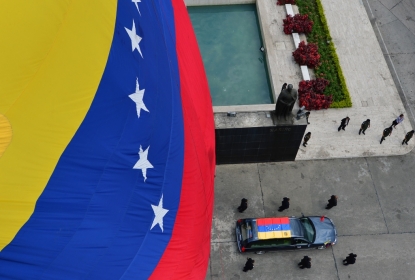 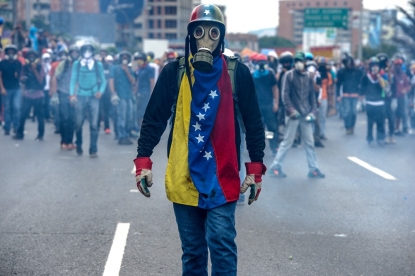 From then right up until the end I had no respite -- I started my posting just as the economic crisis deepened and when I left in March, the country was in the midst of the worst blackout it's ever seen.

On paper, my posting lasted three and a half years. But time is different here. A day seems like a week, a week seems like a month, a month seems like a year, a year can seem like a decade. My time there felt like an eternity.

Venezuela has been, without a doubt, my greatest professional and personal challenge -- how to understand it, explain it, survive it.

Never-ending queues in supermarkets to buy a liter of oil, corn flour or toilet paper greeted me upon arrival. That and the feeling of constant fear that I’d be stalked by a guy on a motorbike who would point a gun at me to steal my cell phone. 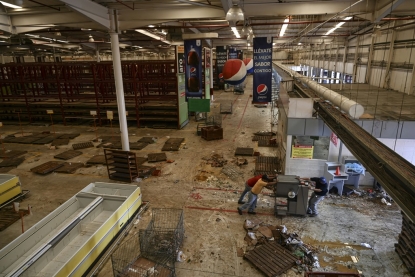 During my time here, I saw a country collapse. I lived the Venezuela of farewells; of depressing hospitals; of empty supermarkets and trucks and trucks laden with food escorted by the military; of constant looting; of barter; of empty shelves and those full of things that most Venezuelans could not buy.

My Venezuela was that of Libudina, an old woman from the Petare neighborhood in Caracas who was living out her last years in anguish because she could not find medicine for her hypertension and ulcer. Of seven-month-pregnant Marling who exploded in anger when she learned that the diapers she needed to buy had been sold out after she had waited for hours in a queue under a blazing sun.

My Venezuela was one of packages of devalued bank notes that you had to take with you to the market. Of Elizabeth who, buying some eggs with three million bolivares telling me indignantly but with humor “we’re a country of millionaires!” 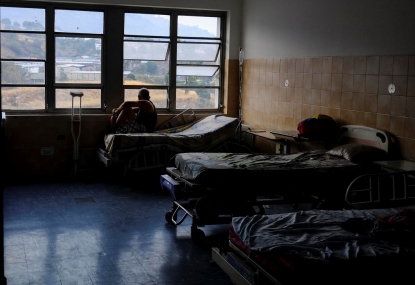 I admired the Venezuela of Nancy, who sold fried fish and beer at a coastal village at the foot of the mountains and who had to get into a boat and go out on the water in order to catch an internet signal so that she could process her customers’ credit cards to the gentle rocking of the waves.

I feared the Venezuela of Alejandra, who at age 14 already experienced insane violence as she watched a friend shoot another to death in her neighborhood, and that of the violent and chaotic world of Ender, a young miner who knew that he can die at any time among the gold he mined. 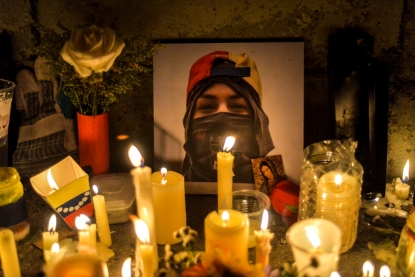 I lived the Venezuela of marches and counter-marches; of a polarized country in which one side only thinks of annihilating the other; of clouds of teargas lighting up sunsets; of two presidents; of hunger and opulence; of parallel and contradictory realities. 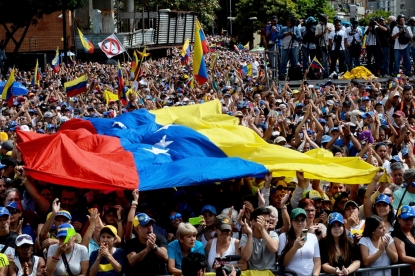 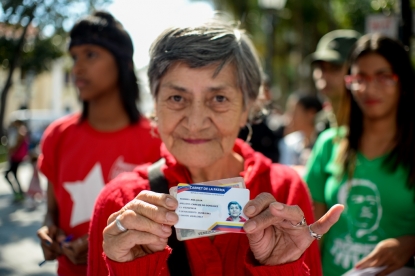 A woman shows her "Fatherland's Card," which allows her to buy subsidized food and to benefit from social programs, in Caracas, January, 2017. (Federico Parra)

Whenever I left the country I was invariably and without exception asked about it. Was it true that there was nothing to eat? Did the people support Maduro or the opposition? Was there going to be a coup d’etat or an invasion? Was there anything going on to stop the crisis? 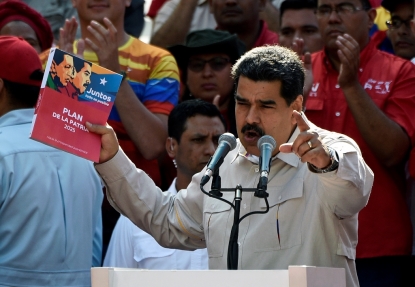 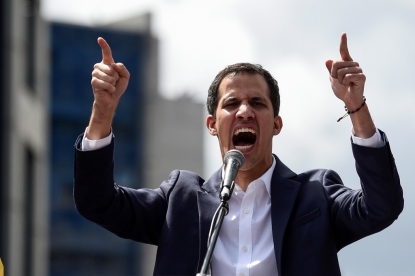 Venezuela is a country constantly on edge. If more than two days pass without the two sides attacking each other, without the opposition announcing a new offensive to end the Maduro reign, or Maduro promising prosperity during a televised address, you inevitably think that Something is about to happen. And it usually does. It is a country where calm is suspect and chaos is the norm. This is a country of constant political rhetoric, day and night.  Something always happens and it usually ends up turning the situation much worse than it was before.

In my 25 years with AFP, I have never been as stressed and tired. Throughout my posting I was constantly woken up with emails from either AFP’s regional center in Montevideo or the global headquarters in Paris. There was always something to ask, something to comment on, something to suggest. 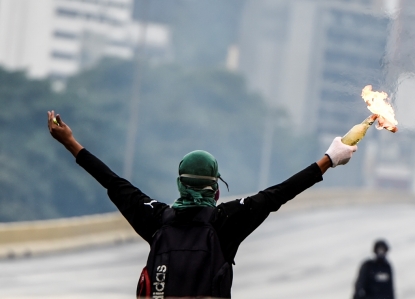 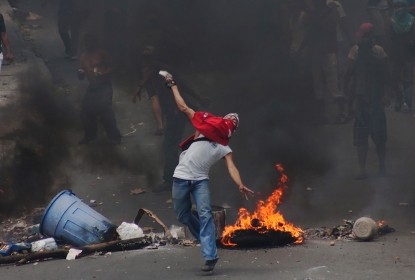 The working day never stopped at the office or at sunset. There were countless occasions when, just as we were about to leave the office, or just when we were about to sit down to dinner at home, the president would appear on national television. Without notice. Sometimes for the second or third time that day. There was nothing we could do but flip open our computers, record his speech, write it up, send it to the desk.

I had heard so much of the insufferable propaganda on official television that I would end up singing the refrain of government songs or of opposition slogans while driving or cooking. 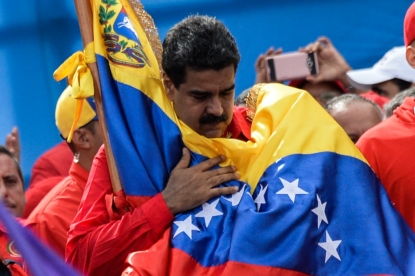 Despite the exhaustion, I lost the battle against compulsively checking Twitter and WhatsApp. I also lost the battle against insomnia. Journalists in Venezuela usually have short nights. During mine, I would often think back to a problem at the office, or of a new story idea as I waiting for the adrenaline to dissipate. Usually it only happened at dawn.

There were countless hours during which I could do nothing but wait -- the hours that my colleagues were held by either the military or civilian armed groups. And there were countless times when I was paralyzed with fear for a few seconds every time I head the president or another official accusing the international press of something or rather on television. 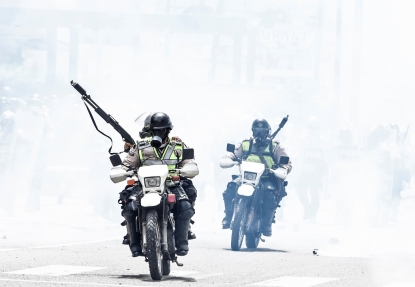 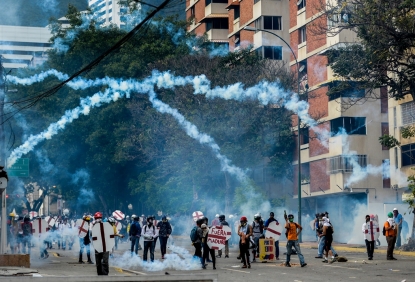 Managing a bureau in an economy as upside down as Venezuela was a true exercise in juggling and creativity. You could budget an expense one day, only to watch hyperinflation devour it the next. During the shortages, we had to scour the black market, hidden parking lots and group sales on WhatsApp for coffee, sugar and toilet paper or eggs and chicken.

By the time I got to Venezuela, I had already spent more than six years in Cuba, so I wasn’t scared of deficiencies. What was new was living in a city full of fear of the “malandros’ (the delinquents), where streets were dark and desolate from 7 o’clock at night in a self-imposed curfew.  Despite it all, we found time to admire the city’s beauty, to share birthday cakes and beer, to laugh. 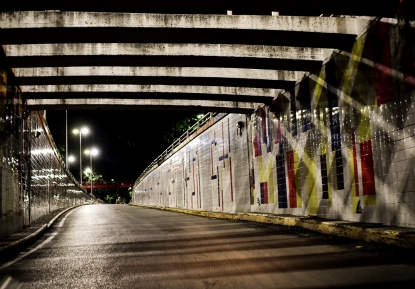 A Caracas street in the middle of the night, October, 2018. (Ronaldo Schemidt) 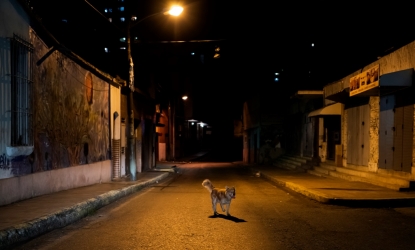 My last three months in Venezuela were crazy -- a dizzying sequence of political events that meant that I left the country still in turmoil.

As during the four months of protests in 2017, Venezuela was once again one of AFP’s top world news stories. The hardest thing about being in the spotlight was to feed the insatiable appetite for information. And just when I thought I was done, there was more to do. 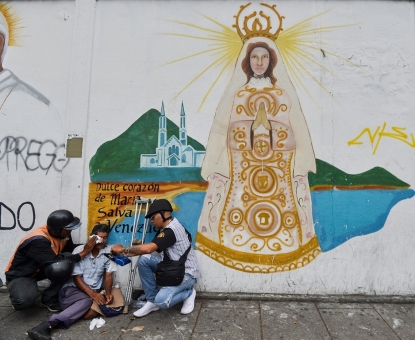 It was 4:55 pm on Thursday, March 7, 2019 when the alarms in our office went off. We thought it was just one more of the power outages that usually lasted anywhere from a few minutes to a few hours. We soon realized that the blackout affected the entire country. It ended up lasting for almost a week, setting off the latest phase of the endless Venezuelan crisis. 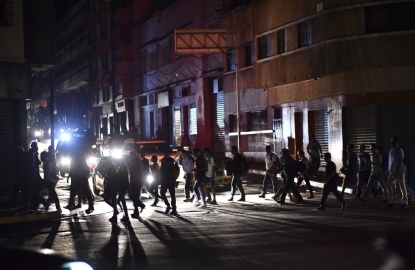 The loss of nationwide power meant a collapse of the water supply, transportation, telephone communication, Internet and commerce. Since there was almost no cash available, transactions with credit cards and bank transfers become key in everyday life. But with the power outage, the banks didn’t work, nor did electronic points of sale, so we went from the dollar being the enemy to a dollarized economy almost overnight. Even ice was sold in dollars.

With the blackout, our office became useless so we moved to a hotel to report on the chaos enveloping the paralyzed country -- sick people suffering in hospitals, desperate people looking for water or walking for kilometers because the metro wasn’t working. Many feared that the food they had bought with so much difficulty would just end up rotting in their thawed refrigerators. 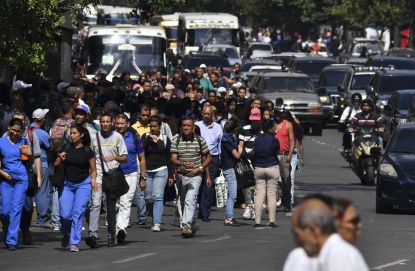 Venezuelans not able to use the metro walk in Caracas, March 25, 2019. (Yuri Cortez)

Although we had water, food and electricity at the hotel, which had generators, we struggled with communication. At night, some of us returned home. Although mine was only 200 meters away, I had to drive because the situation was so dangerous. Holding a flashlight, I would go up ten flights of stairs to my apartment, lugging a backpack stocked with a laptop, cell phone, tape recorder, a satellite phone, a notebook and communication devices. All of these worked very badly and sometimes not at all. Wolfing down some food, I would write a note by candlelight to get the news coverage started the following day. The Internet signal came and went, with the last line on the cell phone eventually disappearing. 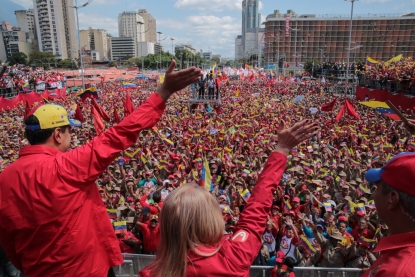 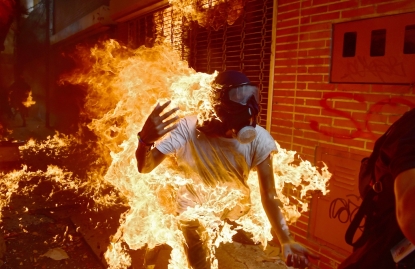 The silence of the night was interrupted by the buzz of generators that some buildings had, by the occasional insult being hurled against Maduro or by the banging of pots as a Venezuelan got his or her frustration out. Sometimes at dawn the light would go back on, only to shut off a few minutes later. The first time it happened I managed to be happy. But that didn’t last, because I knew that soon the power would just disappear again.

One day my boss in Montevideo jokingly compared me to a prisoner who puts marks on the wall to count the days until her freedom. During the last month, I did count backwards.

My farewell to colleagues and friends took place in the dark, looking at a city without lights from the 19th floor of a hotel. Hours later, before dawn broke, as I was driving to the airport, I saw some people getting water from a spring in a tunnel. Sighing, I thought to myself: "it’s a fitting goodbye.” 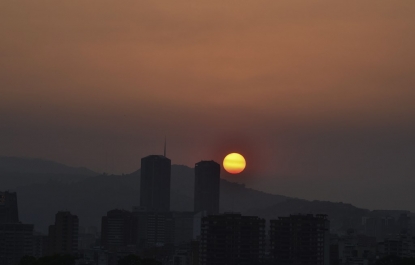 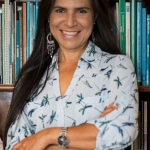 Former AFP bureau chief in Caracas.
All posts
Next post