Residents gather stranded on the stands of a stadium in a flooded area of Buzi, central Mozambique, on March 20, 2019, after the passage of cyclone Idai. (AFP / Adrien Barbier)

Beira, Mozambique -- If you asked me a few months ago what Mozambique brought to mind, I would have told you the same as  many fellow South Africans -- pleasant memories of drinking rum and raspberry soda while lying on a picturesque beach during a summer holiday. 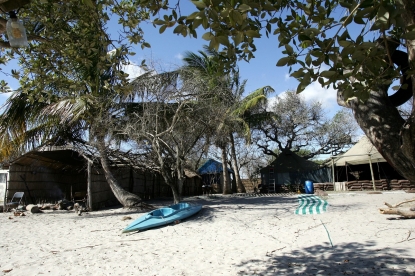 But that was before March, when I flew into the country to cover the aftermath of Cyclone Idai, one of the deadliest storms on record to hit the southern hemosphere that devastated parts of Mozambique and Zimbabwe, killing nearly 1,000 people and impacting more than two million, the vast majority of them in Mozambique.

I had covered floods in Mozambique in 2015, but that was nothing compared to the devastation wreaked by Idai as it crashed into the coast on March 14.

The full impact of the storm didn’t become apparent until a few days later, so I didn’t fly into the coastal town of Beira until the following Tuesday. The winds were so strong and rain so heavy that we couldn't land at first. The pilot eventually managed a rocky landing at night in the middle of a storm, with the relieved passengers thanking him with a loud round of applause. Our flight ended up being the last allowed to land at Beira’s airport that night. 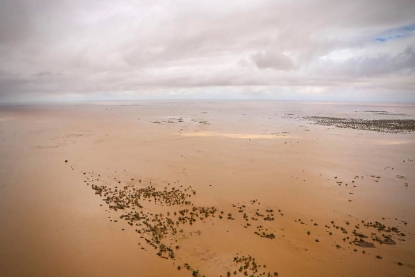 Walking from the dry and lit aircraft across the tarmac in the rain towards the dark terminal was an eerie precursor to what we would find in the coming days. Water poured through the holes in the roof of the airport building as we waited for our bags next to a conveyor belt (which looked like it didn't work even before the storm). I flew in with my Mozambican colleague Borges and we stood staring at each other in disbelief under the dim light of a few lamps as the belt suddenly screeched to life and chugged forward, eventually delivering our luggage.

We made it through 'customs' -- one lady with a flashlight checking our passports -- and found our two colleagues Adrien and Jozine. They’d arrived only a day or two before us, but looked as if they hadn’t slept in weeks.

The heat and humidity was overwhelming. You were covered in sweat 24 hours a day, even if you didn’t exert yourself. I would stand still and sweat would pour down my face. Our hotel was one of the few running a generator in reception for a few hours each day, but most rooms had no electricity. But we were lucky because our hotel was one of the few that actually had running water. 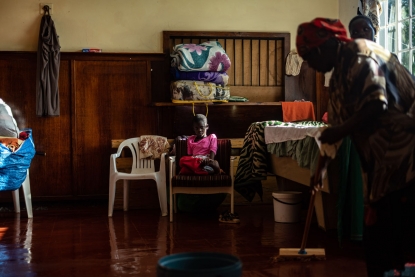 A girl sits on a chair at the Chimanimani Hotel where a hundred of affected residents, mostly women and children, are sheltered in Chimanimani on March 20, 2019. (AFP / Zinyange Auntony)

Over the next few days we scrambled to get information. There was no cellphone reception outside the airport so we couldn’t communicate with each other in the field, and we were struggling to send footage - even with the (very costly) BGAN, a bulky device that looks like a laptop and that allows you to connect to have a connection if you set it up just right, pointing toward a satellite at just the right angle. Setting it up usually takes ages.

One night Adrien and I sat on the airport roof -- near where all the South African NGOs had set up shop because the airport had power -- filing videos until way past midnight. It took about 40 minutes to send 40 megabytes, IF you had the best connection possible. At the Johannesburg bureau, it would take me less than five minutes to send the same.

We sat on that roof for what felt like a lifetime and our state of mind veered recklessly from rushed (because we had to file), to annoyed (because we couldn’t), to worried it might rain on the equipment, to delirious with laughter. We lay on our backs on that roof for three hours, waiting for the “time remaining” bar to finally tell us when we could go to sleep.

It’s strange how the most difficult times during a reporting trip end up becoming the most memorable.

The next few days was a blur of destruction, endless press conferences updating the death toll, traumatised people fleeing by boat from the adjacent region of Buzi and a continuous buzz of countless aid planes landing at the airport, which had basically become our office.

It’s always difficult for me to truly grasp the scale of a disaster like this in the beginning. The workload keeps us so busy that we barely have time to digest what’s happening around us. The reality usually begins to sink in a few days later. 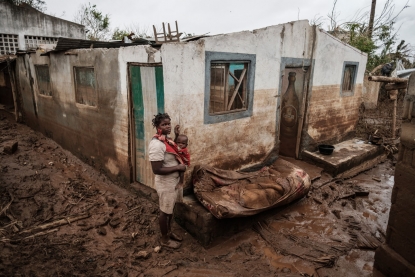 Rosa Tomas, 27, poses with her one-year-old son Dionisio Eduardo, in front of their destroyed and mud-covered home in Buzi, Mozambique, on March 23, 2019, after the area was hit by the Cyclone Idai. (AFP / Yasuyoshi Chiba) 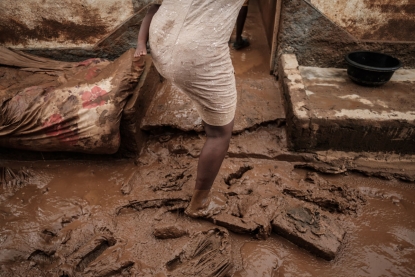 Rosa Tomas, 27, enters her home covered with mud in Buzi, Mozambique, on March 23, 2019, after the area was hit by the Cyclone Idai. (AFP / Yasuyoshi Chiba)

This time around, I realized the scale of the destruction that Idai wrought when I left the Beira area, where most of the media attention had been focused. We managed to catch a ride in a South African Air Force helicopter to the South African NGO Gift of the Givers camp in Estaquina -- much further inland and right next to the Buzi river.

On the ground I met several volunteers from all over the world who came together in this camp to help where they could -- some were medical, some logistics and some were search and rescue. But what stood out most to me was a team of three Zimbabweans -- two of them brothers -- who simply decided to pack their 4x4 with gear and fuel, hooked their boat and drove into Mozambique as far as they could just to help people they had never met before.

In the end the trio joined a group of South African volunteers and together they moved aid and medical assistance up the river by boat to communities marooned on sandbanks and river beds for more than a week without any help. 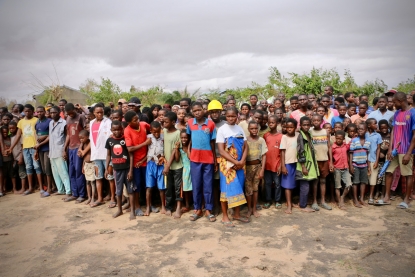 Residents who fled the cyclone wait for relief aid in Buzi on March 20, 2019. (AFP / Adrien Barbier)

One afternoon I went with them and saw hundreds of people waving frantically, pleading with us to stop. The aid teams would find out how many families were stranded in each area, go back to camp and then return to deliver buckets with food, toiletries, and water. But every time they passed by an area, more families would walk to the river in need of assistance. 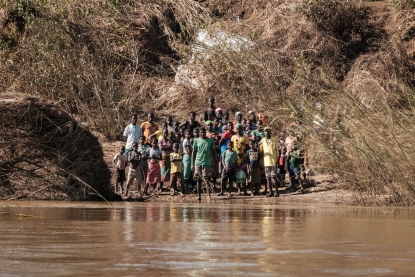 People stand on a bank of the Buzi river for help as South Africa's disaster relief organisation Gift of the Givers delivers relief supplies along the river after the area was hit and isolated by the Cyclone Idai near Estaquinha, about 80km west from Beira, Mozambique, March 26, 2019. (AFP / Yasuyoshi Chiba)

This was when the real impact of Cyclone Idai hit home for me. These people, mostly patchwork families of those lucky enough to have survived, were incredibly desperate for help but also so willing to wait for it to arrive. They stood calmly on the river bank in tidy rows -- children, then the elderly and pregnant women, and then the rest -- waiting for food which could mean the difference between life and death. 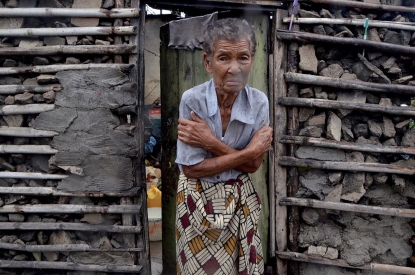 A shivering displaced woman is portrayed in the doorframe of a house in Beira on March 19, 2019. (AFP / Emidio Josine)

The next day my colleague from Nairobi Nicolas and I hired motorbike taxis to take us to the small village of Begaja -- it was the only way to access the area. It took more than 30 minutes on a muddy road to eventually reach the school where many people stayed on the roof to avoid being washed away. We were told to go visit a community even further inland -- trapped between smaller rivers -- who had suffered many casualties during the storm. We walked through knee-deep water and mud for at least another 30 minutes to find a large group of villagers huddled together at the village chief's house. They came here after the storm because their homes had been completely destroyed. 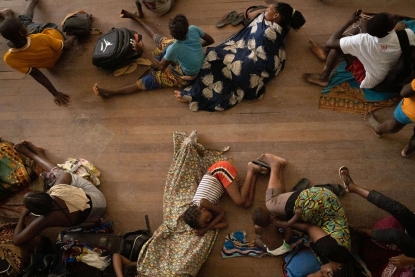 People from the isolated district of Buzi take shelter in the Samora M. Machel secondary school used as an evacuation center in Beira, Mozambique, on March 21, 2019, following the devastation caused by Cyclone Idai. (AFP / Yasuyoshi Chiba)

A 20-year-old mother told us how she and her three-year-old clambered from rooftops to mango trees to try and escape the rising waters. The trees were filled with not only other people trying to get off the ground, but also in some cases with snakes who were trying to do the same. Their tree eventually buckled under the weight and they fell into the river. The boy washed out of her arms -- she buried him herself where she found his body a few days later. She seemed both emotional and numb to what had befallen her.

It is always terrible and tricky to do interviews like these. You’re asking someone to recall, on camera, probably the worst thing that has happened to them. I try to be sensitive, but I also have to prod and ask for more detail, how she felt, how she was coping. Getting the information is important so that I can tell the story. But getting that balance right -- between being accurate and being sensitive -- can often be difficult.

After reporting trips like these, I always try and gauge and adjust myself to try to grow through what I have witnessed. After the dirt is washed off and a few good nights of sleep have eased the exhaustion, it is always the people whom I have met who stay with me. What strikes me most each time is the personal strength, especially of women, during these disasters. I wonder if I would have waited so patiently on a river bank when told food will only arrive tomorrow, or if I would be able to stand so bravely when interviewed about my child's death just a few days ago. I don't think so.

These women, these people, are much stronger than me. I get to come home after 10 days in this disaster zone, but for them this is home -- a home where the humanitarian disaster that follows the storm will likely greatly overshadow it for years to come. 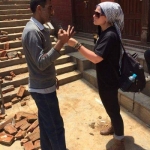 Video journalist based in Johannesburg
All posts
Next post