A woman and her baby board a dinghy to reach the Greek Island of Kos from Bodrum, Turkey, on August 20, 2015 (AFP Photo / Bulent Kilic)

BODRUM, Turkey, Sept. 4, 2015 - Usually in summer, Bodrum is known as a glitzy destination for Turkish celebrities and moneyed Istanbulites, its upmarket nightclubs and golden sands earning it the moniker of the Turkish Saint Tropez.

But this year, with the summer holiday season in full swing, the Bodrum peninsular has become a launch point for refugees making the open boat journey from Turkey to the EU and the Greek island of Kos, tantalisingly visible to the south.

Some will make it to Greece to have a chance of forging a new life in the European Union.

But, for others, the shiny resort will turn into a trap they cannot leave.

And several won't make it out alive. 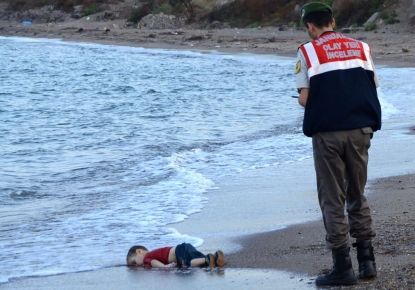 The dangers were made clear to the world like never before when a photograph went viral this week of a 3-year-old Syrian boy's corpse washed up on a Bodrum beach.

The toddler and his five year old brother were victims of the latest disaster in the Aegean, as their dinghy sank while carrying them and several other former residents of the Syrian town of Kobane.

The atmosphere is tense. It's hard to report. Quite apart from the language difficulties, the refugees are scared and don't want to talk.

They are not making the open boat independently but under the control of people smugglers, who they have paid over $1,000 per head to organise the operation.

They wait for a phone call from the smugglers telling them it's time to go and fear talking to the press could jeopardise their dream. Click here to watch this video on a mobile device

The parks, bazaars, beaches of Bodrum are full of Syrians. In downtown, they are packed in the hostels area, open-door parks or the garden of the town's municipality close to the bus terminal.

I saw around 100 Syrians living in a playground lying on mattresses or carton boxes. 30-year-old Hatim, who fled from Raqa, was one of them. "This is our home. We sleep here. No bombs like in Syria," he said. "I will go to Europe to find a job."

They are taking almost nothing with them except for the ambition of a new life -- all wear cheap life jackets, some carry rings and even nylon bags of bread.

But smugglers tell them to take as little as possible to squeeze more people into the boat.

Their most important items are mobile phones -- hung around their necks in waterproof bags, as well as money hidden in their underwear.

There are a number of shops selling life jackets, with prices varying from 40 lira ($13.5 ) to 100 lira ($34) -- several times less than the price of a safety-certified item. Many are said to just be stuffed with newspapers. 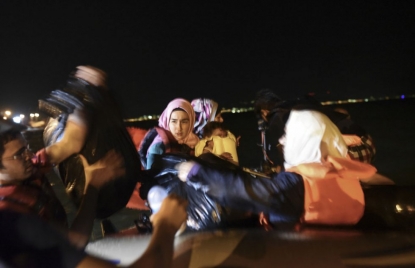 The migrants are terrorised and do not want to speak. I guess most of them do not know how to swim and are scared to die.

Celine Clery from AFP Video, who joins me to report on the Turkish side after working in Kos, said the atmosphere among the refugees on the Greek island was totally different, with the migrants who had made it were happy and relieved to be in Europe.

With our photographer Bulent Kilic, after talking with locals and eyewitnesses, we took note of a number of beaches which refugees often use for passage.

We park our car on the roadside, with the lights of Kos visible on the horizon. Several gendarmerie cars pass by as the Turkish coast guard patrols the Aegean Sea. The clock ticks down, two restaurants nearby switch off their lights, the sea looks calm and the sky full of stars. The major activity begins after 2.30 am, when only the flares from the lighthouse remain visible. At first, several yellow commercial taxis patrol the two-lane road. One taxi driver parks a few kilometres from our car, watches the sea, sends a text message and disappears in the dark.

After the taxi vanishes, we see a handful of migrants shouldering a boat behind the bushes and descending to the shoreline. We run after them, following the bumpy path leading to the shoreline. The group put the craft in the water, and the last man, with paddles in his hand, wades through the water and boards the tiny boat.

Traffickers coordinate the passage, guiding the group when to embark on and from which point.

Another night, we saw around a dozen Syrian refugees who arrived at the coast. They were shocked by the camera lights. They made the first attempt but failed to start the engine of the boat.

All emptied the dinghy, disguised their faces and climbed the hill. They were all in a panic, scared to be spotted by the Turkish gendarmerie.

One of them shouted to the cameras: "If we lose our lives, you are the reason!" Syrians push away Africans who try to board their boat to Kos on early August 15, 2015 off the shore of Bodrum (AFP Photo / Bulent Kilic)

At another crossing point, we find a Pakistani people smuggler who was prepared to talk: Speaking in broken Turkish, he said he worked in Istanbul for a while but "no money" there, so he came to Bodrum. We stood silently before the bushes and could hear the movements of the refugees waiting their turn to get on the boat.

A group of around 50 refugees, including children, packed on the beach, sitting at the shore as some others brought the boat into the water on their shoulders. And they went afloat with the screams of children slicing through the air.

We will probably never know if they made it, to take one step closer to the dream of a stable and secure life in Europe. Or were forced back to Turkey after a failed crossing. Or worse.

But the smuggler, knee-high into water, looks happy, telling us he has to leave to find more passages after he earned at least $50,000 dollars from one single boat. An African migrant tries to come back to the shore after failing to board a boat to Kos on early August 16, 2015 off the shore of Bodrum, southwest Turkey (AFP Photo / Bulent Kilic)