A racing officials' boat is hit by the Spindrift 2 trimaran on June 16, 2015, just before the start of the 9th Leg of the Volvo Ocean Race, off the coast of Lorient, western France (AFP Photo / Jean-Sebastien Evrard)

Slashed by a sea monster

LORIENT, France, June 18, 2015 - The Spindrift 2 is the world’s largest racing trimaran. An extraordinary sailboat. Forty metres long, it holds a round-the-world record and frequently hits speeds of more than 45 knots – or 85 kilometres per hour. At full speed, its rudders and daggerboards are sharp as razor blades. Not something you wish to see hurtling towards you out at sea.

Yet that is what I witnessed, on June 16 in the afternoon, off the coast from Lorient in Brittany.

The ninth and final leg of the Volvo Ocean Race – a round-the-world monohull sailing competition – was about to begin. The Spindrift 2 was not participating, but it is moored in Lorient and it is traditional for large boats to sail out for the start of races taking place at home. I was on board one of the press boats, along with three other photographers and two crew. The weather was gorgeous, the work conditions ideal. Before sailing out towards the finish line in Gothenburg in Sweden, the contestants started by running a short regatta off Lorient.

Our press boat was bobbing outside the strict exclusion zone set up by the organisers, so as not to obstruct the race. There are always a lot of people out on the water on big racing days. Several organiser boats were on hand to prevent the many day sailors and jet skis in the area from straying into the race’s perimeter. The Spindrift 2, moments before the collision (AFP Photo / Jean-Sebastien Evrard)

I saw the Spindrift 2 heading towards the start line. Almost stationary at that point, it tacked to port, and headed out to sea picking up speed. It was sailing straight for the group of organiser boats.

Right away, the manoeuvre seemed dangerous to me. This trimaran is like a Formula One racer out at sea. It is also a giant that is not easy to manoeuvre, and here it was hurtling at high speed towards a dinghy whose pilot had no time to react. He seemed paralysed, just as we were as we watched from the press boat.

The scene lasted just seconds. The impact was inevitable. I saw people throwing themselves off the dinghy in a panic, their life jackets inflating as they hit the water.

One of the Spindrift’s huge rudders hit the side of the dinghy, making an awful whacking sound. A woman was thrown violently overboard. I was the only photographer on the press boat who lifted my camera to take a dozen pictures as the shocking scene unfolded. I didn’t realise at that point how serious it was. 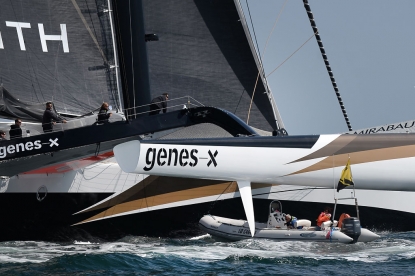 Our speed boat raced the 30 or 40 metres to the accident site right away. But within seconds two marine rescue teams were already taking things in hand.

A huge pool of blood was spreading in the sea near the dinghy. After 20 minutes or so, a helicopter arrived and airlifted the victim, who was in a bad state.

I later learned that the victim was seriously injured, and was transported to a Lorient hospital. The marine gendarmerie has opened an investigation and Spindrift Racing has promised to cooperate fully. What a terrible day.

Jean-Sebastien Evrard is a freelance AFP photographer based in Nantes A photographer based in Nantes, France.
All posts
Next post