Half Moon Island, Antarctica -- It was a reporting mission that they’ll remember for the rest of their lives. A trip aboard a luxury cruise to one of the Earth’s most desolate places, Antarctica. A place of stunning beauty and contrasts that can move you to tears. Photographer Johan Ordonez, video journalist Viken Kantarci et text reporter Pierre-Henry Deshayes share their tale. 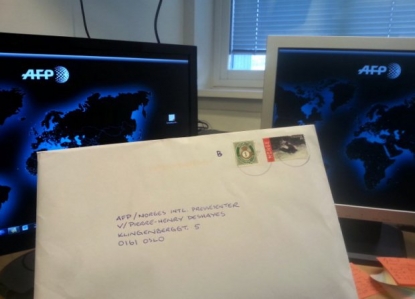 "Over the course of one year, I have received three letters from Anders Behring Breivik", writes AFP's correspondent in Oslo Pierre Henry-Deshayes. "A quick glance at the envelope is enough to identify the sender. The neat, clean handwriting in block letters is impossible to mistake for anyone else’s. It makes my blood freeze."

Then comes a fundamental question: Should AFP disseminate the contents or not? Obviously, in this type of situation journalists run the risk of being used and abused. On the other hand, people want to know how peaceful Norway could give rise to such a monster. They want to know what that monster is made of.