ISTANBUL, April 4, 2016 -- Mohammed K. is in a Kafkaesque situation -- for the past five months this refugee from Syria has been stuck in a no-man’s land at an Istanbul airport, unable to enter the country, but unable to leave.

His nightmare began in November 2015 when he landed in Istanbul with his wife and close friends on a flight from Amman, Jordan. “Everyone made it through customs, except me,” says the 28-year-old, dark circles under his eyes, who still can’t believe what is happening to him.

Since then, Mohammed has been held in a grayish room of the airport reserved for “passengers with problems.” The room is just a few steps from police offices, international counters, and long lines of travellers coming from all corners of the world. 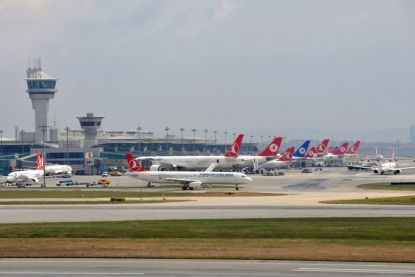 When I arrived in Istanbul on a flight from Paris one late afternoon recently, I also got the privilege of being a guest in that previously unknown room at the airport. To the Turkish authorities I was clearly a member of that group, “passengers with problems.”

'No Istanbul, return to Paris'

When I got to passport control and handed over my passport, the agent frowned after typing my name into his computer. One of his colleagues came and led me into the terminal’s police station. There, a silent official filled out a series of papers before glancing at me and saying in hesitant English: “No Istanbul, return to Paris tomorrow.” He added: “Security reason; you are not authorized to enter Turkey.”

I had a vague sense of what it could be about… Between 2012 and 2013 I spent almost a year covering the war in Syria from the southern Turkish city of Antakya, where I was based. When I had to go into Syria, I did so by either legally crossing through the Bab al-Hawa border post, or illegally, like the hundreds of refugees, fighters and jihadists were doing every day. 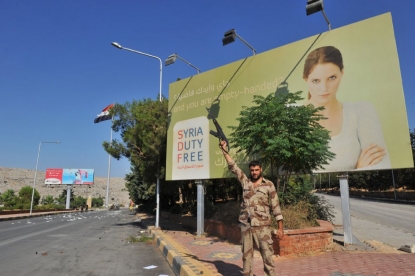 A Syrian rebel poses in front of a sign at the Bab al-Hawa border crossing with Syria. July, 2012. (AFP / Bulent Kilic)

Returning from one of these journeys, I was arrested by Turkish authorities. Detained for two days and threatened with expulsion, I was finally released after paying a fine. I was then allowed to continue working. I thought the affair was laid to rest.

After the Islamic State attacks, some of the international criticism centered on Turkey’s “lax” attitude toward the jihadists and the war being waged inside the country by the PKK, a Kurdish rebel group. It seemed Turkey had responded by ratcheting up its security levels.

So there I was, in the room for “passengers with problems.” My cell, computer, camera, and all my other electronic equipment had been confiscated, along with my passport.

Under the watchful eye of a police surveillance camera, the area served as a holding area and dormitory for all undesirables landing on Turkish soil -- those who’ve lost or didn’t have a passport, those who’ve been refused a visa or those, like me, who were being thrown out of the country for “security reasons.” 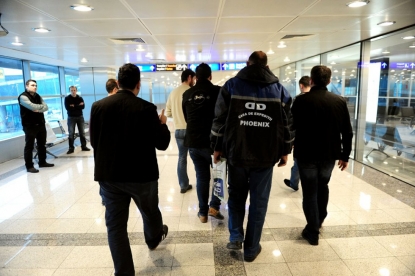 The comforts were more than basic: A row of airport waiting chairs, a dozen futons, some folded out into individual beds with pillows covered in suspicious spots. The room had no windows, but it was bright, day and night, thanks to the artificial ceiling lights that were never turned off.

A half-eaten dinner lay on one table. An Iraqi Kurd from Erbil lay on a bed, his face hidden under a towel. The only door was kept locked by a guard posted in the office next door.

People came and went, sometimes staying for a few hours, sometimes for a night or two.

A pathetic-looking, bearded man with the physique of a bodybuilder came in next. Nationality? “Turkish, coming from Vienna,” the 30-something ground out. It was hard to understand what he was doing there. He made his way to a bed, flopped down on top of it, reached for the TV remote and, as if hypnotized, settled to watch an episode of “The Voice” Turkey.

In the middle of these short-term 'guests,' Mohammed was an anomaly. Confined to those four walls for five months, he became a long-term resident for reasons that he said were “inexplicable” to him.

“It’s completely crazy! There are nearly 3 million Syrian refugees in Turkey, but they still won’t let me inside the country,” he raged to me. He said he couldn’t be sent back to Jordan or to war-torn Syria. There was no question of him being sent on to Europe, his dream, where his wife was able to make it to Germany after travelling across the Mediterranean, like thousands of other refugees.

“I told them to send me to Sudan (where Syrians don’t need a visa), to Somalia, doesn’t matter where. But I need to leave this place! The police know I’m not part of IS. They know I’m not a member of PKK nor am I a criminal. Why don’t the Turks accept me just like any other refugee?” 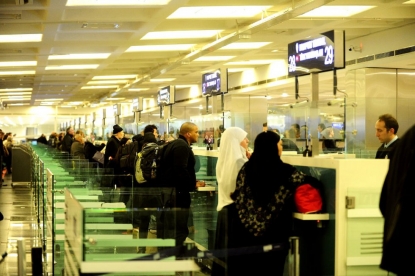 His grotesque story sounded like something straight out of “The Terminal,” the 2004 Steven Spielberg film in which Tom Hanks starred as an Eastern European tourist who got stuck at John F. Kennedy Airport in New York because war breaks out in his country.

Since the beginning of March, Amnesty International has taken up Mohammed’s case, denouncing a “blatantly arbitrary detention.” In a similar situation, another Syrian refugee was held for nearly a year at the city's other airport.

The adjoining bathrooms provide him with a sense of privacy, and a place to smoke. The guards give him a few cigarettes, and have let him hold onto his phone -- an unheard-of privilege -- which is his only connection with the outside world. He uses it until late at night, until he’s able to fall asleep under those harsh neon lights.

With no books or magazines to keep his mind off his ordeal, Mohammed’s life revolves around watching the drama of those who come in and eventually go out again. “I see a lot of people, a bit of everything,” he says. There are probably jihadists and those who hope to be jihadists in the mix, but they “don’t cause any trouble.” They generally just perform their daily prayers, he says.

“The guards are generally ok,” he says. “The cops are fair, except that day a Kuwaiti had the stupid idea to raise his voice and knock on the door.” Mohammed takes a fighting stance and mimicks the supposed punishment the Kuwaiti received.

With his long shorts and flip-flops, he says he once engaged in a “10-day hunger strike” to protest his fate, but nothing happened. His Turkish attorney is likewise inefficient. “I’ve never met him. He doesn’t speak Arabic or English, and the only thing he seems capable of saying on the phone is, please wait.”

Better to laugh than cry

Mohammed says his story is an "international scandal.”

“I prefer to laugh about it than cry,” he adds. “I joke about it sometimes with the police officers; they tell me I’m going to stay until the war in Syria ends. That means I’m stuck in this hole for at least 10 years!” 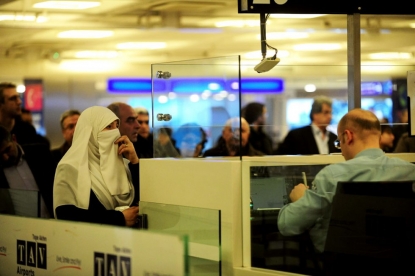 My situation ended up being much shorter. I spent the night reading and managed to sleep a couple of hours under the lights. An airport official came and got me in the early afternoon the next day. He accompanied me to a plane without a word. I got my equipment and luggage back, but my passport, sealed in an envelope, remained with the onboard personnel.

When we landed at Charles de Gaulle, a welcoming committee of two uniformed police officers waited for me outside the plane’s door, saying they needed to do some “verification checks.” Their tone was much friendlier. A few minutes later, I had my passport back and was free to go out into the Paris air.

Herve Bar is an AFP journalist based in Paris. This blog was translated by Solange Uwimana in Paris. 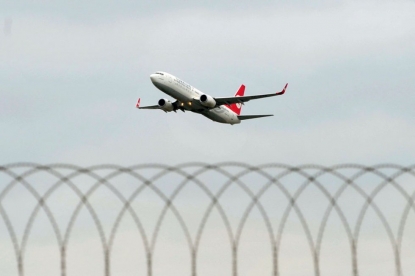