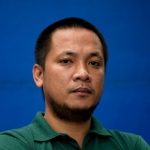 AFP photographer based in Manila.

"Sometimes it takes the whole night, other times the dead bodies turn up early. What's certain is that the Manila Police's graveyard shift is now worthy of its sinister name".

Philippine president Rodrigo Duterte was elected by a landslide in May, largely on a pledge to clean up the streets by killing tens of thousands of criminals.

His campaign threats were backed by his record in southern Davao city, which he ruled for two decades according to his ruthless law-and-order policies. He was accused of running or tolerating death squads that killed more than 1,000 suspects.

Police say 402 drug suspects have been gunned down in the past month, and rights groups claim hundreds more have been killed by vigilantes. Thousands of people have also been detained, doomed for lengthy stints in underfunded and overwhelmed jails.