Stepanakert - When they left, they took with them all the usual kit for reporting on a conflict: bulletproof vests, helmets, satellite phones and first-aid supplies. But, as the AFP journalists dispatched to Nagorno-Karabakh discovered, covering a war in the time of coronavirus brings a whole new dimension to staying safe.

Three days after fierce clashes erupted between Armenian-backed separatists and Azerbaijani forces over the disputed region, AFP began sending in teams behind both sides of the frontline. More than a dozen journalists -- in text, photo and video -- were dispatched via the Azerbaijani capital, Baku, and Yerevan, the Armenian capital. Within days of the conflict erupting, two journalists from the French Le Monde daily had been badly injured. 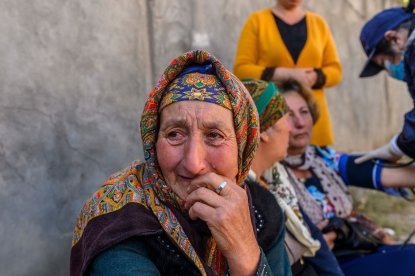 People gather near a site hit by a rocket during fighting over the breakaway region of Nagorno-Karabakh, in the city of Ganja, Azerbaijan, on October 17, 2020. (AFP / Bulent Kilic) 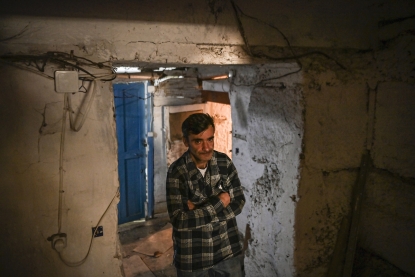 A man looks on as he stands inside a basement shelter in Stepanakert on October 14, 2020 (AFP / Aris Messinis)

In what would end up being six weeks of fighting, soldiers and civilians died in their dozens on a daily basis. 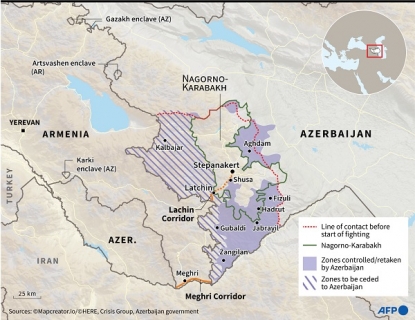 All the while, the coronavirus was advancing, without regard for territorial boundaries, ethnicity or nationality. To escape the combat in a war zone, there are some basic rules of thumb. Taking refuge in cellars is one. Another is to scrutinise the holes left by shelling on the front of buildings -- if the damage is on the western side, you shelter in the opposite, lesser exposed part, says AFP photographer Bulent Kilic, who reported from the Azerbaijani side. Also, once rockets begin being fired, adds videojournalist  Kadir Demir, you can figure out where the anti-aircraft defence is located and get an idea from where imminent danger may be coming.

But to escape Covid-19, the guidelines are quite different and even turn some of these practices on their head, as closed-off spaces and those that are poorly ventilated with high density populations -- like cellars -- are to be avoided at all cost.

During the long weeks of constant bombing, the virus seemed an almost futile subject. "We had left with a good supply of masks and some bottles of sanitising gel," said Kadir, who arrived with Bulent on October 8 and were joined by reporter Dmitry Zaks in the city of Mingachevir, under Azerbaijani control. "But we were more set for classic war reporting. We were thinking, is the bulletproof jacket going to do any good?" Bulent recalled. On the other side of the frontline, in Stepanakert, the main city of the breakaway province, reporter Emmanuel Peuchot noticed that no one in the town or the trenches was wearing a mask, including journalists. 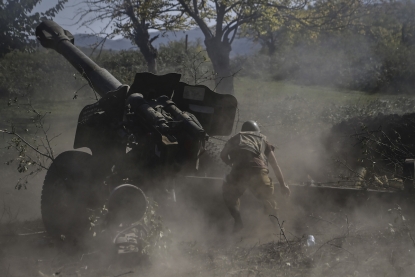 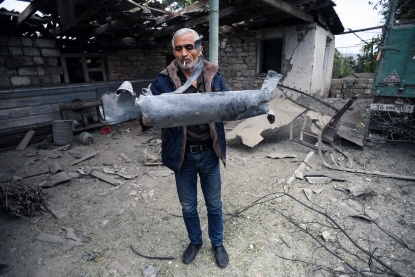 "Unconsciously there was maybe the feeling that wearing this mask was indecent, derisory, while residents of Stepanakert were staying despite the bombings, despite death which lurked overhead when the invisible drones flew over the town day and night, when the sirens tore through the silence, warning of a sudden hit, that could come anywhere," he said. "How do you wear this mask on the frontline where death can suddenly strike at any moment?" 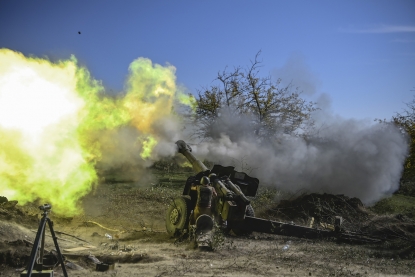 An Armenian soldier fires artillery on the front line on October 25, 2020, during the ongoing fighting between Armenian and Azerbaijani forces over the breakaway region of Nagorno-Karabakh. (AFP / Aris Messinis)

"In the beginning I wasn't thinking about the virus at all... in any case, not before the first rocket fell on Ganja, on homes," Kadir said.

"There was a huge number of people around us, rescuers, residents. So, I put on my mask. A way of lifting the pressure faced with what I was seeing: bodies pulled from the rubble, worried people, families in tears... it's as if I was clinging to something I knew," said Kadir, who like the other journalists sent there by AFP has experience of covering conflict, including in Syria. "You divert your stress a bit onto something else. The mask, in a way, felt reassuring." 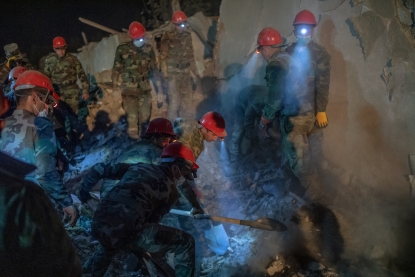 Rescue teams sift through rubble at a site hit by a rocket during fighting over the breakaway region of Nagorno-Karabakh, in the city of Ganja, Azerbaijan early on October 17, 2020 (AFP / Bulent Kilic) 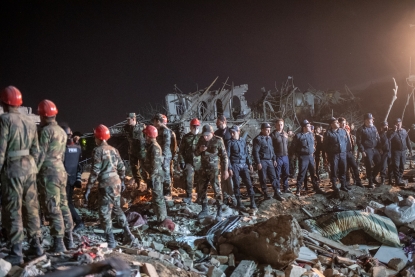 Rescue teams work at a site hit by a rocket during fighting over the breakaway region of Nagorno-Karabakh, in the city of Ganja, Azerbaijan early on October 17, 2020 (AFP / Bulent Kilic) 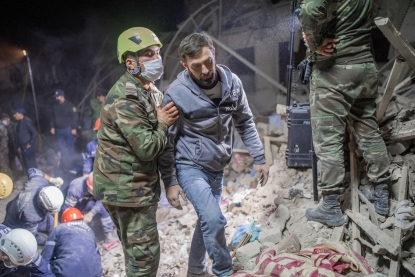 But, for the town's residents, he said, with rockets raining down, they probably felt their priorities laid elsewhere.  "They just have one thing in their head. They all say to me 'we want our land freed'," Kadir added. In Stepanakert, the AFP reporters shared the daily lives of those residents who hadn't fled and were sheltering in basements. Conditions were basic, with mattresses on the floor, damp and poor lighting. There, Emmanuel met the head of a medical testing centre in the town, Lusine Tovmasyan, who went round residents testing them. She said that 40 to 60 percent came back positive. Meanwhile, a doctor at the central hospital said he believed that 90 percent of residents had Covid-19. 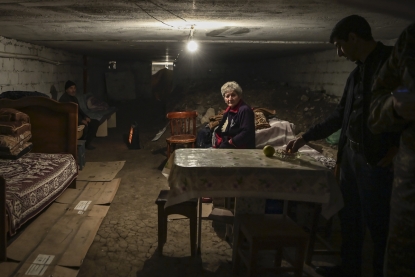 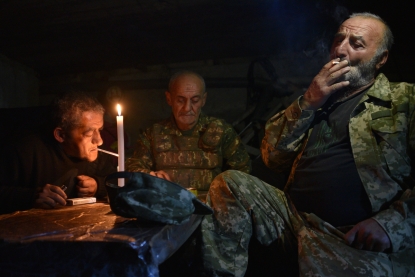 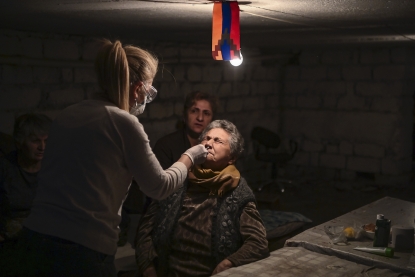 On October 19, the AFP team in the area under Azerbaijan's control learned that a journalist with whom they had shared a car had contracted the virus. At the hotel, the local authorities announced they would begin testing all of them the following day. The first result was negative. 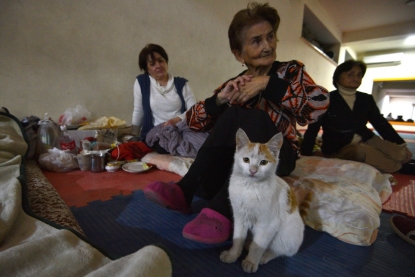 Locals shelter in the basement of a kindergarten in Stepanakert on November 2, 2020. (AFP / Karen Minasyan)

But the fear for the reporters was not only that they could be infected themselves, but also of having infected local people. "These questions haunted me," Bulent said. "I thought, what if someone catches it because of us? Who have I passed it on to, have I infected somebody?  "There were elderly people in the cellars that we were visiting," he added.

Two days later came the hammer blow. Of the six people who had travelled in the shared journalist vehicle, four others had tested positive, including Kadir. At the end of October, Emmanuel, who had not been with them as he'd been on the other side of the frontline, discovered he had the virus too, after taking a mandatory test at Paris' Charles de Gaulle Airport getting off the plane on his return from Yerevan.

"The problem is that, with Covid, we're fighting a war on two fronts," a leading official told reporter Herve Bar in Yerevan.  That official's father, a doctor in a hospital in Nagorno-Karabakh, had died of the virus. 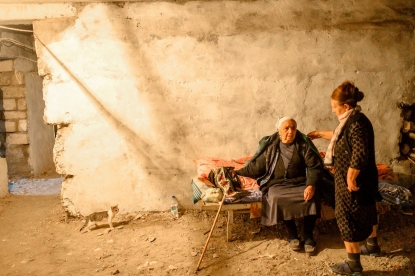 In Baku, Kadir was told to stay in his room and wait for the doctors being sent by the authorities. "I didn't have a choice. They took me to a prefabricated field hospital, half an hour from Baku, near the Caspian Sea," he said. Banned from leaving the country until the virus had passed, he shared a clean, spartan room with two other journalists and didn't suffer too much, at least not physically, as a result of Covid. Finally, he departed on November 4.

Back home in Istanbul, he called his family in France, near the north-central town of Orleans, and came clean. No, he wasn't in Baku waiting to get an interview with the presidency... he was in hospital. When you're reporting on a conflict, you don't tell your family everything, even if the risks in the hospital were in fact smaller than in the trenches. "In the hospital they wanted to take very good care of us because we had come to cover their conflict," Kadir said. "They were very caring, even though the empty rooms quickly filled up, with women with children, the elderly, obese people," he said.

In Paris, as he convalesced, Emmanuel's thoughts turned to those killed in the war, which was being talked about far less than Covid-19. "In Nagorno-Karabakh, it's the war that kills the most, not Covid, the priority is the war, not Covid, you have to first survive the war, not Covid," he said.

On the ground, it is a grim contest between the scuds, rockets and killer drones on the one hand, and the invisible coronavirus. Fighting came to an end in Nagorno-Karabakh a week after Armenia agreed to sign a Russian-brokered peace accord sealing its defeat to longtime rival Azerbaijan. Yerevan agreed to cede swathes of the disputed region to Baku, as well as other territories controlled by Armenian separatists since a war in the 1990s. The agreement infuriated many in the capital, where protests erupted.

As a mass exodus began, under the terms of the deal, from the Kalbajar district in Azerbaijan, homes in one village were set on fire by their departing owners to make them uninhabitable for the coming Azerbaijanis. 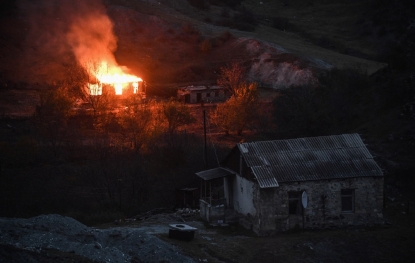 Thick plumes of black smoke could be seen rising over the valley. But a lasting solution to the decades-long conflict remains elusive and, while the weapons have fallen silent, the other battle continues in the region. 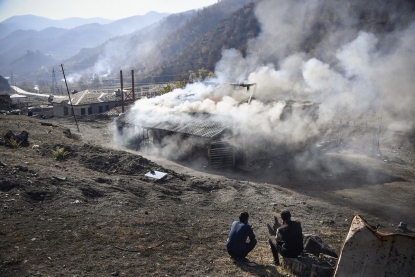 In Azerbaijan, the virus is on the march, with more than a thousand cases a day since the end of October, according to official figures. More than a 1,000 people have died of it, with the toll topping about 15 dead every day since the beginning of this month. In Armenia too, an average of 1,600 cases were reported daily since the start of the month and more than 1,900 have died.  For now, this war goes on.

This blog was written by Bulent Kilic, Emmanuel Peuchot and Kadir Demir. Edition: Kate Millar and Michaëla Cancela-Kieffer in Paris 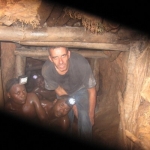 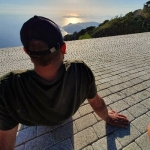 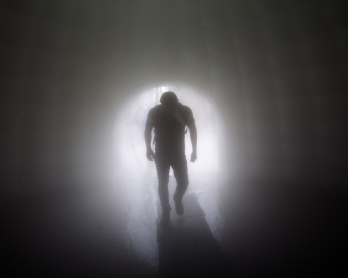 Love and fear of dying in the time of coronavirus 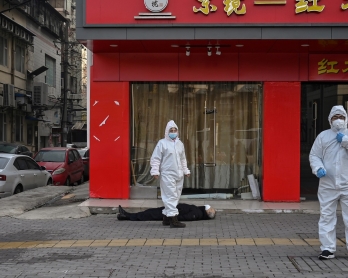 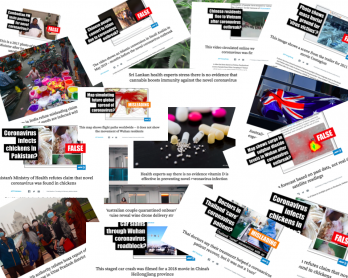 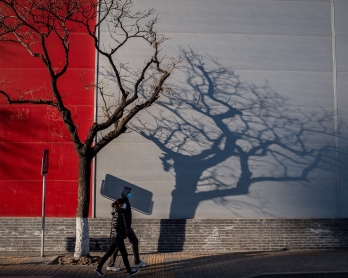 Crossing the sea together, yet miles apart

Journey to the top of the earth