Mashed potatoes in the hautest cuisine

Paris -- Mashed potatoes may not be the first dish one associates with a top chef. But in a way, the fact that Joel Robuchon, the celebrated French chef who died last week, had perfected such simple fare reflected who he was -- down to earth, accessible, an artist and lover of his craft who could make your mouth water with a description of a roast chicken.

During the three years that I covered gastronomy for AFP, Robuchon was the one I called whenever a known chef died. He knew them all and they all knew him, so he could always offer insight.

Although I didn’t meet him often during my posting, I had his cell number and didn’t hesitate to call when I needed him to contribute a morsel on this or that. He always returned my calls. And he never failed to disappoint. 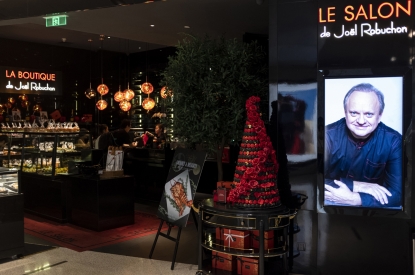 When Charles Barrier, one of the great French post-war chefs and one of Robuchon’s mentors, died in 2009, his description of his specialty left me speechless.

“He made the best roast chicken I ever ate,” he told me. “A simple roast chicken. That can seem odd. He cooked his bread in a huge rotisserie oven and when the crust began to turn golden, he would put the chicken beside it. The chicken would begin to expand and to become crusty and the skin would absorb the taste of the bread… it was a masterpiece.”

His description was so precise, said with such feeling that after hanging up, I sat there in a trance, my mouth watering. The palate of a man often called one of the four “chefs of the century,” the chef who had earned the most Michelin stars with his establishments -- 32 at one point -- had retained such exquisite memories of that simple dish made by a man who “taught me everything” that I couldn’t help but be in a daze for a bit. 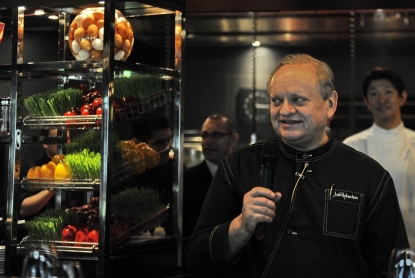 Joel Robuchon speaks to the media at his Atelier restaurant in Singapore, April, 2011. (AFP / Simin Wang)

Perhaps it was fitting then that he had become famous for a dish as simple -- the mashed potato. Not every chef -- even among the most celebrated -- gets to have the honor of having a dish associated with him. The details of his recipe have been hotly debated in many a restaurant kitchen -- there wasn’t a chef who didn’t have an opinion on the matter. Was that much butter really necessary? And did you really have to do all the steps like he said? First you have to mash the potatoes. Then you add the butter, which has to be cold, not room temperature. You needed plenty of elbow grease to stir continuously. In short, the dish was a work of love and patience. Art. 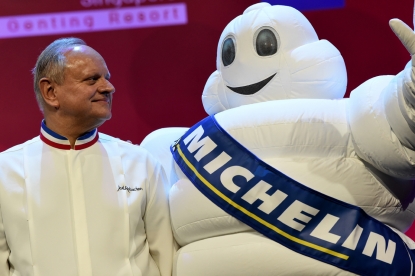 “Robuche,” as he was called by his peers, had built an impressive career when, at the age of 51 in 1996, he slammed the door on his coveted three Michelin stars. He didn’t want to die of a heart attack because of the constant stress, so he got out of the kitchen. He dabbled in television shows and published numerous books (including one dedicated to potatoes) before coming back to the kitchen by opening his “Atelier” concept restaurants -- first in Paris and Tokyo, and then in London, Las Vegas, New York, Singapore.

The eateries were inspired by sushi counters and tapas bars -- he wanted to create a more relaxed and accessible restaurant where customers could watch their fare being created. An exquisite mix of simplicity and luxury. 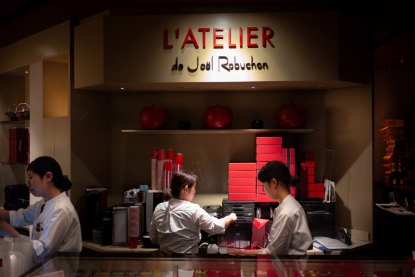 Like most great chefs, he could fly into a rage if something did not measure up to perfection in his kitchen. But at presentations, openings and celebrations he was always composed, affable, speaking in an assured and calm voice.

At each new opening of his “Atelier,” he would spend a good month at the location ahead of the opening with a few trusted members of his team, to train the staff and prepare for the big day.

I once ate at his Atelier in Paris, shortly after its opening in 2010. The team was dynamic and happy, cooking times and seasoning administered with diabolical precision. The chef himself, in his ubiquitous black Chinese vest, was smiling. He seemed to revel in the ambience -- hard work and team spirit. 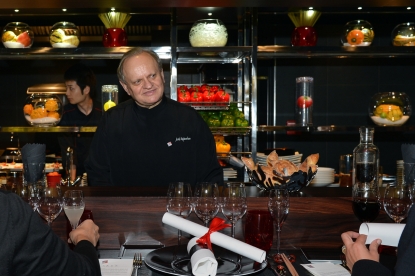 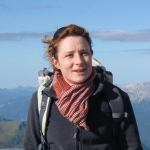 Deputy chief photo editor for France
All posts
Next post

The sudden outbreak of peace