Two Eritrean sisters reunite after two decades at the airport in the Eritrean capital on July 19,2018, in the wake of resumption of ties between Ethiopia and Eritrea following 20 years of conflict and war that separated families and friends. (AFP / Stringer)

The sudden outbreak of peace

Asmara -- I was standing on the main drag of Eritrea’s capital Asmara when a man in a cream-coloured suit approached me, begging for an interview.

Wearing black shoes with worryingly sharp metal points, the man was an Ethiopian who had come on one of the first flights between the two countries since the long-time foes restored ties last month.

All he wanted to talk about was how happy he was that Ethiopia and Eritrea had finally buried the hatchet after 20 years of conflict.

But he refused to utter a word about his past as an air force pilot, which, given his age, meant he probably used to bomb the very country he had now come to visit.

And so it went during the six days I spent in Eritrea in July, covering something that doesn’t seem to happen much these days -- the sudden outbreak of peace. 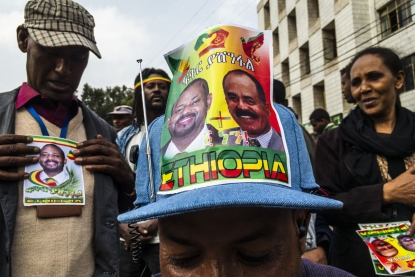 A man wears a hat with the photos of the Eritrean president and the Ethiopian prime minister, as people celebrate the arrival of Eritrean leader to Addis Ababa on July 14, 2018 in a historic visit to cement peace, days after the two nations declared an end to a two-decade conflict. (AFP / Stringer)

That I was there at all was remarkable.

The country is one of the world’s most closed to the press and my colleagues and I were the first reporters from AFP admitted in five years.

Even more surprising was that I’d come along with a bunch of Ethiopians on an Ethiopian Airlines flight.

For the past 20 years, the two countries haven’t been on speaking terms. They have a long and tortured history but the current trouble started in 1998, when a border dispute turned violent and led to a bloody war that ended in 2000.

They then stared each other down for another 18 years after Ethiopia refused to cede Eritrean territory taken during the war in violation of a ruling by a UN commission that demarcated the contested border. 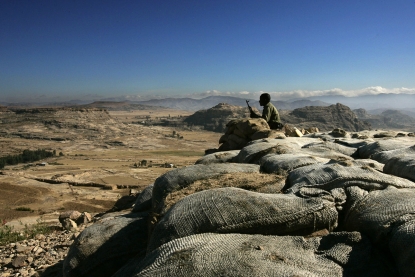 An Ethiopian soldier mans an observation post facing the Temporary Security Zone on the Eritrean border at the northern town of Zala Anbessa in the Tigray region of Ethiopia, 19 November 2005. (AFP / Marco Longari)

People called the years of stalemate “no war no peace”, and it was made all the more bitter by the close cultural and ethnic relationships between the countries.

Eritrea was once part of Ethiopia, and even after its 1993 independence following a decades-long war, families and friendships remained intertwined.

Two months later, he had it: after announcing Ethiopia would hand over the disputed Eritrean territory, he signed a peace pact with Eritrea’s President Isaias Afwerki.

Not long after that, I and two AFP colleagues were among a group of journalists on one of the first Ethiopian Airlines flights to Asmara since the war.

I’m going to remember all kinds of things about that flight, from the dancing in the aisles, to the musicians who pulled out traditional Ethiopian instruments as soon as the fasten seat belt sign went off. 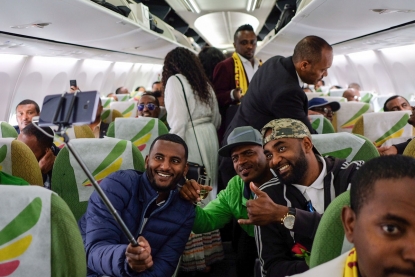 Passengers pose for selfies aboard a flight by Ethiopian Airlines to Eritrea on July 18, 2018, the first commercial flight in two decades between the two countries. (AFP / Maheder Haileselassie Tadese)

But what I’ll remember most is how I realised the lasting damage the war wrought on both Ethiopian and Eritrean societies.

Onboard were people going to Asmara to find brothers, cousins and friends they’d been separated from for years, after the two countries bluntly severed relations.

Many had assumed their loved ones were dead, only to hear from them just days earlier when Ethiopia and Eritrea reconnected phone lines that were severed when war erupted.

Our reception at Asmara’s airport was unlike any I’d experienced.

First there was a crowd of hundreds waving Eritrean flags and shouting “welcome” in three different languages. 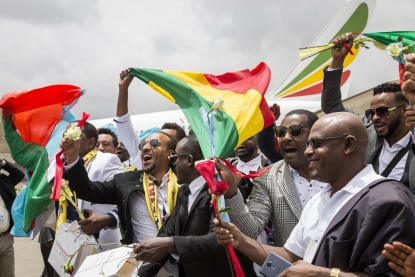 Passengers with Ethiopian and Eritrean flags celebrate on the tarmac after their arrival at Asmara airport on July 18, 2018. (AFP / Michael Tewelde)

Then there were the reunions: anxious people in the crowd rushing into the arms of loved ones whom they hadn’t seen in years or for decades.

People sobbed, howled, laughed, took selfies, and began the work of undoing the damage done by 20 years of conflict and cruelty.

My colleagues and I had been shooting and doing interviews on the plane and off, and once in Asmara we rushed to our hotel to do what journalists working for wires like AFP must always do: send as much of our material as fast as we can. 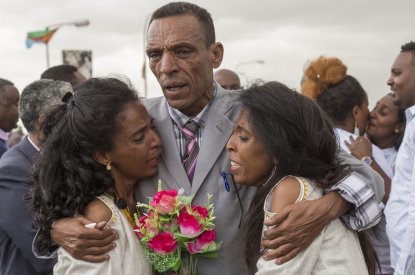 Azmera Addisalem and Danait Addisalem cry and hug their father, an Ethiopian journalist, at Asmara International airport on July 21, 2018, as they are reunited for the first time in 20 years. (AFP / Maheder Haileselassie Tadese)

It didn’t start off well.

The Internet in Eritrea is slow, likely purposefully so, and can only be accessed with a username and password sold at hotels and Internet cafes.

While everyone else on those Ethiopian Airlines flight was celebrating and reuniting, we and the other journalists who’d come from Addis Ababa were on a day-consuming quest for a connection speedy enough to send our videos and photos.

We eventually found it in a backroom in one of the few fancy hotels in Asmara, where an IT worker had a connection faster than most, and let us use it for a price.

This mad quest for Internet couldn’t have happened in a nicer place, as Asmara is one of the prettiest cities I’ve been to in a while.

It’s a city of quiet leafy streets, old villas built by Italian colonisers and coffee shops where men in suits sip macchiatos. The kind of African city you can actually enjoy walking around. 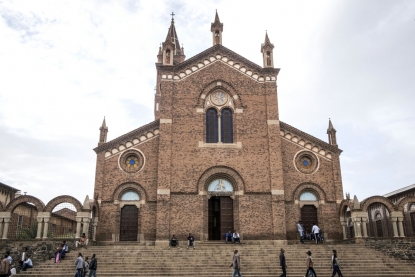 People walk past the catholic Church of our Lady of the Rosary in the Eritrean capital of Asmara, on July 21, 2018. (AFP / Maheder Haileselassie Tadese) 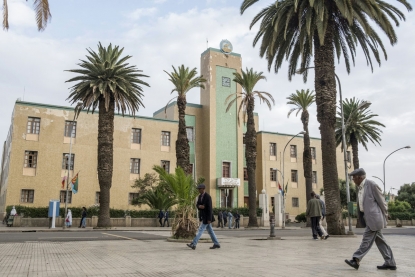 A man walks past a government building in the Eritrean capital Asmara on July 21, 2018. (AFP / Maheder Haileselassie Tadese)

Yet I was well aware of what was happening out of sight.

After the border war, Eritrea morphed into a fantastically repressive state.

Isaias ordered journalists, dissidents and politicians hauled to dungeons with no due process, and few have been seen since.

He also dismantled private media and refused to implement a constitution drawn up after Eritrea’s independence.

Today, most Eritreans are assigned jobs in a national service program that lasts forever, and prevents them from traveling abroad or switching professions.

Everyone from restaurant employees to civil servants to schoolteachers is enrolled.

There are few obvious signs of this repression on the streets of Asmara. 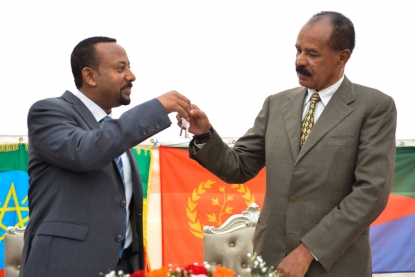 Much of the older generation, who fought in the independence war, spoke affectionately of Isaias and the sacrifices he made to liberate Eritrea.

Reminders of the independence war were everywhere.

The administrator of an art school, himself a war veteran, kept a photo of tanks arrayed for battle in his office, and one day I found a bookstore whose shelves were filled with locally published memoirs of the independence struggle.

But if you asked around, you could sense the discontent with Eritrea’s direction, particularly among the young. 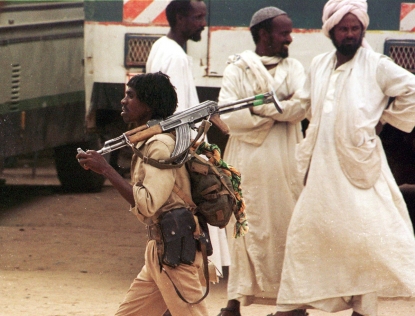 An Eritrean fighter leaving for the frontier with Ethiopia. (AFP / Amr Nabil)

Hundreds of thousands of Eritreans have fled the country in recent years, and in our time in Asmara, young people repeatedly confided to us that talk of leaving was widespread.

While we were never followed or obviously watched, we got the feeling that just about everyone was willing to inform on us, if not out of support for Isaias, then out of fear of what would happen if they didn’t.

Once, while interviewing a businessman, I asked if he felt Eritrea was isolated.

An employee of his who was translating batted my question down. Too political, she said. We don’t want any trouble. 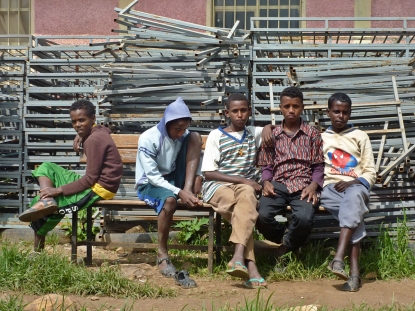 It became clear after arriving in Asmara that word was out that a large group of foreign journalists, many of them Ethiopian, was in town.

At our hotel, all kinds of people would seek us out, with my two colleagues, both Ethiopians, receiving particular interest.

In the mornings, I’d often spot them in the lobby chatting to strangers wanting to explain Eritrea’s perspective on the border dispute, or the fine details of its political system. The questions asked of my colleagues often seemed geared towards sussing out their own politics.

One night, a wealthy businessman drove me and some other foreign journalists around Asmara, pointing out the architecture, buying us coffee and insisting that Eritreans were much less materialistic than Ethiopians before showing us his antique car collection. 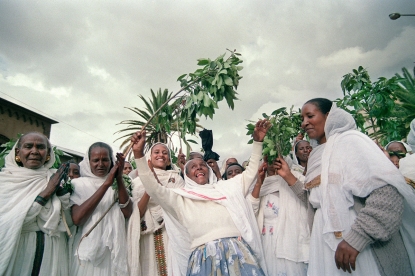 A group of women sing and dance in the street on 25 April, 1993 in the Red Sea port of Massawa, celebrating the results of a referendum that made Eritrea independent from Ethiopia after a 30-year civil war. (AFP / Alexander Joe)

Our days in Eritrea were full of curious and genteel moments like this.

The longer I stayed, the more I realized that, for me, this wasn’t simply a reporting trip in a country that exerts an unusually absolute grip on its people.

I found myself a bystander to the real-time healing process between two countries with a long history of animosity.

Strolling around Asmara, I watched random Ethiopians being stopped in the streets by Eritreans they’d never met and treated like long-lost family.

At meals, restaurant owners would emerge to greet my colleagues, often in their national language, Amharic.

The trench warfare and cluster bombings of the independence and border wars no longer seemed to matter. Everyone was happy to see Ethiopians again. 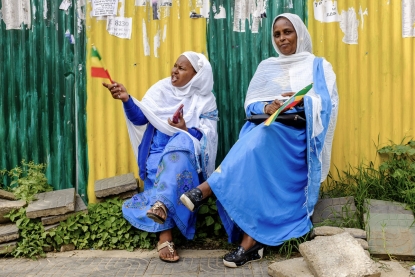 Women hold flags of Ethiopia to celebrate the arrival of Eritrean President in Addis Ababa on July 14, 2018. (AFP / Stringer)

After a few days, the receptionist at my hotel confided that the first call he’d received from Ethiopia after phone lines were reconnected was me: a random American guy, looking for a room. I couldn’t help but feel that I’d disappointed him.

It’s been a couple of weeks since I got back to Addis Ababa. I wonder what Asmara is like now.

The city is, in many ways, frozen. There’s not much moving, being built or changing. It’s beautiful, but not in a way that speaks of prosperity.

Many Eritreans seemed to believe the return of Ethiopians would be the start of a brighter future, perhaps one with the freedom to choose one’s job, and make one’s own life.

But obstacles remain. The two countries had a host of minor disputes that were never resolved in the five years of detente following independence and before the border war broke out.

And the Ethiopian experience since the conflict — years of economic growth, skyrocketing population and worsening ethnic tensions — stands in stark contrast to Eritrea’s quiet, principled malaise.

Isaias used the fear of Ethiopian aggression as the justification for his harshest measures. That’s over now. But there’s no guarantee the relationship between the two countries won’t become rocky again.

Still, one can only hope that perhaps Ethiopian friendship will convince Eritrea’s government to make the changes its people say they want to see. 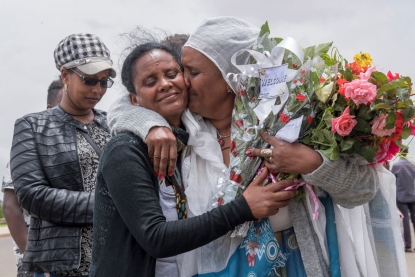 Journalist based in Addis Ababa
All posts
Next post

The white coffin of Genoa

Mashed potatoes in the hautest cuisine