The luck of the draw

Aweil, South Sudan -- The challenge when telling the story of a food crisis is not only to show the children suffering from malnutrition, the children with the ribs showing. They are part of the story and perhaps the part that gets the most reaction as it is so heartbreaking. 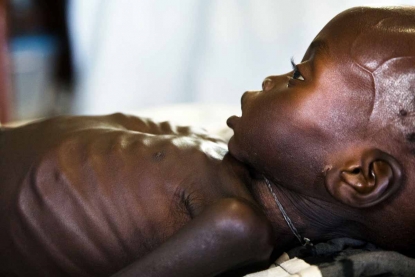 The complexity of the problem

But there is so much more.

There are the people waiting for food, the people collecting leaves off trees to eat, the people eating cane because there is nothing else. My challenge as a photographer is to capture all of these images, to convey the complexity of the problem.

When famine was declared in parts of South Sudan last week, the world’s first in six years, the news made headlines. But the people on the ground in the war-wracked nation knew it was coming.

Food shortages have been a feature in this young country for quite a while. Civil war engulfed it just two years after it became independent in 2011. Tens of thousands of people have died, more than three million have been displaced, but despite repeated attempts at a peace deal, fighting has basically raged on. 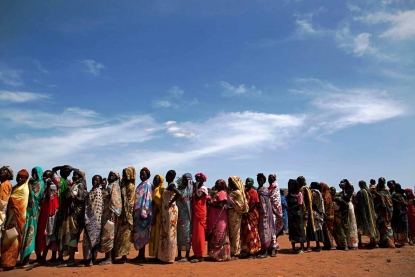 People displaced by the clashes in surrounding villages wait to be registered by international aid organizations in Wau, South Sudan, May 11, 2016. (AFP / Albert Gonzalez Farran)

Aside from the killing and violence, the war has meant a severe disruption in food supplies. Famine doesn’t just break out suddenly. You have gradual phases of food shortages and the malnutrition that results. Already back in the fall, food experts warned that the food insecurity, which was already dangerously high, could get much worse in 2017. So when I had a chance to travel to the Bahr el Ghazal region, where the situation was critical, I jumped at it.

I have photographed malnutrition and food crises before. I spent five years working for the UN in Darfur, I photographed the issue in Ethiopia, and even in southern parts of Peru, I touched upon the issue, when I photographed very poor communities where it is very difficult to feed children.

But I’ve never seen the problem on this scale before. In terms of the numbers of people affected, this is the biggest I’ve witnessed. According to the UN, some 100,000 people are facing starvation in South Sudan and another one million are on the brink. The numbers are just incredible. 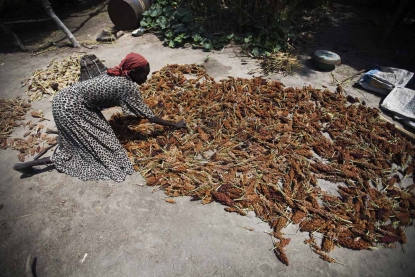 On the ground, you can see that the people are really, really suffering. And the worst thing for me is the lack of hope. In my experience, even in the most dreadful situations people still have the attitude of ‘let’s hope that something will happen and things will improve.’ But not here. People are really tired here. They just don’t believe anymore in a future for this country.

When working on a story like this, there are so many times when you see things that get to you. 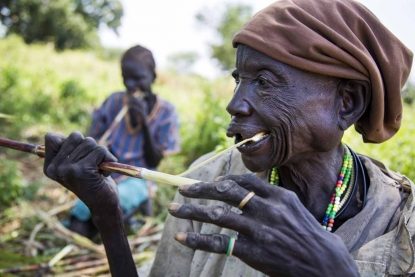 When I see an old woman eating cane, that gets to me. 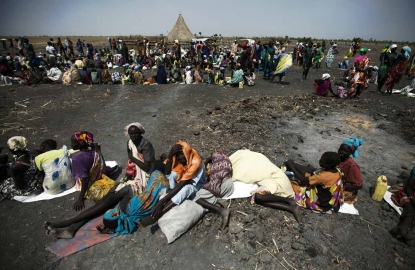 Waiting for food air drops by the International Committee of the Red Cross outside Thonyor, February, 2016. (AFP / Albert Gonzalez Farran)

When I see starving people lining up and waiting patiently for food handouts, that gets to me. 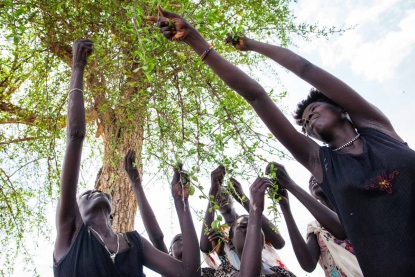 When I see people collecting and eating leaves off trees to put something in their stomachs, that gets to me.

And then of course there are the children. 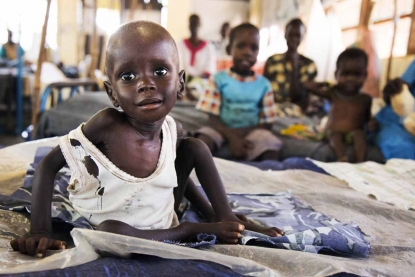 One of the things that will stick with me for a long time is a scene at a clinic in a very rural area in the northeast of the country. Most of the children suffering from malnutrition don’t just suffer from that. Malnutrition comes with other diseases and most children have a range of problems.

There was one baby, seven months or so, who was having respiratory problems and was on a respirator. And while I was photographing, the clinic’s generator stopped working. Which happens very often. So there was no power and that little baby passed away, right in front of us.

As I stood there, I thought how lucky some people are to have been born in certain countries. People who are born in a country like South Sudan simply don’t have access to many basic things that we just take for granted, like food or basic services like electricity in a clinic. 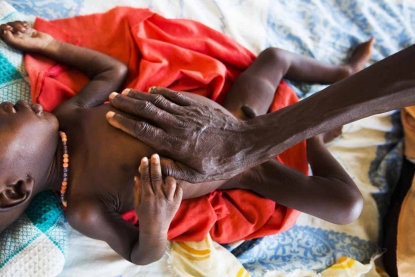 A 11-month-old boy with severe malnutrition with his mother at a hospital in Aweil, October 9, 2015. (AFP / Albert Gonzalez Farran)

As a photojournalist, that’s one of of the things that has shocked me the most. Where you are born, it makes all the difference. And this particular baby just wasn’t lucky to be born in South Sudan.  It just makes you realize how lucky you are.

I’ve been based in Juba since September 2015. I have mixed feelings about it.

On the one hand, the country and the people are amazing. There is so much potential, so many stories that need to be told. That’s why I came here. I had -- still have -- a headful of stories that I would like to do. 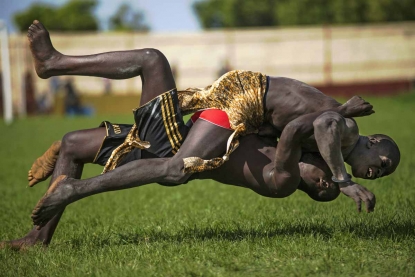 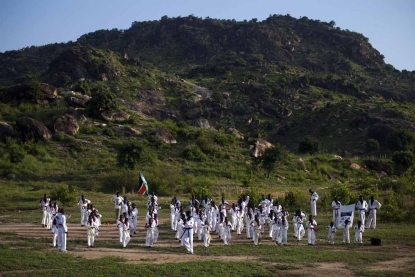 But on the other hand, it’s been very disappointing because I haven’t been able to do most of them because of the security situation. You don’t have much freedom to move around. At a certain point, it just dents your motivation when you can’t do things that you would like to do. And the lack of hope. I can see from the people that they have lost all hope for the country. That’s why there have been so many people who have just left. And that’s really disheartening. When you see the hopelessness.

Another striking image is from a children’s hospital in Juba. I had shot images of a mother and child who were having serious problems but had been recovering. I was planning to follow up on that case, to develop a successful story. But when I was planning to go to the hospital a few days later, I was told that the child passed away. I don’t know why, but for me it just symbolized the lack of hope here. 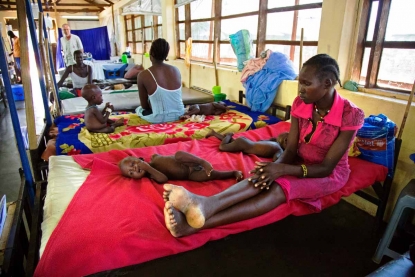 Women with their malnourished children at an MSF clinic in Aweil, October, 2016. (AFP / Albert Gonzalez Farran)

I have witnessed death several times already and it’s really sad to see children dying. But I don’t think about it when working. Otherwise I wouldn’t be able to work. You go about your job as you would normally. You can’t let your emotions take over in this type of situation.

'That's when it hits you... you realize just how lucky you are."

That’s when your experience comes in. I’m pretty sure that if I were 20, I wouldn’t be able to work in this type of situation. But because I have seen this so many times, I suppose that I have become a bit more used to it. Not that you ever actually get used to it.

After you finish working, that’s when it hits you. That’s when you think about it. After work, that’s when the emotions come and you realize just how lucky you are. 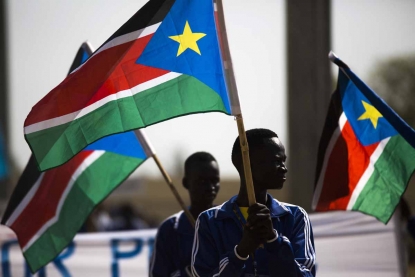 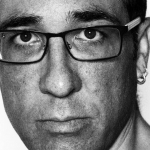 Freelance photographer based in Juba.
All posts 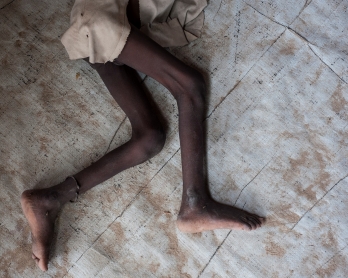 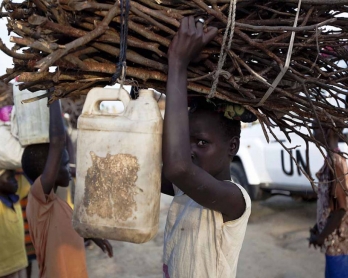 Not much trouble at all