Tangier, Virginia, USA -- Photographing the disappearing island of Tangier was a strange experience in several ways. Although the island is steadily sinking into the Chesapeake Bay on the eastern coast of the US, you find very few climate change believers among its nearly 500-strong population. Then there is the social aspect -- gender roles are so strictly defined that it’s a bit like stepping back into the 1950s. And then there is the language.

I have wanted to do a story on the island for a long time. Lying about 100 miles (150 kilometers) southeast of Washington DC, it is estimated to have lost two thirds of its land mass since 1850, so it seemed like a good way to tell the story of climate change -- it’s one of the few places where you can actually see it in action. 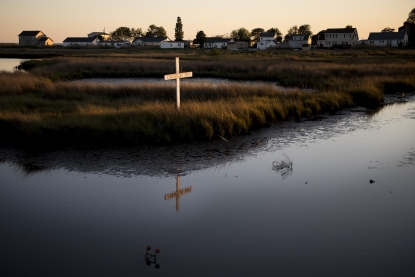 The sun sets on a cross reading Christ is Life on a waterway in Tangier, Virginia, May 15, 2017, where climate change and rising sea levels threaten the inhabitants of the slowly sinking island. (AFP / Jim Watson)

To get to the island, you need to take an hour-plus ferry. And I remember thinking as we were on it: “Why would anyone want to live here? It’s so isolated.”

Pretty much everyone here (the men, that is) is what they call a waterman -- going out on the water to catch mostly crabs, along with some oysters. Other than crabbing and maintaining your home, there is very little to do. 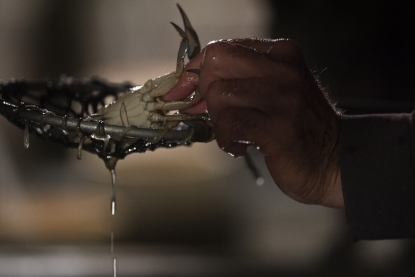 Mayor and waterman James Eskridge checks on his soft shell crabs at his shanty during the early morning in Tangier, Virginia, May 16, 2017, where climate change and rising sea levels threaten the inhabitants of the slowly sinking island. (AFP / Jim Watson)

Everyone is very close-knit. Everyone has their place. The women’s place is at home and the men’s place is to go out and crab. The women also run the tiny bit of tourism that the island sees. In the summer, pretty much every day a ferry boat comes in, filled with retirees, who have lunch and go through the gift shops before boarding the ferry again to go back to the mainland.

The mindset here just jumps out at you at times. I went to do this story with my video colleague Eleonore Sens. The first thing we did when we got there was to rent a golf cart -- it’s the way most people get around, as there are very few cars. So we rented one from the mayor, James ‘Ooker’ Eskridge (like I said, it’s a small place). And Eleonore was so excited to drive one. So when he was giving us the keys, I handed them to her. And the mayor looked at me and asked, “You’re going to let her drive?” He was dead serious. It was a bit of a surreal moment.

The people on the island lead a hard life. The men get up at 4:30 in the morning and go out on the water and crab until 1 or 2 in the afternoon. Then they come back, do odds and ends. Their day ends at 8 or 9 at night and the next day they start all over. 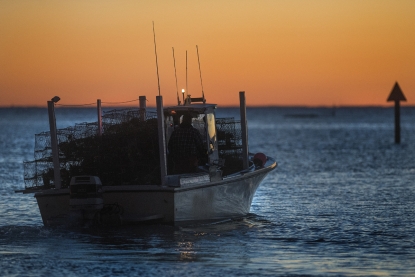 A waterman sets out to set crab traps as the sun rises in Tangier, Virginia, May 16, 2017, where climate change and rising sea levels threaten the inhabitants of the slowly sinking island. (AFP / Jim Watson)

When I say the island is close-knit I mean it. It was apparently settled by several families from Cornwall and Devon in England in the 1700s and 1800s and to this day, there are five or six main last names that you encounter here -- the Pruitts, the Parks, the Pritchards, etc. Everyone knows everyone.

A twang of their own

They even speak differently. Every day, a handful of men -- the elders if you will -- go into what they call “the situation room” after coming in from the water, where they discuss the day’s events and chat. One of the islanders told me it was their equivalent of someone on the mainland going into a coffee shop to chat with their friends. So they are all sitting around, smoking cigarettes and talking. And when they get going, they slip into this local slang that’s almost their own language. Eleanore and I couldn’t understand anything. I read later in the New York Times that the accent, “a Colonial-era Cornwall patois wrapped inside a Virginia twang… has long drawn the attention of linguists and anthropologists.” 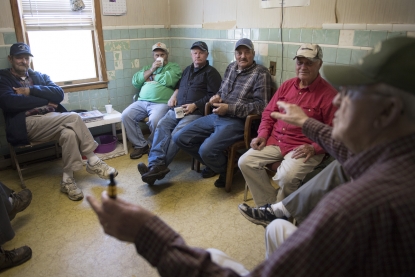 We spent three days on the island and the isolation of it really came through. They have television and internet, but very little cell service. We only managed to get a slight signal in a tiny corner of the island. So that was definitely strange, being off the grid like that. Especially for us -- being in the media, we’re constantly checking our phones for emails, breaking news, etc. While there, I kept instinctively reaching for my phone, but the only connection I had with the outside world was when I would call my wife.

That was bizarre, but at the same time kind of refreshing and peaceful, to have a break from all of that. But I couldn’t imagine living like that all the time.

'There is nothing to do here'

Some say the isolation will eventually kill the island off, before the water has a chance to. When we were coming over, the ferry master told me that in a generation, everyone will be gone, because the young people don’t want to stay and go on the water like their parents. And to be honest, I can see his point. There is very little to do there. One day, we talked with a man who was teaching his teenage grandson, I think he was about 13, how to crab. And I asked the kid what he did when he wasn’t in school. And he looked at me and said, “Nothing. There is nothing to do here.” 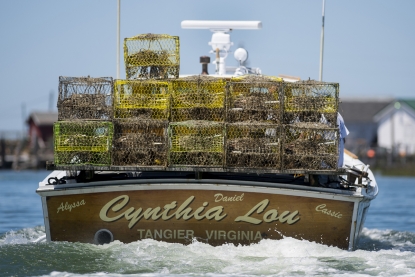 A waterman returns to the harbor with crab traps in Tangier, Virginia, May 16, 2017, where climate change and rising sea levels threaten the inhabitants of the slowly sinking island. (AFP / Jim Watson)

The people who live here tend to be very devout Christians, exemplified perhaps by what Carol Pruitt Moore said to us when we were checking out rising waters one day: “God is everywhere, but he lives on Tangier.”

The signs of the rising water were everywhere. The island is only four or five feet above sea level at high tide. People would tell us how homes that never used to flood were now regularly flooding. A northern part called the Uppards used to be part of the island, but now you have to take a boat to get there. We were at one lady’s house and went to the beach with her. It took us just a few minutes. And she said that when she was little, it would take her a half hour to walk to the beach. That really brought it home, how quickly the water was encroaching on these people’s homes. 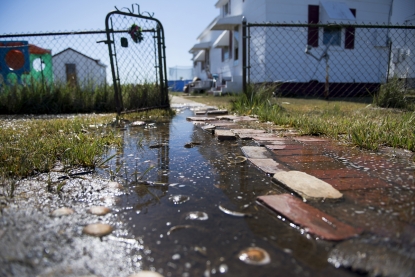 Sea water collects on the front walk way of a home in Tangier, Virginia, May 15, 2017, where climate change and rising sea levels threaten the inhabitants of the slowly sinking island. (AFP / Jim Watson)

Even though the island is slowly disappearing, it is solidly pro-President Donald Trump, who has called climate change into question and pulled the US out of the Paris climate accord. More than 80 percent of people here voted for him. Most people here don’t think the rising water is because of climate change, but because of erosion. They think the best solution would be a sea wall to protect them.

Pinning their hopes on Trump

And many of them see Trump as a guy who can just get it done, get rid of government regulations and just build a wall to save their island, after years and years of bureaucratic red tape. They told me that they have had numerous studies done on their island by numerous agencies. But studies take time. And often by the time one would come out, the situation had changed. They thought that if they voted for Trump, he would just get rid of all the regulations involved and just fix the problem. 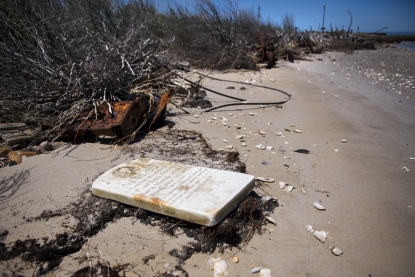 A grave stone rests on the beach where a cemetery once stood but has been washed away due to erosion in an area called Canaan in Tangier, Virginia, May 16, 2017, where climate change and rising sea levels threaten the inhabitants of the slowly sinking island. (AFP / Jim Watson)

They were also hoping that all the press coverage of their island (CNN did a story shortly after us), would bring their problem to Trump’s attention. And apparently it did -- a few weeks after our visit, a local newspaper in Maryland quoted the island mayor as saying that Trump called him after seeing the story in the media. And he apparently gave them the reassurance they were looking for. “He said not to worry about sea-level rise,” The Salisbury Daily Times quoted Eskridge as saying. “He said, ‘Your island has been there for hundreds of years and I believe your island will be there for hundreds more.’” 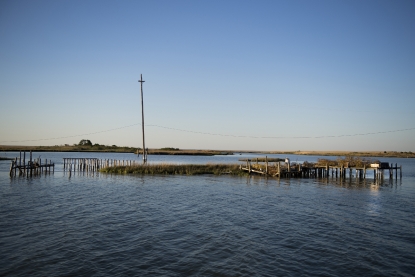 Supports jet out of the water where crab shanties used to stand on a patch of land now surrounded by water in Tangier, Virginia, May 15, 2017, where climate change and rising sea levels threaten the inhabitants of the slowly sinking island. (AFP / Jim Watson)

To me, I couldn’t understand why they kept living there, fighting what seemed to me a losing battle against Mother Nature. It seemed to me that you could crab just as well on the mainland, where your homes won’t be swallowed up by the water.

They seemed like a very determined lot -- this is our land and we are staying. Their determination to hold on to their home was formidable and impressive. 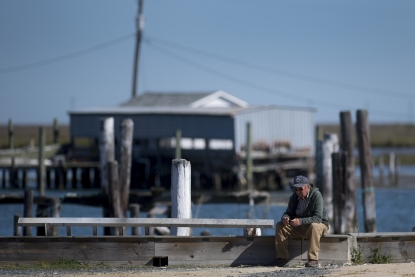 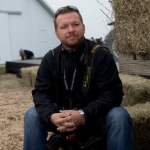 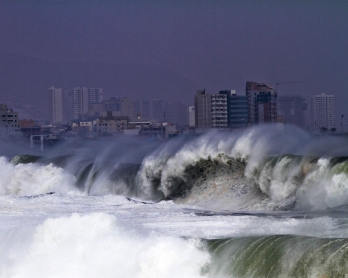 At the trial of the "Butcher of Lyon"