A zoo employee 'tranquilises' a worker in a snow leopard suit during an escape drill at Tokyo's Tama zoo on February 10, 2015 (AFP Photo / Toshifumi Kitamura)

TOKYO, February 11, 2015 – Tama zoo is on red alert. More than 50 zookeepers, backed up by police and emergency services, are mobilised to contain a terrible threat. A snow leopard has escaped from the Tokyo wildlife park, and must be stopped before it devours a child.

Except the children on site are clearly having a great time. Unlike the grown-ups who are taking this all very seriously, it’s obvious to them the runaway feline is a zoo employee in a cute (“kawaii”, as the Japanese say) costume. Think Pokemon meets Hello Kitty.

But don’t mistake this for a comedy routine. It’s a highly serious safety drill, carried out each year by one of Tokyo’s two main zoos. The scenario is always the same: a bloodthirsty beast bursts through a police cordon and bolts for freedom, before it is brought under control with a tranquiliser dart.

The only variation is the costume. Last year, a gorilla decamped from Ueno zoo in central Tokyo. The year before? A zebra gone wild sowed terror in Tama park.

Beyond the goofy attire, the funniest side to the drill is how deadly serious its participants are. But what is the point of it all?

“In case of an earthquake, a tree could very well come down on a cage. If an animal escapes, it’s our duty to act as fast as possible –that’s the goal of the exercise,” explains the Tama zoo manager, Yutaka Fukada, unflappable. “We think it’s highly important, and that’s why we take this drill very seriously.” 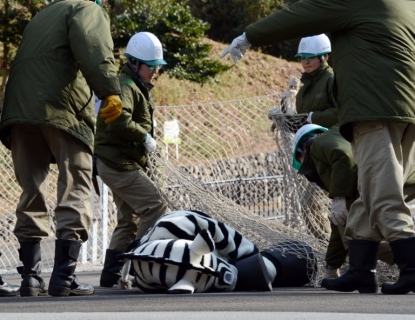 After the battle is over, the star of the show peels off his leopard mask. The speckled white fur suit looks like something out of a drag queen show.

“Don’t you think it might work better with a slightly more realistic costume?” asks a journalist, with more than a hint of amusement. But the “leopard”, who has doubtless been training for this for months, is in no mood for joking. 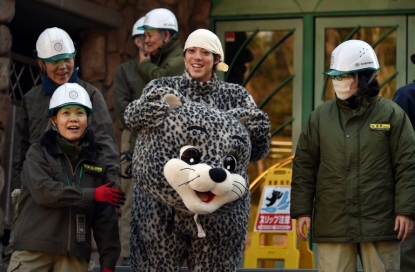 Of course the choice of costume is no accident. Every year dozens of Japanese and international media turn up to cover the quirky “escape” ritual – giving Tokyo’s two zoos a fantastic publicity boost in the process.

Using the bizarre as a public relations tool is a very Japanese concept. Take this recent stunt by a specialist firm that makes 3D replicas of human organs:  it offered expectant mothers a 3D model of their foetus, to keep as a souvenir - or use as a key ring. The oddball PR coup put the unknown company firmly on the map.

The reason we journalists turn up to cover the Tama zoo getaway is not, let’s be honest, to highlight the diligence of its officials. It’s because watching a squad of professional police chase frantically after a guy in a stuffed animal suit, is just so much fun. So why not?

Antoine Bouthier is an AFP video journalist based in Tokyo