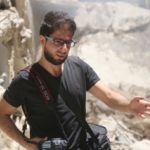 In September, we brought you a blog, Covering Syria through hunger and fear, in which AFP’s Aleppo’s correspondent, Karam al-Masri, gave an idea of what life was like in the besieged city and Rana Moussaoui, AFP’s deputy bureau chief in Beirut, shared what it was like to hear from Karam each day.

Below they tell of the Karam’s harrowing last days in Aleppo, the final chapter of his years of reporting from the ravaged city.

For Karam al-Masri, AFP's reporter, photographer and videojournalist in rebel-held Aleppo, the past five years have been a series of tragedies: detention by the regime, and then the Islamic State group, the death of his parents in an air strike, the siege of his hometown, hunger and bombardment. Though it all, he has continued to report, with unwavering courage, the story of his ravaged city.

Herewith his story, in his own words and those by Rana Moussaoui, his colleague in Beirut who works with him daily.