Brave, committed, humble, fun and a great reporter. Colleagues remember the American journalist James Foley, who has been executed by jihadist militants.

WASHINGTON, August 20, 2014 - American journalist James Foley was a beloved companion to colleagues in dangerous corners of the Middle East and battled to tell the human stories of civilians caught up in chaos.

The 40-year-old freelance reporter was kidnapped in northern Syria in November 2012 and held for almost two years before he was executed by jihadist militants, but he had already touched many lives.

Colleagues from across the world's media paid tribute Wednesday to the bravery, compassion and good humor he brought to his chosen task, shining light on communities trapped in the darkness of war. 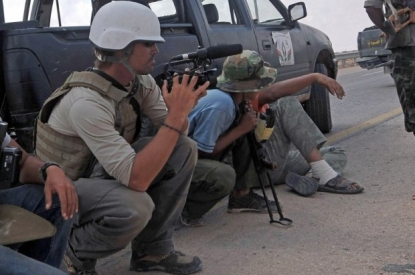 James Foley (L) on the highway between the airport and the West Gate of Sirte, Libya. September 29, 2011. (AFP Photo / Aris Messinis)

"A handsome lad, his chiseled features always coupled with a smile, he was inseparable from two other freelancers," she said.

"All three had been kidnapped in Brega by Kadhafi loyalists in April and held for a month, but that didn't stop them coming back to Libya to cover the fall of the final stronghold," Benoit said.

"One evening my astonishment got the better of me. Why had he wanted to come back? James responded shyly, but with his smile. It had seemed obvious to him -- he needed to see the story through to the end.

"He wasn't foolhardy, just a stubborn reporter. He did the right thing: On October 20 he was one of the few journalists on the ground in Sirte to cover Kadhafi's capture and execution." 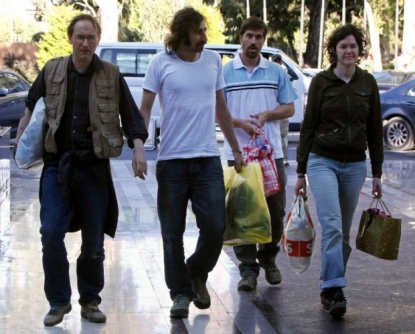 (L-R) Freed journalists Nigel Chandler of Britain, Manu Brabo of Spain, James Foley of the US and his compatriot Clare Morgana Gillis arrive at Rixos Hotel in the Libyan capital Tripoli on May 18, 2011 following their release. (AFP Photo / Mahmud Turkia)

It also gave Foley pause for thought, as he explained to student journalists from his former college the Medill School of Journalism after his return.

"When you start to take risks, when you have a close call, you really need to look at that," he said. "It's not worth your life."

But, when the young would-be reporters asked why he chose to work in such areas, he explained: "There's an amazing humanity in these places."

"Images of a dumbfounding violence of a civilian population under a deluge of tank shells," he said, recalling Foley's bravery and resourcefulness in shooting and transmitting footage from the most difficult of places.

"With a discreet little camera, helmet and bullet-proof vest, James Foley was able to slip into the frontlines, often meeting fleeing refugees coming the other way, sometimes taking shelter with them when the shelling was intense. 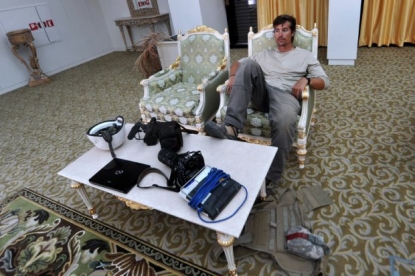 "His images often spoke for themselves, but his accompanying mails always mentioned the names of those he had interviewed and even of those he filmed after they had died under the bombardment.

"For him, no victim was anonymous, he made it a point of principle to find out their names, to gather information about their lives."

Foley's work in Idlib was not forgotten by the Syrian people there, either. The day after his death was announced, a picture began circulating on Twitter of men carrying the flags of the Syrian rebellion and a tribute banner.

"Humanity is proud of James: The Syrian Revolution, Idlib countryside, 20 August 2014," it reads, praising Foley for his work to expose the brutality of both Bashar al-Assad's regime and its Islamic State rivals.

AFP chief video editor Henry Bouvier said Foley captured "moments when humanity gained the upper hand over war, such as a marriage in Aleppo in the dead of night between a rebel and a nurse as bombs fell in the distance."

Fellow AFP journalist Fabienne Bruere, worked with Foley over shaky email and telephone links from the field for six months before finally meeting him in person in Antakya, Turkey shortly before he crossed into Syria for the last time.

"He didn't hesitate to travel tens of miles simply to put a face to my name, to grab a drink together," she recalled.

"I found a man who was the very image of his emails: down to earth, cheerful and modest. It was a few days before he disappeared." 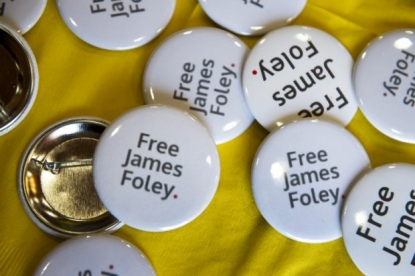 Buttons in support of James Foley are displayed during a panel discussion about the importance and dangers of reporting on world conflicts at a Free James Foley event on May 3, 2013 in Boston. (AFP Photo / Don Emmert)

Dave Clark is an AFP news editor and the head of desk for North America.