Afghan women ride in the back of a taxi in a street in Kandahar on September 16, 2013. (AFP Photo / Siddiqullah Alizai)

KABUL, August 19, 2014 - Late one night in AFP’s Kabul bureau, I was leafing through my dog-eared notebook, bemoaning one of my biggest obstacles as a war reporter - my gender.

My Afghan colleagues had called it a day and I was alone in the bureau, slumped in a swivel chair by the window overlooking a garden festooned with red and pink roses.

I was more than half way through a 10-day reporting mission to Afghanistan and my notebook was full of passages, monologues and quotes gathered from the field. As I flicked the pages, it struck me that something was glaringly missing in my reporting - women.

By default rather than design, my interviewees were all male.

In a testosterone jungle that is Afghanistan, men tend to be territorial over their women and public mingling of the sexes is anathema under local cultural norms - even in post-Taliban times. So it isn’t entirely surprising a male reporter would have woefully limited access to female interviewees. 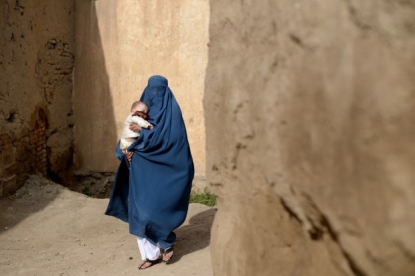 A burqa-clad Afghan villager carries a small child as she walks among a collection of destroyed buildings in the village of Deh Saqi on The Shomali Plains some 20 kms north of Kabul. (AFP Photo / Shah Marai)

Beyond the Kabul educated elite, my journalistic interactions were largely restricted to men. Women, especially in the countryside, are mostly invisible - and wherever visible, peering out of their turquoise-blue burqas, they remain strictly off-limits to male outsiders.

That night in June when I was ruing being a man in a man’s world, I had just returned from an assignment in the Shomali plains, an hour’s drive out of Kabul. It seemed like a throwback to medieval times, a haggard landscape akin to my notebook - women were completely out of sight.

I had travelled there with a photographer, a videographer and another bureau reporter -- an all-male crew -- to report on the aftermath of a high-stakes US-Taliban prisoner swap, which saw US Army Sergeant Bowe Bergdahl released after five years of Taliban captivity in exchange for five high-profile insurgents detained in Guantanamo Bay. 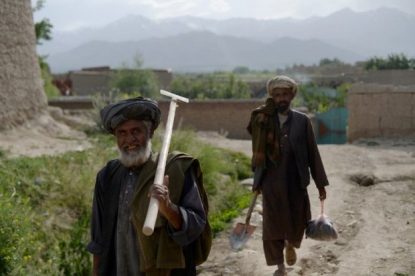 The swap left residents of Shomali villages seething with anger - one of those five insurgents stands accused of orchestrating industrial-scale carnage in the area in the late 1990s, burning down houses and vineyards and carrying out summary executions.

My reporting tapped into the rich seam of the male anger over the release of the Taliban figures. I toured one affected village with a bearded elderly resident, his prayer beads wrapped around his fist. He showed me around gutted homes and other scars of the carnage, his anger still raw, as my pen chased his runaway thoughts.

But every word that escaped his lips was loaded with a decidedly male perspective. The men were executed. The men were tortured. The men were forced to flee. And what about the women? What did they endure? How did they flee the bombs and mayhem with their children, if at all?

But of course the village elder was speaking for both men and women. Except that he wasn’t.

I imagined the invisible women I had no access to, sequestered in their mud-plastered homes or smothered behind curtains, deferential to the men in their lives. For a female perspective, I would have to enter homes to interview them. But in the countryside it's not customary to invite male strangers into Afghan homes - especially to speak to women. Transcending those high-wire cultural boundaries is never easy.

A female reporter is much less likely to face such a conundrum vis-à-vis male interviewees. I don't mean to be facile - women journalists face their own struggles in a war setting. But I can't help but be amazed at the irony of being the underdog male reporter in a male-dominated landscape. 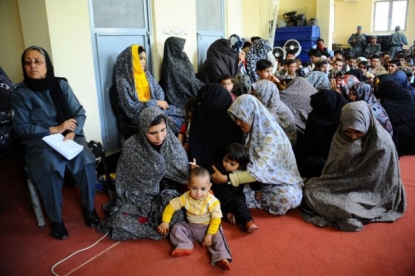 Women prisoners hold their children as they await release from a prison in Herat on May 6, 2014. (AFP Photo / Aref Karimi)

Loss of access to women is no small loss. Like life itself, reporting on war is spectacularly incomplete without the female perspective.

Last year during a reporting trip to Syria, I tried reporting on the rape epidemic afflicting the war zone - a touchpaper issue often spoken about in hushed tones. So strong is the social stigma attached to rape that chances of tracking down and interviewing victims, both for male and female reporters, are extremely limited.

But a woman reporter with a Canadian newspaper who got lucky with access emailed me this word of caution: "If you are looking (to interview) female rape victims I would say that no matter how sensitively you approach the story, as a man, to have these women talk will be extremely difficult."

She was right. Frustrated after hitting a dead end, I eventually had to drop the story. 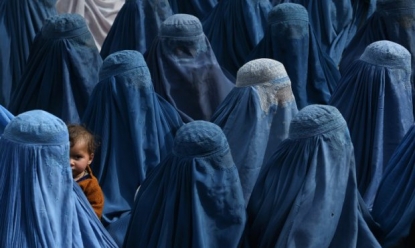 An Afghan woman holds her baby as she and supporters attend the election rally of Afghan presidential candidate Abdullah Abdullah in Jalalabad on February 18, 2014. (AFP Photo / Shah Marai)

Even setting up vox pops with women for a separate, much less sensitive story was a huge struggle. When I pushed my Syrian translator, his response was almost comical: "We'll get beaten up by their brothers and husbands."

In his light-heartedness, he struck at the heart of the problem: the attitudes of men. Such experiences aren't limited to Afghanistan or the Middle East.

In my home country India, men and women aren’t so tightly segregated, but power relations between the sexes in large parts still rooted in chauvinistic tradition are invariably skewed in favour of men. 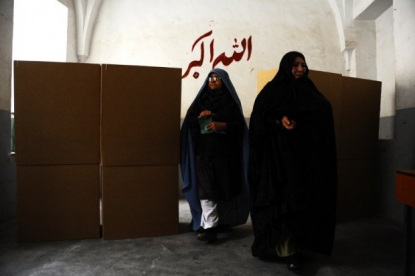 Afghan women leave voting booths after filling their ballots at a polling station in the northwestern city of Herat on April 5, 2014. (AFP Photo / Aref Karimi)

Questions directed at women often elicit responses from the men around them.

Women are often treated as window dressing, a side plot in a male-scripted narrative. Why should they reply when their men can do the talking for them, goes the thinking.

In an era where a male feminist is no longer an oxymoron, it isn't surprising that men, too, can lend gravitas and flair to reporting on women's issues.Perhaps I am biased but this feature on Afghanistan’s women cyclists - which I wrote later on in my trip - may be a befitting example.

Reporting in depth on their challenges and agonies was possible partly because I was accompanied in the field by a woman, American competitive cyclist Shannon Galpin, who is also mentoring the team.

Her presence proved to be a case study in gender-bending reporting tactics. The cyclists could skim over my shape, form and gender and just be themselves. The floodgates of emotion opened beautifully.

Someday I hope the gender barriers will crumble without help from a woman chaperone. 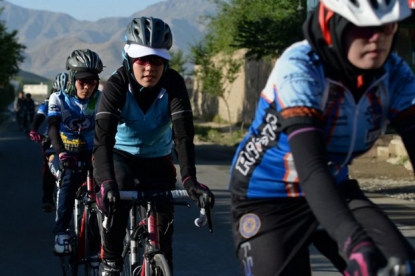