The Archbishop of Paris Michel Aupetit, holds the first mass in the side chapel, Chapel of the Virgin, just off the choir, two months to the day after a devastating fire engulfed the Notre-Dame de Paris cathedral on June 15, 2019, in Paris. - The Notre-Dame cathedral in Paris will host its first mass on June 15, 2019, exactly two months after the devastating blaze that shocked France and the world. For safety reasons, the mass led by Archbishop of Paris Michel Aupetit will be celebrated on a very small scale. Worshippers will be expected to don hard hats but priests will be wearing their ceremonial garb. (Photo by Karine PERRET / POOL / AFP) (AFP / Karine Perret)

Paris -- When I applied to cover the religion beat, I never thought I’d have to wear a helmet to do my job.

But when it’s the first mass celebrated at the Notre Dame in Paris after a fire ravaged much of the 850-year-old landmark, duty calls…

The mass takes place exactly two months after the fire and AFP is among only three media allowed to cover it -- the French Catholic KTO channel, the Catholic Ciric photo agency and yours truly, a text reporter from AFP. After extended negotiations in the days leading up to the mass, the cathedral authorities finally agreed to allow me to take some photos and videos as well -- 10 images and up to five short videos. 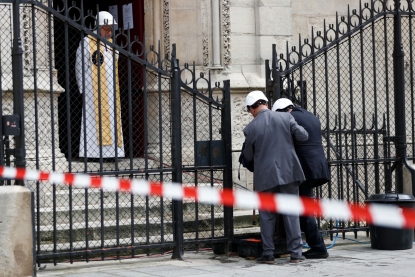 When I arrive at the cathedral at the end of the afternoon, the usual gaggle of tourists and onlookers are on the scene. I can see rows of white helmets lined up behind the security barrier.

To enter the church, we have to go through a footbath, to wash away any of the lead that was released during the fire. We wipe our feet, take our helmets and go inside. The steeple of the landmark Notre-Dame Cathedral collapses as the cathedral is engulfed in flames in central Paris on April 15, 2019. (AFP / Geoffroy Van Der Hasselt)

The first thing that hits me once we’re inside is the silence. It’s like time is standing still. The space leading up to the small chapel seems to have been just recently washed. It’s a bit humid. No trace of a smell of something burnt.

Access to the nave to the right is closed. In front of me, I see that the choir stalls are intact and piles of rubble lie on the floor. Above us is a spider’s web of netting, to prevent errant things from falling down below. I can see a hole where the roof once was, now covered by a giant tarp. In this file photo taken on May 15, 2019 in Paris shows a protective net in the Notre Dame de Paris Cathedral during preliminary work one month after it sustained major fire damage. (AFP / Philippe Lopez)

There are around 30 of us, the lucky few to be able to enter the cathedral so early after the blaze.  “Normally, I don’t get so many people for mass,” the archbishop tells me, smiling. “If the whole world is watching, I’m delighted.” You can understand his joy -- church attendance has fallen steadily in France over the past several decades. The percentage of the population identifying itself as Catholic went from 70 to 32 percent in the past 40 years, according to a “France in values” study published in May. 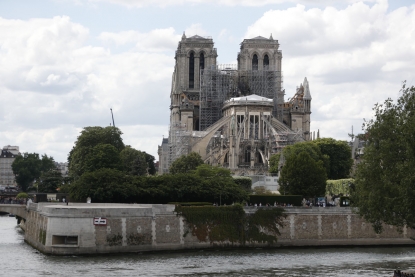 The priests assemble themselves in front of the golden cross and the pieta at the back of the choir space. “Look at how beautiful she is,” one of them tells me. Some take photos with their smartphones. The archbishop proudly shows me the famous statue of the Virgin and Child that moved the poet Paul Claudel to convert to Catholicism during a Christmas mass in 1886. The statue has become one of the symbols of Notre Dame. “Unscathed,” he says, beaming. A man holds a smartphone showing a live broadcast of Archbishop of Paris Michel Aupetit holding the first mass of the Notre-Dame de Paris cathedral on June 15, 2019, two months after the April 15 fire, in Paris. (AFP / Zakaria Abdelkafi)

Monsignor Pascal Gollnisch, a specialist of eastern churches, presents the archbishop with a gift -- a small cross sent by the Christian community if Syria’s city of Aleppo. It’s made from stones of that city’s cathedral, the roof of which collapsed following a bombing raid in 2012. As the cantor makes his last preparations, two cameramen of the Catholic channel, dressed in white jumpsuits, wearing masks, cameras on their shoulders, make theirs. It’s a somewhat surreal scene. 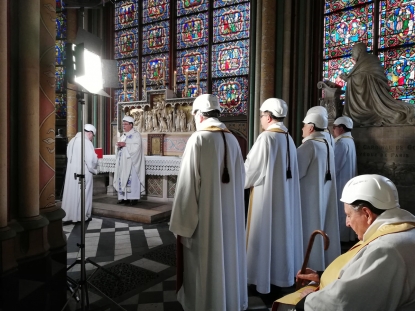 The Archbishop of Paris Michel Aupetit, holds the first mass in the side chapel, Chapel of the Virgin, just off the choir, two months to the day after a devastating fire engulfed the Notre-Dame de Paris cathedral on June 15, 2019, in Paris. (AFP / Karine Perret)

At 6:00 pm, the bells toll, the cantor starts to sing, the priests, wearing beige and gold robes and white helmets, take their place around the altar. The mass starts. I send a short factu from my computer and then concentrate on the visuals. The scene shows it all -- the religious robes contrasted with the consequences of the fire. I film with my smartphone ticking off the shots I need. Photo. Video. Wide scale. Close-ups. As I film, I try not to disturb the actual mass, attended by around a dozen of people working on the site. 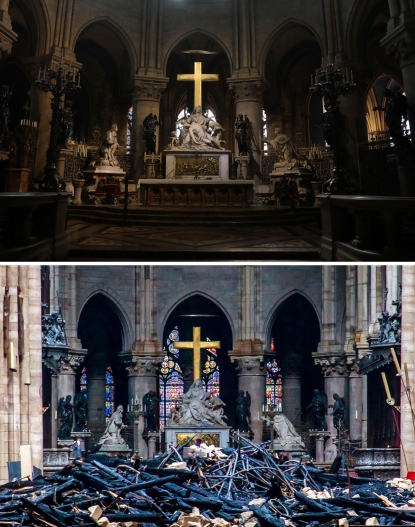 In this file combination of two pictures made on April 16, 2019 shows (Up) the heart and transept at Notre Dame de Paris Cathedral in Paris on June 26, 2018 and (Bottom) the same view of the Notre-Dame Cathedral in Paris in the aftermath one day after a fire ravaged it. (AFP / Ludovic Marin)

The mass lasts 45 minutes. Afterward, some of the priests look around. It’ll probably be a while before another service is held here… 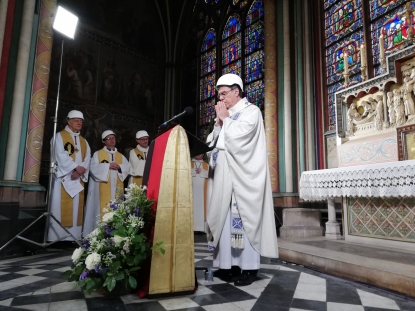 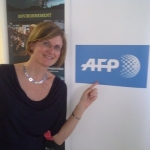 Journalist covering religion, based in Paris
All posts
Next post