Jalalabad, Afghanistan -- Of all the sad, wrenching things I have seen as a journalist in Afghanistan, Niaz Bibi’s house was probably one of the saddest.

At the age of 70, Bibi has found herself as the main parent of some 40 kids -- the children of her three sons and three grandsons who had been killed by the Islamic State. Bibi does the best she can, but she is so poor that they all live in conditions not much better than a jail.

“Have you seen my father?” some of the children asked me when I came to the house. They didn’t know their fathers were dead. They thought they were just away somewhere. They looked at their photos and counted the minutes until their return. In this photograph taken on April 16, 2019, Afghan woman Niaz Bibi (C in black), 70, and her orphaned grandchildren and great-grandchildren sit at their home as she holds a framed photograph of her sons killed by Islamic state (IS) militants in the Kot district of the Nangarhar province. (AFP / Noorullah Shirzada)

Is that what will happen to my children if I don’t return home one day, I thought to myself, tears running down my cheeks as I saw Bibi try to feed the hungry brood with just a few loaves of flatbread. Will they think I am still alive and wait for me to return?

Earlier, Bibi had taken me to a spot by the side of the road where IS fighters beheaded her sons in 2016. Tears rolled from her sunken eyes as she told me that she heard her boys screaming for mercy that day. None came.

An old man lay on a bed in a corner when I visited her house. “He is my husband and he went blind the day his sons were killed,” she tells me. So now she takes care of him and the dozens of offspring in her charge. 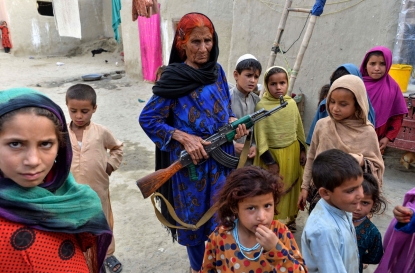 In this photograph taken on April 22, 2019, Afghan woman Niaz Bibi (C in blue),70, holds a weapon as she stands among her orphaned grandchildren and great-grandchildren at their home in the Kot district of the Nangarhar province. (AFP / Noorullah Shirzada) In this photograph taken on April 22, 2019, Afghan woman Niaz Bibi, 70, looks on as she talk about her sons killed by Islamic state (IS) militants in the Kot district of the Nangarhar province. (AFP / Noorullah Shirzada)

Everyone seems to have a story of IS cruelty in the area where Bibi lives. Afghand and US forces have pushed the jihadists back into the nearby mountains, but villagers say they are starting to make a comeback. The circle of violence, loss and revenge is such that it’s hard to see how Bibi’s family can ever break free from it.

“Though I have lost so much, if the war goes on like this, when they grow up, I will send all these orphaned children to serve their country and sacrifice their lives for their homeland,” Bibi told me.

I live in Jalalabad in eastern Afghanistan, where war rages between the Taliban and US-backed government forces and where the Islamic State is also on the rise. Afghanistan has been embroiled in war for the past 40 years, ever since Soviet troops invaded on December 24, 1979. First it was the Soviets fighting the mujaheddin, then the mujahideen fighting each other, then the Taliban took over, then the US-led invasion following the September 11 attacks.

And for 40 years, ordinary Afghans have been killed, wounded and tortured. A third successive generation of children is being traumatized. Thousands of people have been disabled in every corner of the country. In this photograph taken on April 28, 2018, Afghan children play on the outskirts of Jalalabad. (AFP / Noorullah Shirzada) 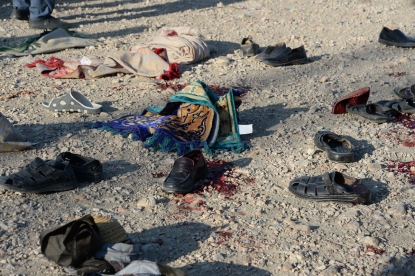 Belongings of blast victims lay in the ground at the scene of a suicide attack that targeted a funeral ceremony in Jalalabad on December 31, 2017. (AFP / Noorullah Shirzada)

Another was of a family with seven amputee children. In this photograph taken on May 3, 2019, Hamisha Guls sons and grandchildren, who lost their legs following unexploded rocket explosion, rest in their bedroom in Khogyani district of Nangarhar province. (AFP / Noorullah Shirzada)

This family’s story began with a walk to school in April 2018. A group of 10 kids from a village were walking to school when they came across a strange object lying on the ground. Curious, as children everywhere are, they picked it up and showed it to an aunt accompanying them. And then there was an explosion.

The curious object turned out to be an unexploded mortar -- a common sight in a country where decades of conflict have left it strewn with landmines, shells and bombs. The explosion killed the aunt and three kids. The remaining seven children all lost limbs.

When I heard about the accident, I rushed to the hospital to shoot the aftermath. When I got there, I saw the surviving kids lying on beds without legs and their relatives crying all around them. It was a difficult scene for me and I ended up feeling that something terrible had happened to my own family. 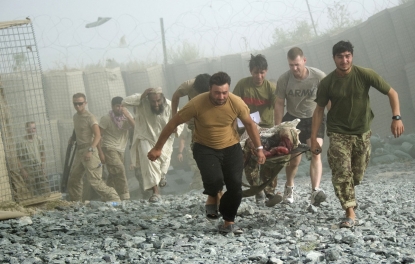 A boy is rushed to be airlifted to a hospital in Kandahar after being hit by an IED (improvised explosive device), August 25, 2011. The victim ended up losing a leg as a result of the blast. (AFP / Johannes Eisele) 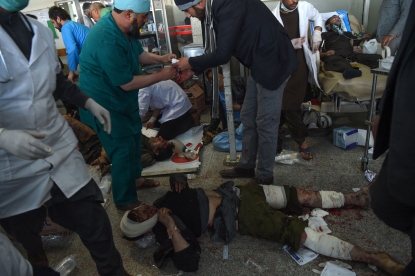 Aftermath of a car bombing -- medical staff treat victims of a car bombing in Kabul on January 27, 2018. At least 17 people died and at least 110 were wounded as a result of the bombing. (AFP / Wakil Kohsar)

The scene at the hospital shook me so much that I wanted to visit the children at home. But they live in a very dangerous area, patrolled by the Taliban, on the front lines of the conflict. The IS is also present in the area and its fighters have been known to mercilessly kill innocent people. Both groups don’t like journalists. The Taliban could either kill you or take you as a hostage on suspicion that you were a spy for the government or the US. The IS wouldn’t consider taking you alive; they’d just kill you on the spot. IS considers journalists American spies and tells their fighters that if they kill journalists, they’ll get a financial reward. A former Taliban fighter looks on after he joined Afghan government forces during a ceremony in Herat on on June 26, 2013. (AFP / Aref Karimi)

Nevertheless, I took precautions. In an ideal situation, I would have spent a full day at the family home, getting my footage. But that was impossible -- the Taliban and the IS would hear that a stranger was in the area and would kill or snatch me. The key to staying safe was to go several times for short periods, leaving before news of my presence could spread.

I ended up going to the house four times for 10 minutes each. I went in the afternoon, when the light was good. I would bring my brother or a friend. They would stay in the car, which I would leave around 800 meters from the house and watch out for men on motorcycles -- the preferred mode of transport for Taliban. 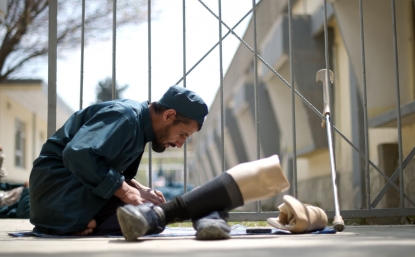 An Afghan amputee performs his prayers beside his prosthetic legs at one of the International Committee of the Red Cross (ICRC) hospitals for war victims and the disabled in Kabul on April 14, 2012. (AFP / Johannes Eisele)

The simple family home had been pockmarked by bullets. The children were hunkered down inside, afraid. The only thing they talked about was the explosion; they were clearly suffering from mental trauma.

At one point, the kids came outside and sat on a bench, where I filmed them rolling stockings over their stumps -- their scars had barely healed in the year since the blast -- and wriggling into their prosthetic legs. All of them were in pain and kept telling me, “our future is destroyed.” In this photograph taken on April 30, 2019, Hamisha Gul's sons and grandchildren, who lost their legs following unexploded rocket explosion, sit with their prosthetic legs outside their house in Khogyani district of Nangarhar province. (AFP / Noorullah Shirzada)

It was incredibly difficult to witness. The thing that got to me the most was when one girl, aged only six, told me that her dad had left the house a few years ago and never returned. She didn’t know if he was alive or dead.

Despite the danger in getting this story, I am glad I took the risk. I know that being a journalist in my country carries a risk. That I am playing with my life every time I leave the house. That my entire family worries about me until I return.

But it is important to get stories like these out to the world. These are not only the stories of two families. They are the stories of the entire country because every family in this country has seen people killed, wounded or displaced.

I worked on these stories to show what war really looks like. 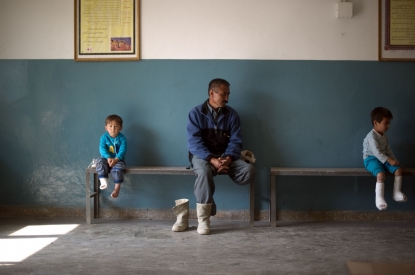 An Afghan amputee (C) sits in between children with plastered legs at one of the International Committee of the Red Cross (ICRC) hospitals for war victims and the disabled in Kabul on April 14, 2012. (AFP / Johannes Eisele)

So that people who want war to continue in Afghanistan can know that the victims are civilians. Women and children. Thousands of people have been disabled in every corner of the country because of the fighting. Half of the children do not go to school because of the fighting. Another generation is growing up uneducated, ripe for terrorist groups to attract them to fight against the government. And for this never-ending conflict to continue. The pain and sorrow that I felt in these two stories will be here for years to come. Journalist based in Jalalabad, Afghanistan.
All posts
Next post