A dumpster diver picks through discarded food items in the back lot of a supermarket in Berlin on May 17, 2019. (AFP / John Macdougall)

Berlin -- The scene was worthy of a spy thriller. We were meeting our contact at midnight, near a supermarket on the outskirts of southeast Berlin. We’ve been trying for two weeks to meet, exchanging messages over the encrypted Telegram app to avoid any detection by the authorities.

The street is deserted, lit up by yellow street lamps and by the light from the supermarket. A cyclist passes us. A few meters away, the cyclist stops, turns around and returns slowly. He stands in front of me. “David?” A dumpster diver packs food items retrieved from the trash into his bags in the back lot of a supermarket in Berlin on May 17, 2019. (AFP / John Macdougall)

Up until that point, I didn’t know whether my contact was a man or a woman, young or old. I just had a name, Andrea. In front of me stands a young man whose beard and hair seem to form a continuous mass.

“We have to be quick and quiet so as not to attract attention,” he says, locking his bike to a tree.

All the secrecy, all the precautions for a story on... food waste. As part of my research on the topic, I learned that people like Andrea fight against food waste by pillaging the trash of supermarkets at night, salvaging food that is still edible. In Germany, that can be a dangerous occupation -- trash bins that are not on public streets are considered private property. Which means that taking their contents is stealing, punishable by a fine of several hundred euros. Hence the secrecy and Andrea’s insistence that we be quick and quiet.

A simple task for me, as I only have my notepad. But I came to interview Andrea and see him in action with my photographer and video colleagueы, who will have a harder time staying inconspicuous. 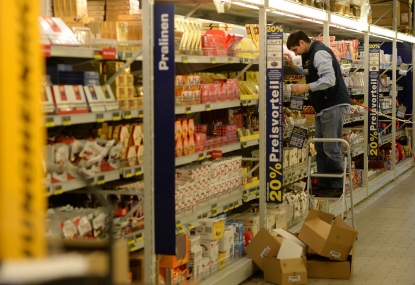 An employee prepares goods at cakes section of the retail and wholesale/cash and carry group Metro supermarket in Cologne, Germany, on December 12, 2013. (AFP / Patrik Stollarz)

Andrea pulls on a balaklava so that he can’t be identified on our video and photo images and we approach the 3-meter metal gate fence that we have to breach in order to get to the supermarket’s trash bins. There are two solutions -- either slide underneath in the 20-centimeters below the gate, or scale it from above. Andrea and videographer Leo are blessed with physiques that let them slide under. I have to go over, as I’ve been enjoying too many beers and German sausages during my time in the German capital; photographer John follows me. Luckily for me I wore sweatpants. Poor John has on his jeans, which of course get stuck on the barrier in a strategic spot between his legs. With jeans ripped but with essentials unharmed he manages to jump down the other side.

Andrea puts on a headlamp and goes to work. We film. The bins are a veritable treasure trove. We find dozens of yogurts, juice and almond milk with expiration dates the following day, ripe exotic fruit, cookies and pasta whose packaging is slightly damaged, Easter chocolate, even truffled olive oil.

Andrea, who has brought a 60-liter backpack to carry away his finds, tells us that he is vegan, so he never takes meat or dairy products. There is certainly enough in the bin that he can pick and choose what he wants. 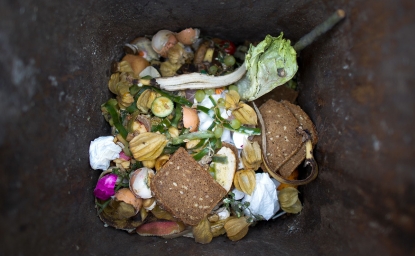 As he rummages, we hear a siren in the distance. We freeze. It fades away, a stern reminder that what we are doing is against the law.

It takes Andrea about 15 minutes to fill his backpack and we turn around. The second time over the fence seems a bit easier. We hurriedly walk away from the supermarket to a small square nearby, where we set up to interview Andrea on camera. A man walking his dog walks past, seemingly uninterested in what must be an odd scene -- it’s nearly midnight and a man in a balaclava with a huge backpack on his back is being interviewed on camera by two others, while a third snaps photographs. 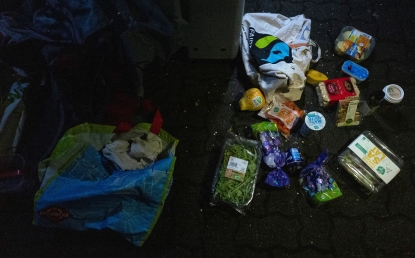 Food items retrieved from the trash by a dumpster diver lie on the ground in the back lot of a supermarket in Berlin on May 17, 2019. (AFP / John Macdougall)

Andrea says that he is 22, a student at university and that he can afford to buy food, but prefers getting it this way “to fight against the overconsumption society.” He goes out a few times a week, sometimes alone, sometimes in the company of like-minded souls. They pillage in supermarket trash bins to recover food. He shares his finds with his roommates and also contributes to collective meals that he and his cohorts organize weekly.

He was caught once, late last year, and is waiting for a summons to appear in court to face charges.

There are a number of groups that operate in Germany fighting against food waste. The country throws away some 18 million tons of food annually, part of 88 million tons that’s thrown away in the 28 countries of the European Union, according to European parliament figures. 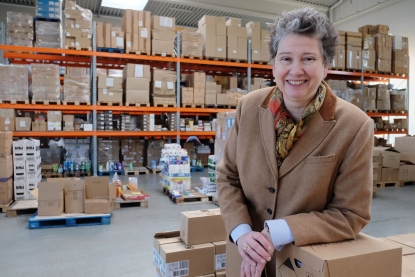 Juliane Kronen, founder of the Innatura cooperative, poses for a picture at a warehouse of the non-profit group on March 16, 2017 in Cologne, western Germany. (AFP / Patrik Stollarz)

“My grandmother always told me, don’t throw away food,” Andrea tells us. “But people prefer to throw it away instead of giving it away for free. How can you justify throwing away food when there are thousands of people, including in our country, who die of hunger?”

It’s hard not to agree with him when you see the amount of perfectly good food thrown away by the supermarket like we did. As we talk, I confess to Andrea that I used to do the same thing. My parents and I used to go through supermarket trash bins in the south of France where we lived. Then when I was a student in Aix-en-Provence and in Paris, I did the same. Mostly I would get fruits and vegetables that were in season and which I wasn’t able to afford on my student budget. The money I saved allowed me to buy good meat at a butcher’s shop instead of having to buy it in a supermarket. 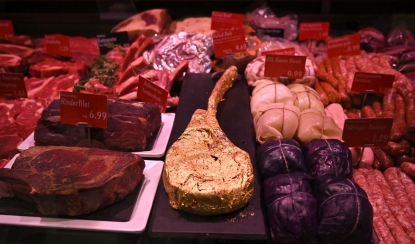 A so-called Tomahawk-steak coated in gold is for sale at the BestBeef store in Berlin's Wilmersdorf district on January 11, 2019. (AFP / Tobias Schwarz) 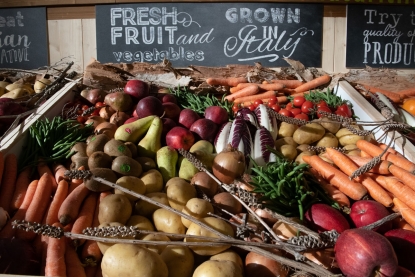 Fresh vegetables are on display at the booth of an Italian exhibitor at the Fruit Logistica fair of the fresh fruit and vegetable sector on February 6, 2019 in Berlin. (AFP / DPA/Paul Zinken)

I decided to do this story partly because of my own past and also because of my own interest in social issues. What I realized was that, social disapproval aside, what Andrea and others like him are doing is actually good for the planet. Why throw away food when you can give it to those who need it? 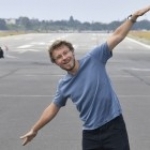 Journalist based in Berlin
All posts 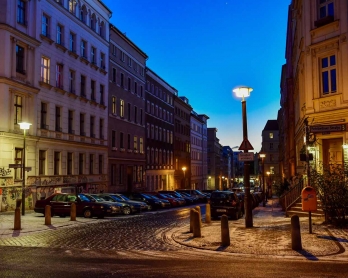 As Americans rolled into town