Supporters sitting under a parasol look at the breakaway riding during the 213,5 km seventh stage of the 104th edition of the Tour de France cycling race on July 7, 2017 between Troyes and Nuits-Saint-Georges. / AFP PHOTO / Lionel BONAVENTURE (AFP / Lionel Bonaventure)

All along the Tour de France 2017 -- “It’s your first Tour?” I heard over and over again over the three weeks that I covered the legendary bike race. “You can’t understand what a Tour is until you’ve lived it from the inside.”

How right they were. Turns out the Tour de France is not just one of the world’s premier physical challenges. It’s also a huge party. 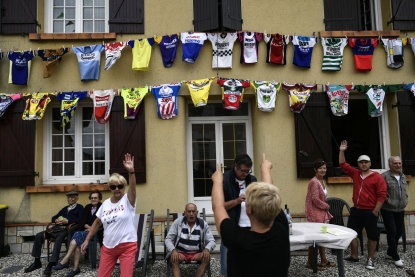 The 11th stage, between Eymet and Pau in southern France. (AFP / Jeff Pachoud)

I’ve watched the mythical race plenty of times on television, but never realized just how deeply entrenched its other side, its fan side, was in the villages all over France. I’m an AFP sports writer based in the southern French city of Toulouse and got called up this year to replace a sick colleague, so only joined the Tour on its third stage, in Longwy. And was plunged right away into the fan fervor that accompanies it. 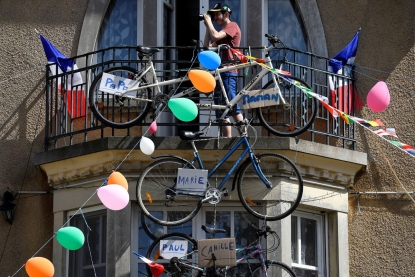 The 4th stage, between Mondorf-les-Bains and Vittel. (AFP / Lionel Bonaventure)

All the streets were blocked, so I had to walk from the train station through thoroughfares bursting with humanity to get to the finish line, where the riders would cross shortly after. It was my first taste of the daily good-natured celebration of “The Bike” and “Ze French” that is as much a part of the Tour as the actual race.

For tens of thousands of people, the Tour is an annual event that offers them a world-class spectacle along the routes of their village or countryside, a day-long revelry as they stretch out picnic blankets, fire up the barbecues and socialize with family and friends, like their parents and grandparents did.

It’s something that many French all over the country grow up with from a young age. Even if they’re not a fan of cycling, they watch the Tour. And thank it for shining a spotlight on their village once every few years. “Long Live the Tour” signs greet you from houses, bales of hay, signposts all along the route, which usually covers around 3,500 kilometers (2,100 miles). 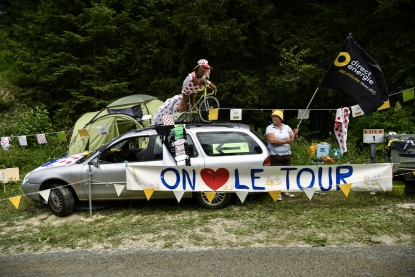 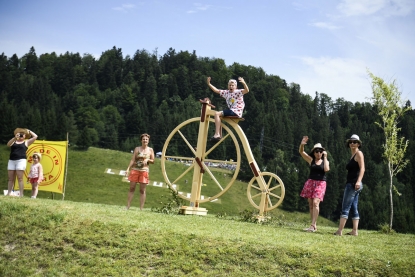 I got the full blast of the spirit of the Tour during my first full day of coverage. AFP covers the Tour in text with six people in two cars -- two francophone journalists, one anglophone, one hispanophone and two drivers, without whom our work would not be possible.

The first car leaves the town of departure and heads straight to the one where the Tour will end up that day. The second follows the course just ahead of the peloton, transmitting any news to the reporters in the press room at the finish line. I got into the second car.

When you do a stage of the tour in a press car, you have the feeling of being a member of a procession that announces the imminent arrival of the riders. At each village, each rotary, each bend in the road, you are showered with hearty and sincere welcomes of the spectators. You can’t help but wave in return, a la Queen Elizabeth II. 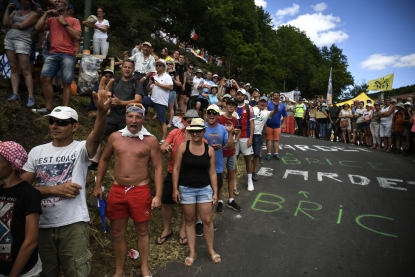 In the mountain passes, where you drive slowly, the fans often literally plant themselves on our windows, asking for any news of the race. “Hello AFP! How are you? Not too hot?” they yell. Meanwhile they are the ones sitting out in the sun for hours at a time awaiting the riders.

The festivities are not always in the best of taste. Sometimes we got sprays of beer on and inside the car. Or a lineup of men would moon us. We’d roll up the windows and roll on. 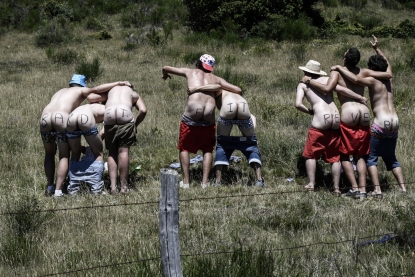 The crowd’s enthusiasm is fed by a caravan that goes ahead of us, with music blaring and pretty women waving atop advertising ‘cannons’ that spray the crowds with freebies -- keychains, hats, cakes. This procession often sets off scenes of hysteria amid the crowd. 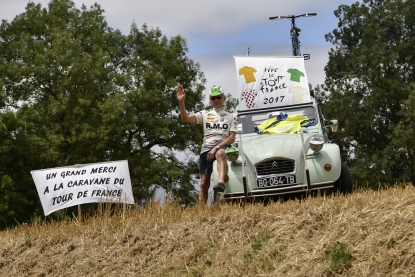 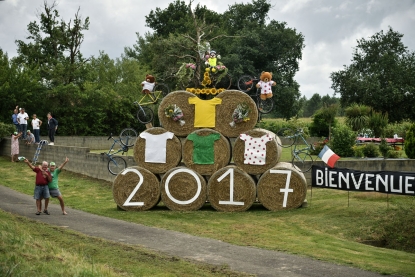 The Tour is also a carnival. You can find yourself with all sorts of personalities -- an Incredible Hulk, priests, superheroes, a guy playing hard rock on an electric guitar while pedaling a stationary bike, or visibly tipsy guys wearing “mankinis.” 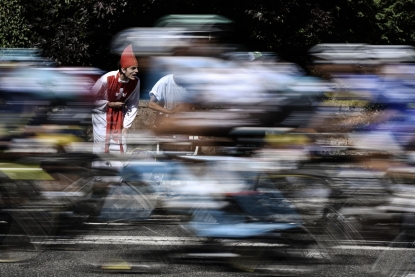 Priests along the 14th stage, between Blagnac and Rodez. (AFP / Jeff Pachoud) 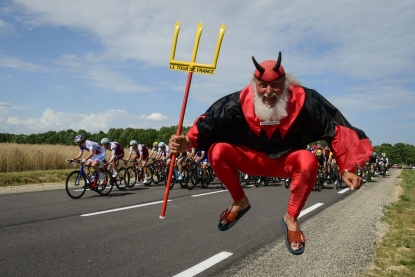 And a devil along the 7th stage, between Troyes and Nuits-Saint-Georges. (AFP / Philippe Lopez)

Sometimes in the face of such a spectacle, you’re glad you’re not a rider who has to face it trying to climb a mountain pass on his bike. 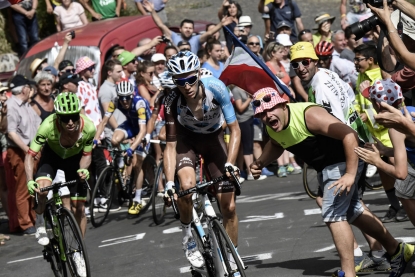 While the Tour may have its legends on the course, it also has plenty of them in the crowds. I’ve met a handful. There was El Diablo, with his trident. There was also Jojo the Clown, the Rooster, The Cow, a guy who wears a helmet with syringes taped all around to protest the doping associated with the sport, or Ricardo the Angel, who follows most stages…. year after year. 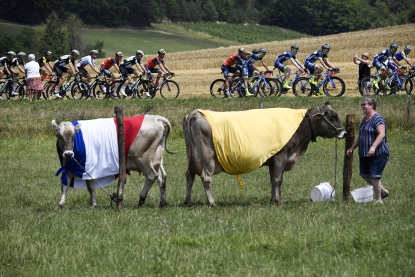 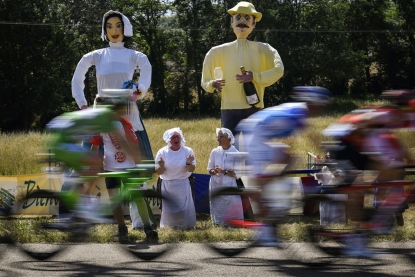 I was curious how a sporting event, even a world class one, can lead people to dress up and spend weeks of their summer following it. One day, I stopped along a road in the Alps to ask Ricardo the Angel about it. He was still dressed in his “civilian” clothes, his wings and halo not yet strapped on to welcome the riders.

“I did my first Tour when I was three years old and still in a baby carriage,” he told me, smiling. “You could say that I was born with it.” 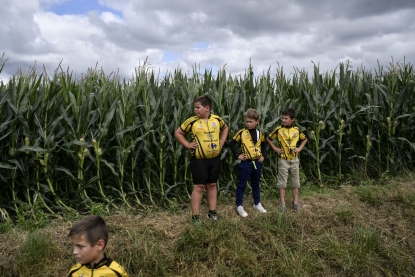 Growing up with the Tour. 11th stage, between Eymet and Pau. (AFP / Jeff Pachoud)

He created his angel character in 1998 after the Festina affair that saw a series of doping scandals during and after that year’s tour. He wanted to both bring a bit of mellowness to the Tour and to compete with El Diablo, who was already active at the time and has since become his friend. Today Ricardo has some 44 Tours under his belt and spends about 3,000 euros each year to watch the race.

Having now covered the Tour from the inside, I now understand exactly what he means. 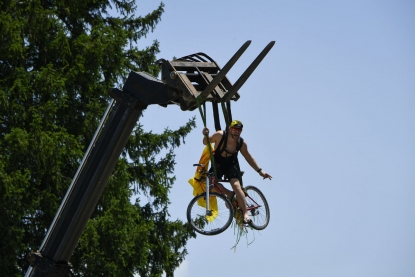 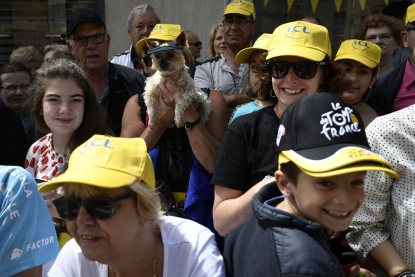 3rd stage, between Verviers in Belgium and Longwyy in France. (AFP / Jeff Pachoud) 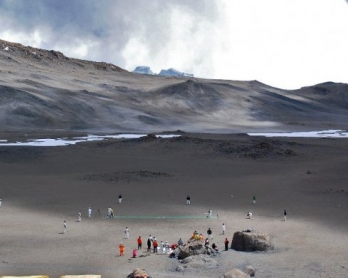 At play in the skies of Paris