A woman balances a load on her head as she crosses a street near India Gate in heavy smoggy conditions in New Delhi on December 6, 2019. (AFP / Jewel Samad)

Every breath you take

New Delhi -- I grew up in one of the most polluted cities in the world. So I thought that I would easily handle New Delhi’s winter, known as pollution season. I thought I was prepared for it. Turns out it’s not something that you can prepare for. 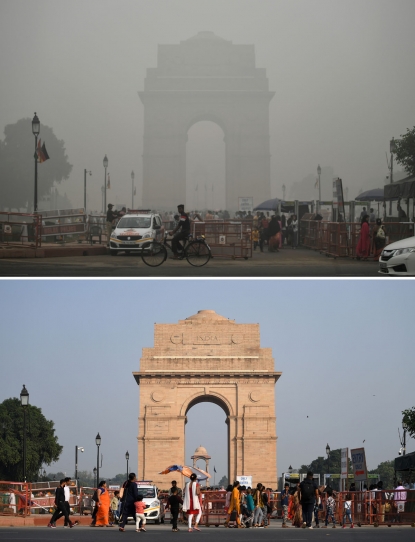 During my childhood in Bangladesh’s capital Dhaka, we just handled the pollution. We played outside, we went about our daily lives normally. How different could New Delhi be, I thought before moving here. As it happens, a lot.

For more than a month now, we have been in an indoor prison of sorts. When you go outside, your eyes burn, you start to cough, you get short of breath. Young children are particularly affected, so my wife and I keep our 5- and 9-year-old girls from going outside as much as possible.

We got here four months ago and pollution season began three months later. Ever since, we’ve been living in a land of air purifiers. There are four air purifiers in my apartment. There is an air purifier in my car. There are air purifiers at work. At my kids’ school there is even an air purifying system outside, whirring next to the playground. And lucky that it is -- it’s nearly the only time they get to be outdoors. 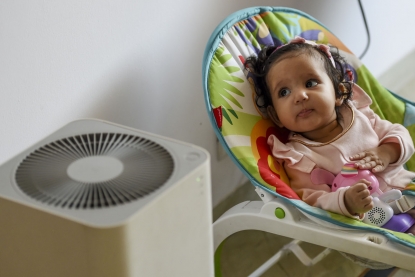 In this photograph taken on November 6, 2019, six-month-old Ayesha looks on as she rests near an air purifier at her residence in New Delhi. (AFP / Money Sharma)

Pollution season in New Delhi lasts during the winter, about three months. There are a bunch of contributing factors. It’s just after the annual harvest and the farmers around the metropolis burn the left-over stubble. 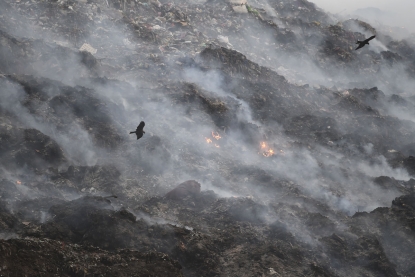 Birds fly as smoke billows from a fire in a landfill on the outskirts of Ahmedabad on November 4, 2019. (AFP / Sam Panthaky) 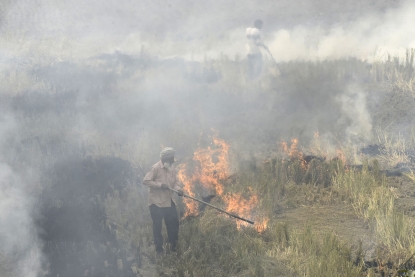 In this photo taken on November 6, 2019, farmers burn straw stubble after harvesting paddy crops in a field at a village near Sultanpur Lodhi. (AFP / Narinder Nanu)

You have a huge number of cars in the city, many of them with diesel engines. 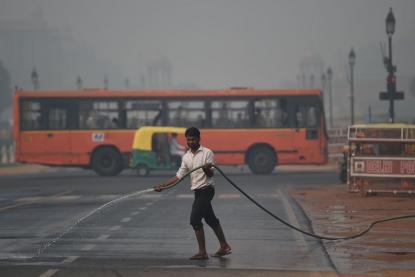 A worker sprays water on a road under heavy smog conditions in New Delhi on November 12, 2019. (AFP / Money Sharma)

I’m most worried about my kids. Children are at most risk, as they can develop asthma in these conditions. So they’re pretty much confined to the house. We keep a close eye on pollution levels and whenever it clears up a bit, we take them to a park. But most of the time, they’re stuck inside the apartment.

Most of the time, they're stucking inside the apartment.

Which of course means screens eventually. Either television or the Ipad. Which we don’t want to give them, but at some point, you just have no choice. It’s either screen time or exposing them to a health hazard. It’s hard for them. Like any normal kid, they want to go out. I can see them getting frustrated.

Luckily their school is very good about it. They make the kids understand that there is air pollution and that it can be dangerous and that they have to wear masks when they go outside. They have an air pollution meter inside the school. Green is ok, yellow it’s getting dangerous, red is bad and purple is the worst. One of my daughters loves the color purple, so this may ruin it for her. 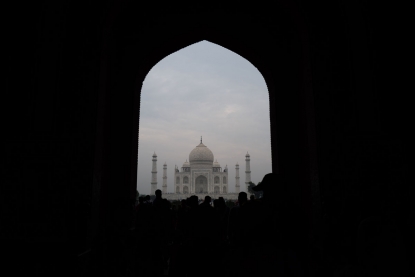 And this year the school installed an outdoor, heavy duty, industrial air purifying system in their outside playground. So the kids can at least go outside and play. The system is quite something. A huge pipe, seven to eight feet long and almost six feet tall, installed in four corners of the playground. Allegedly it can purify the air up to three meters from the ground. So it’s like an invisible cover of clean(ish) air around the space.

My wife has a pretty hard time as well. She doesn’t work and in the US, where we lived before, her days were filled with doing errands during the time that the kids were in school and daycare. Normally, the first few months here she would be exploring, finding out the best places to shop for the things that we need, or to take the kids to when outside of school. But she hasn’t been able to do that. So she has done a lot of reading. 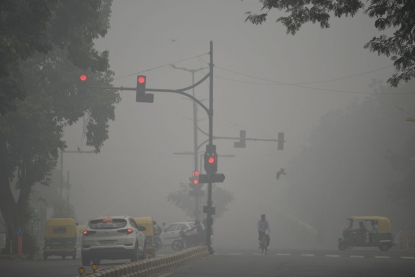 It’s hard for all of us. You’re in a new country, so naturally you want to explore. That’s one of the best things about being in a foreign country -- exploring a new place, a new culture. Instead we’re under house arrest, waiting for the winter to end and the pollution fog to lift.

I’m the one who spends the most time outdoors. I have to, it’s my job to take pictures and to take pictures, you need to be outside. I don’t like wearing the face mask. When I put it on, I feel like I can’t breathe. I know it sounds ridiculous but that’s how it is.

So I approach it the same way that I approach covering any disaster. You just go in, do your job and deal with it. You turn on your disaster mindset.

One day, I wanted to take pictures to illustrate the pollution and spent an hour or two just walking around, looking for good pictures. I didn’t feel it that much while I was walking around, but when I got back to the office, I got a headache, started to cough, had shortness of breath and was dizzy. 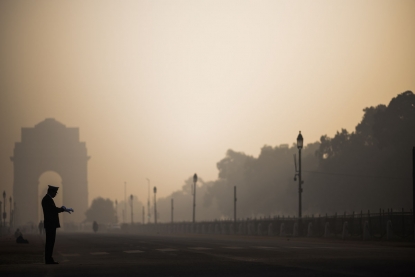 A soldier waits on a street near India Gate in heavy smoggy conditions in New Delhi on December 6, 2019. (AFP / Jewel Samad) 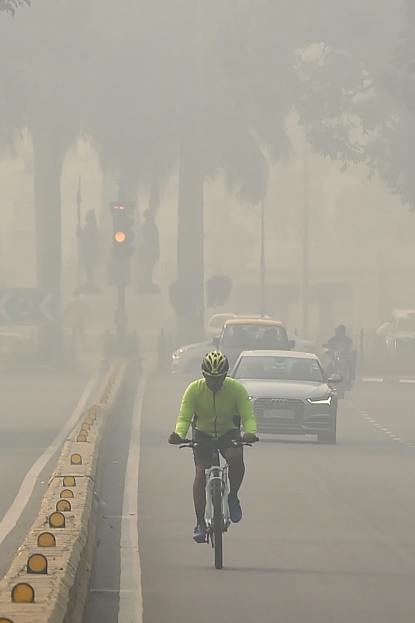 A cyclist wears a mask as he rides under heavy smog conditions in New Delhi on November 12, 2019. (AFP / Money Sharma) 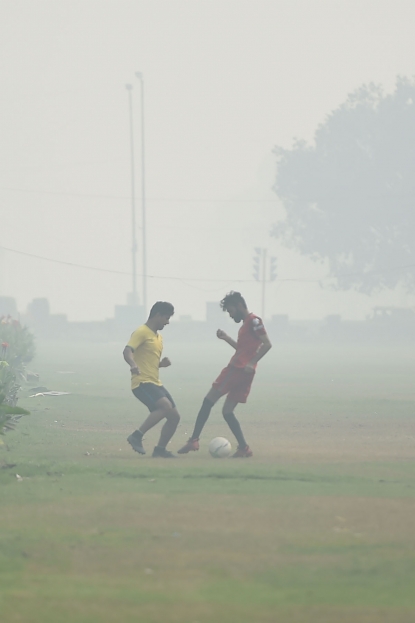 I can understand their point. I don’t remember ever being confined indoors as a kid in Dhaka, even though pollution was bad. I don’t even remember the pollution, to tell you the truth. I’m sure it was there, but I just don’t remember. I left at 22, nearly twenty years ago, living in several countries in Asia before settling in the US, where I spent 11 years and where my children were born. I thought I would handle New Delhi’s with the same ease that I handled Dhaka’s. But I haven’t been. Maybe living in the US made me soft. All I know is that we can’t wait for the end of winter, so we can be outside again and begin exploring our new home... 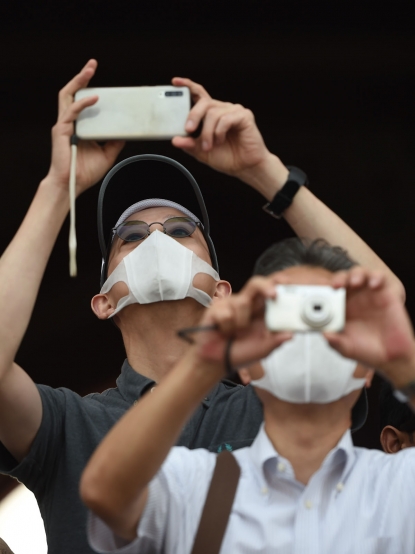 Tourists wear face masks to protect against air pollution as they visit the Taj Mahal in Agra on November 5, 2019. (AFP / Money Sharma) 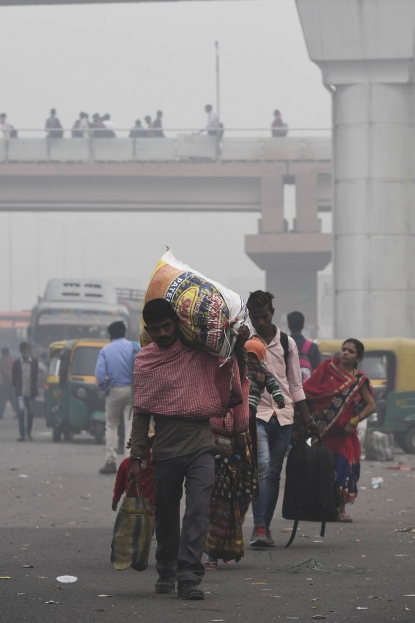 People walk along a street in smoggy conditions in New Delhi on November 4, 2019. (AFP / Prakash Singh) 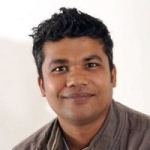 Southeast Asia photo chief, based in New Delhi.
All posts 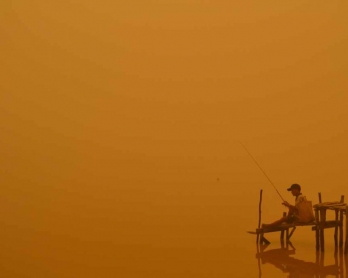 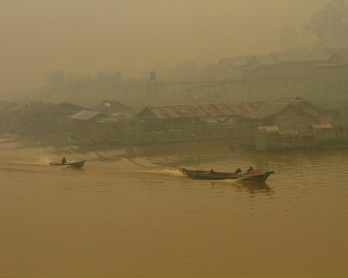