A fisherman by the river in Palangkaraya in October. (AFP / Haris Sadikin)

Palangkaraya, November 13, 2015 -- When my boss asked me if I wanted to go cover Southeast Asia’s worst smog disaster in years from ground zero, I was reticent at best.

I regularly complain about the quality of air in Jakarta. Why go to a place where air pollution levels were soaring to up to ten times hazardous levels? Especially when I had had asthma as a kid? 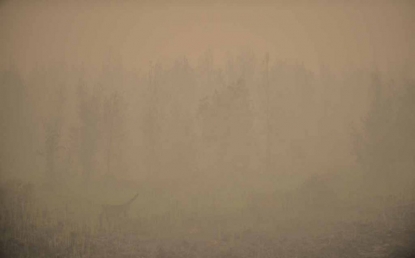 The smog that settled over Indonesia and neighbouring countries in September was the worst the region had seen in nearly 20 years, leaving more than half a million people sick and nearly two million hectares of forest destroyed.

The haze is caused by fires, which break out to varying degrees each year during the dry season as vast Indonesian plantation lands are illegally cleared by burning. The fires were made worse this season by the El Nino effect, which had prolonged the drought, and my bureau had been writing for weeks about the haze, with Indonesian islands of Kalimantan and Sumatra seemingly the worse affected.

The assignment was to go to Palangkaraya, a city of 240,000 where the haze hit the hardest. It was after seeing a picture from the city that I finally made up my mind to go.

The photo showed an old woman selling pineapples on the side of a street, her face covered only by a thin, dirty cotton mask. Surrounding her was the thick, dark, apocalyptic glow of yellow smoke.

I wondered what forced the woman to stay outside when it was obviously dangerous and scary. Who would care about pineapples when you could not even breathe?

I knew then that I should go as there would be many stories to tell from the stricken city. 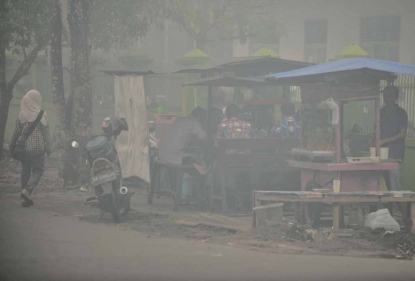 The smog had closed the Palangkaraya airport, so our team -- me, a photographer and a video journalist -- had instead flown into Banjarmasin, a city in the South Kalimantan province some 200 kilometres away.

As soon as the pilot announced that we would be landing in Banjarmasin, I looked outside the window and saw a thick layer of white fog floating in the air. The hot breeze of the equator and the smell of burning trees welcomed us as we stepped off the plane. A woman and her child cross a bridge in Palangkaraya in October. (AFP / Wisanggeni)

It took us five hours of driving along the potholed-covered road to get to Palangkaraya.

On our way, we made a quick stop to visit some evacuees who were forced to leave their homes because they could no longer endure the torment of not being able to breathe.

"This is ridiculous, I am surrounded by forests, why is breathing so difficult," a young woman named Kartika Sari told me from a shelter in Banjarmasin, where she shared a two-bedroom house with nine other evacuees, all sick children and women.

Kartika fled after her toddler daughter started coughing ferociously. She left behind her husband and her job. She worried if there would be a job to return to, but she could no longer tolerate the severe headaches, nausea and trouble with breathing that she felt every time she stepped outside her house. 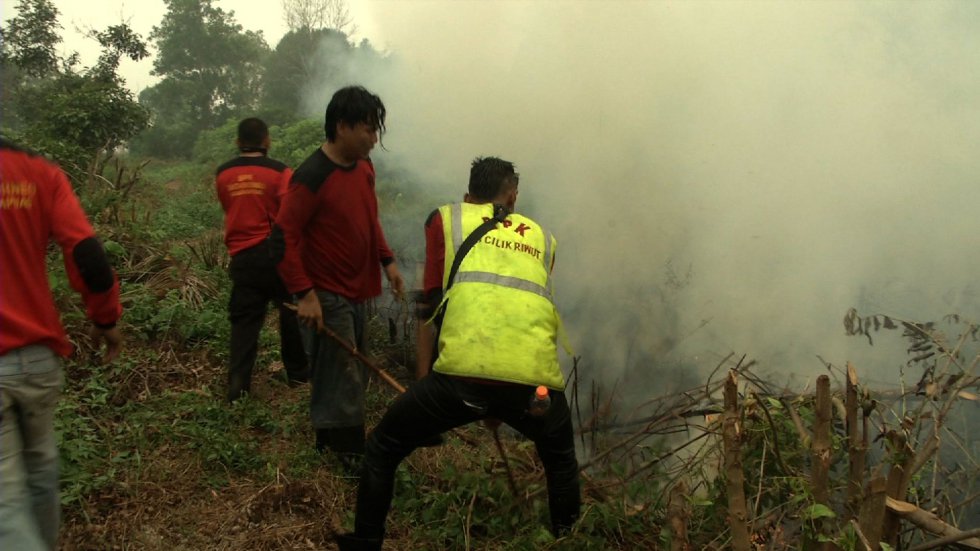 We continued the trip but made a few other stops when we saw some desperate locals trying to fight the peatland fire that was getting clos to their home.

Smoke rose from the scorched earth as policemen, firefighters and volunteers tried to stop the blaze using any meagre tools at hand. Nobody was wearing proper equipment to protect themselves. A woman tries to douse a peatland fire on the outskirts of Palangkaraya in late October. (AFP / Bay Ismoyo)

About an hour before we arrived in Palangkaraya, we drove along the Tumbang Nusa bridge, the longest bridge in Indonesia that stretches for 10.3 kilometres. All along the sides of the bridge were hectares and hectares of burning peat lands and charred tree stumps.

I was stunned. It was like stepping into a horror movie, with a dirty yellow thick fog covering everything andthe air stale, extremely hot and humid. The visibility was probably no more than 50 metres and all cars had turned on their headlights even though it was still midday. 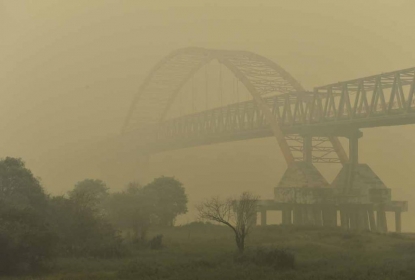 The photographer and videographer immediately set up their equipment to capture the devastating view. Our team had taken protective goggles and masks for the trip, but I wanted to feel what it would be like to breathe without them, like the people who lived here. I stepped out of the car and tried to breathe as little as possible, but my throat was still burning.

Soon my eyes were burning and I started to gasp for air and to panic. I gave up, ran inside the car, turned on the air conditioning and checked my phone to see the air pollution index. It was 1,511, almost five times higher than the hazardous level limit. A few days before my trip, the pollution level soared to nearly 3,000, paralyzing the whole town.

"Try not to think about it, try to breathe normally, your mental state will affect your breathing," our videographer Gianrigo Marletta told me. 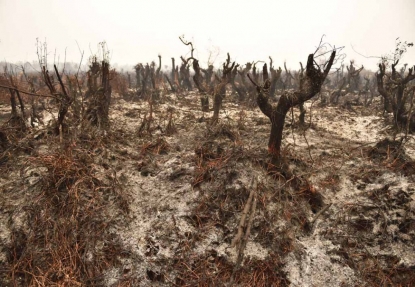 Unbelievable, I thought as I looked around me. How could anyone live like this for months? Imagine if you are inside a room with a chimney billowing smoke and you start to cough. Your first instinct would be to get out of the room and gasp, to try to suck in as much fresh air as possible.

Except in Central Kalimantan, there is no escape for hundreds and hundreds of kilometres. 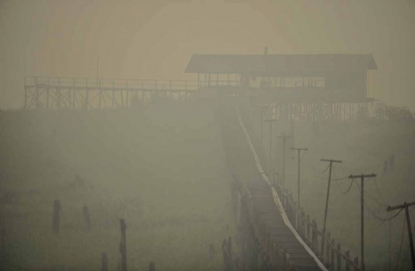 A jetty along the Kahayan River in Palangkaraya is shrouded in haze in late October. (AFP / Bay Ismoyo)

The rest of the trip to the city was almost as bad, with the entire town blanketed by bleak yellow haze. The driver told us the air quality would get even worse in the evening.

The pollution level may have been five times higher than the hazardous level limit that day, but to the locals, it was one of the lowest in the past few months, “only” around 1,500. Some decided to enjoy the "clear" day by leaving their houses to sit by the Kahayan riverbank, the sky above them a foreboding, foggy yellow. I watched them with a mixture of curiosity and disbelief.

Why didn't they leave? Why would they stay to be poisoned? After talking to them I realized that it wasn’t that easy. The smoke made you suffer every day with a headache, chest tightness and nausea, but not enough to make those people pack up and leave their livelihood and homes. 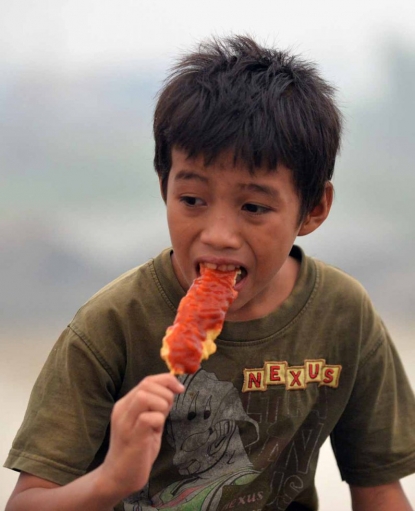 A boy eats a snack on the banks of the Kahayan river as air pollution levels descended to 'only' five times hazardous level limits. (AFP / Bay Ismoyo)

It’s sad to think that when it was not polluted by haze, Palangkaraya was known for its clear blue sky, dense tropical forests and several endangered animals including orangutans and gibbons. 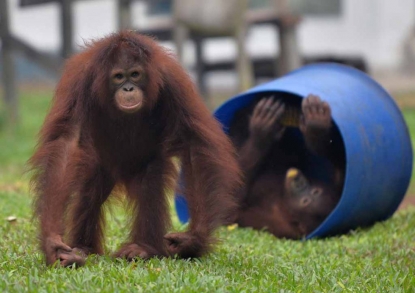 Orangutans play at the rehabilitation centre for the endangered species on the outskirts of Parangkaraya. (AFP / Bay Ismoyo)

Before wrapping up our interviews for the day, we made a last stop to the Doris Sylvanus general hospital. The management had turned its auditorium into a makeshift ward where the locals who had trouble breathing could use 10 oxygen tanks for free.

But the smoke still found its way into this oasis, seeping into the auditorium, where the air was hazy.

At least 200 people queued every day for hours to use the oxygen tanks; some driving from neighbouring towns. Local drugstores sold small, portable oxygen tanks, but since the haze hit the price soared from four dollars to 10 dollars, a prohibitive sum to many in the region, and stocks were very limited. 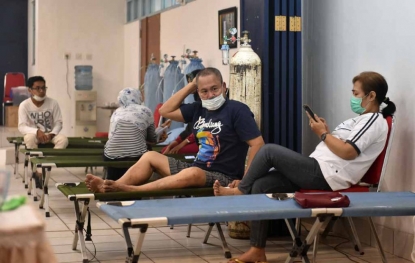 After resting for a night in a hotel, where the smoke managed to seep inside despite the air conditioning, our team headed to an orangutan rehabilitation centre just outside the city, where activists were conducting several operations to rescue the distressed endangered species.

The orangutans at the centre were restless and stressed. The infants were sick and weak, while the adults were depressed and terrified after losing their natural habitat and food source. 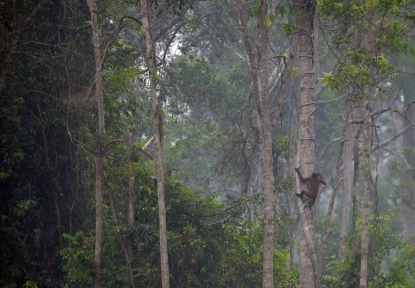 Haze seeps through the trees at a rehabilitation centre for orangutans on the outskirts of Palangkaraya. (AFP / Bay Ismoyo)

“With this haze you will feel headaches, chest tightness, nausea, and fear. The orangutans feel them too but they can't escape, they can't wear a mask,” an activist at the centre told me. The spirit of the activists who bravely put their lives in danger to save the orangutans was inspiring. 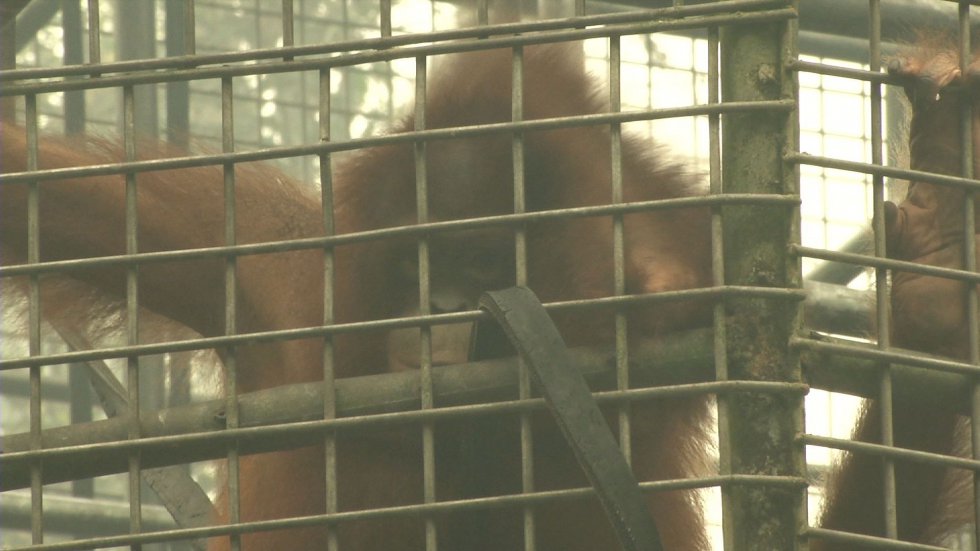 As were efforts by the many local residents who, tired of waiting for the government to act, decided to fight the peat fires themselves.

In every corner of the town, residents, including children, tried to prevent the fires from getting closer to their homes, dousing them with anything they could think of -- a basin of water, a wet T-shirt. 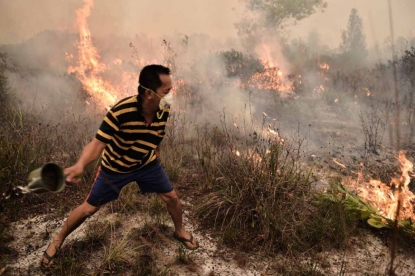 A villager tries to extinguish a peatland fire on the outskirts of Palangkaraya. (AFP / Bay Ismoyo)

We decided to follow volunteer firefighters to see them in action on the ground. One group agreed to let us tag along. Their budget – mainly donations – was so small that many times they had to chip in and use their own money to buy gas and supplies.

Extinguishing a fire burning on peatland is tricky business. Peat fires often go into the soil, smolder and spread beneath the ground and can surface anywhere. To try and extinguish them, the fire fighters had to stomp on the ground to ensure it was solid enough – one misstep and they could bury their foot under the burning soil. 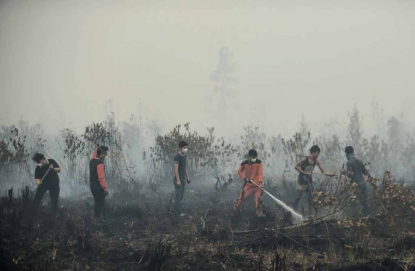 The surrounding smoke was just crazy. Even with the industrial mask and a pair of protective goggles my throat and eyes were burning badly. In that situation, you could only breathe a very short breath, which exhausts you and makes you light-headed.

Later, the firefighters were joined by another team of volunteers -- college students who weren’t able to attend class and, tired of waiting and criticising the government on their social media accounts, decided to act. 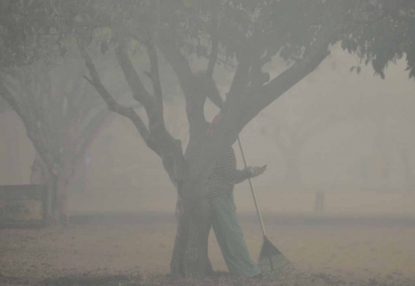 What I had seen in Palangkaraya was frustrating. The earth was being destroyed and people were hurting. They were tired of the fires and tired of the blame. They didn’t know whether the disaster was the fault of the giant palm oil companies, greedy local farmers, or the government’s slow response to prevent the annual occurrence.

They were exhausted and they just wanted it to be over. 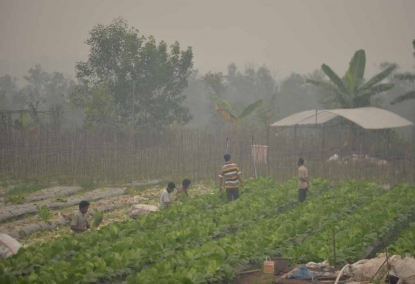 Farmers work their land on the outskirts of Palangkaraya. (AFP / Bay Ismoyo)

When I landed back in Jakarta, I thought to myself about how I used to complain about the capital’s heavily-polluted air, about the fumes from the old buses and the factories.

That night I did something I thought I would never do. I breathed deeply, grateful for Jakarta’s “fresh” air. 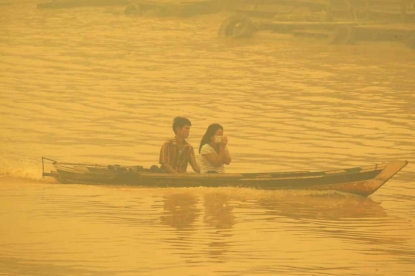 A couple crosses the river in Palangkaraya in October. (AFP / Wisanggeni)