Photographer based in Paris. 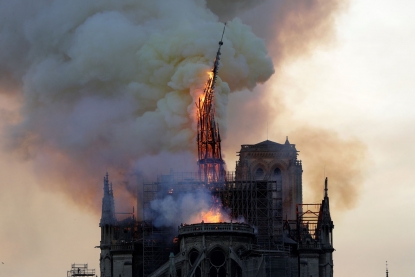 As Notre Dame burned, and thousands spilled onto the streets and quais of Paris to watch the spectacle, AFP journalists were recording the historical moments from every which angle during the 15 hours that it took some 400 firefighters to put out the flames ravaging the 850-year-old structure. Here are a few of their stories. Dead soldiers in the snow

"It was bitterly cold on the hilltop, with an icy wind whipping up gusts of snow. We had come to attend a ceremony in memory of fallen pro-Russian rebels -- held at the vast Savur-Mogyla World War II memorial," writes AFP photographer Eric Feferberg. "It is a truly Dantean complex that was partly destroyed in fighting between Ukrainian government troops and separatists in July and August. Being there, you had both a sense of real beauty and nostalgia, and of utter desolation."